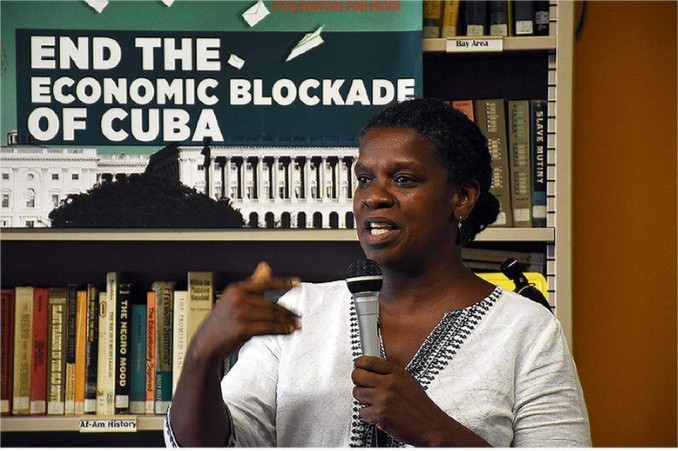 Oakland, Calif. – IFCO/Pastors for Peace Executive Director Gail Walker and Isel Calzadilla Acosta, founder of “Las Isabelas,” were enthusiastically greeted here on July 11 at an evening of solidarity with Cuba. “Las Isabelas” is the first lesbian organization in Cuba.

It was a full house at the Niebyl-Proctor Marxist Library, where the Pastors for Peace caravan made a stop as part of its vital work raising awareness about the reality of U.S.-Cuba relations. The event drew a number of LGBTQ activists, who were particularly interested in hearing Calzadilla’s perspective on Cuba.

Calzadilla, a leading lesbian activist at the forefront of the struggle against anti-LGBTQ bigotry in Cuba, consults with the Cuban National Center for Sexual Education (CENESEX) to develop strategies. She is a member of the Federation of Cuban Women and a nurse by profession. Calzadilla represented CENESEX at the World Conference of the International Lesbian and Gay Association, “Decolonizing Our Bodies,” held in October 2014 in Mexico City.

Walker has organized several U.S.-Cuba Friendshipment caravans and educational delegations to Cuba. IFCO has also continued to facilitate the process of enabling dozens of U.S. students to study medicine in Cuba under full scholarship and to expand its role as a fiscal sponsor for grass-roots organizations working for social justice.

The event was sponsored by the International Committee for Peace, Justice and Dignity.