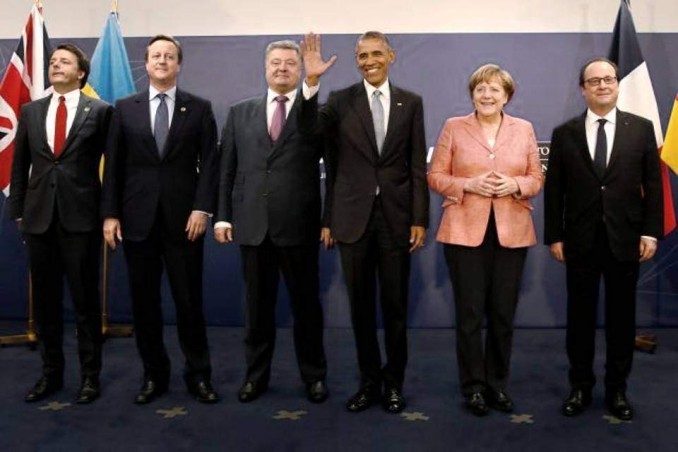 President Barack Obama had to rush his participation at the NATO Summit in Warsaw, Poland. As head of the imperialist U.S., he was mobilizing European countries to confront and threaten Russia, but had to spend much of his time responding to the crisis unfolding in the U.S. itself.

While Obama professed that the U.S. was a united country, other articles in this issue of Workers World show that the U.S. consists of both an oppressor state and oppressed nationalities. He spoke of making “peace” at home between the oppressive state — the racist police, prisons and legal system — and the Black and Brown communities. But his role in Warsaw was to increase the danger of war in the world.

The July 9 photo the New York Times published showed Obama shaking hands with the heads of Italy, Britain, Germany and France — all major former colonialist powers — and the president of Ukraine. Including Ukraine emphasized imperialist support for the regime these powers embraced when they backed neofascist elements to take over in what had once been a Soviet republic.

Mass protests of people in Warsaw and other European capitals against NATO showed that the anti-war forces in Europe saw Obama not as a peacemaker, but as symbolizing the threat of another war. Just to hold the summit in Poland, which borders Russia’s Kaliningrad province in the north and Ukraine to the east, is itself meant to provoke a nuclear-armed Russia and raises the danger of a devastating war.

To underline that threat, NATO had held “Anaconda” war maneuvers through early June, in which 31,000 troops and armored vehicles rolled eastward through Poland and 6,100 troops, 45 warships and 60 warplanes maneuvered in the Baltic Sea.

In 1990, during negotiations between the U.S. and then-Soviet leaders, Washington promised not to move NATO eastward. An article on Nov. 26, 2009, in the German magazine Der Spiegel made clear that during these negotiations: “There was no doubt that the West did everything it could to give the Soviets the impression that NATO membership was out of the question for countries like Poland, Hungary or Czechoslovakia.” They lied. NATO has since expanded to surround Russia from the west and south. (tinyurl.com/nvm476v)

NATO now includes not only Poland, Hungary and the former Czechoslovakia, but also some of the former republics in the Soviet Union, including Georgia. The U.S. also pulled both Sweden and historically neutral Finland — which had for decades been a neutral buffer between Russia and the West — into the recent anti-Russia war exercises. Since the Soviet Union dissolved in 1991, NATO waged a war on Yugoslavia from 1995 to 1999 that dissolved and destroyed that multinational country, as well as intervening in Afghanistan, Iraq and Libya.

NATO had already, before the summit, agreed to establish battalions of 800 to 1,200 troops from different countries in Poland, Lithuania, Estonia and Latvia, along with a brigade of four additional battalions stationed in Bulgaria and Romania. U.S. officers will command the battalion in Poland, which is almost completely made up of U.S. troops.

Although it was U.S. and NATO military intervention in Afghanistan, Iraq and Syria that disrupted those societies and caused mass migration, NATO leaders have used the migration crisis as a pretext for more intervention in the destabilized countries, specifically Afghanistan. NATO’s other response to the migration/refugee crisis has been to deploy naval forces to stop ships bringing refugees across the Mediterranean.

NATO agreed July 9 to use troops from various countries to train Iraqi government forces. On July 11, the U.S. announced that it would send an additional 560 troops to Iraq to take part in the fighting for Mosul, a major northern Iraqi city of 1.5 million people.

On the way back to the U.S., Obama visited Spain, including a stop at a U.S. military base in the south of the country. In response, thousands of people demonstrated in Madrid on July 10, saying, “Obama go home” and “No NATO, no war.” (Email release from Red Roja, July 10)

In the United States, where anti-war demonstrations also raised slogans protesting racist police killings in the U.S., there were anti-NATO protests in New York, San Francisco and Los Angeles.