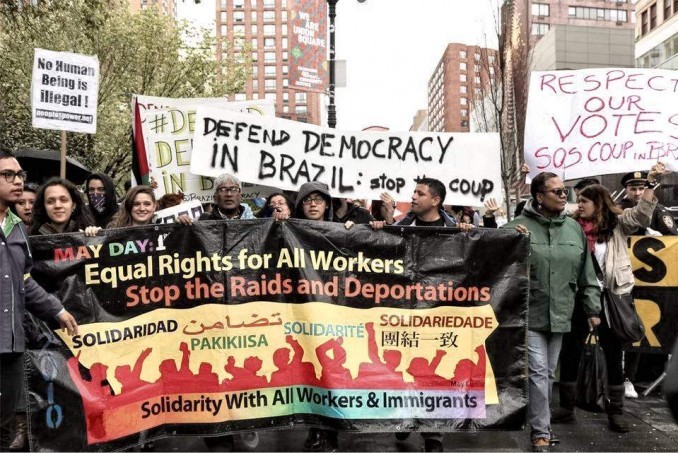 No doubt, there is hatred of the European Union on the left in Europe.  The EU is an anti-worker, reactionary conspiracy on the part of European imperialist bankers to intensify the exploitation of workers and to wage war on the oppressed. However, those who think that the Brexit vote was progressive are missing the point.

You cannot separate the vote to leave the EU from the racist, anti-immigrant campaign that was central to it. Moreover, nowhere is the left benefiting from the vote, but racist and fascist forces are.

No, the task is for the working-class movement to take the political initiative away from the racist and fascist forces.

The reason why there is some confusion about understanding and analyzing what happened with this vote is because there are contradictions. The ruling class of the world is not happy about what happened. One of the important things for capitalism is having their political establishment — the ruling class parties — be able to control what happens in their capitalist elections.

Why did they spend so much money and time? Why do the media prop up these political institutions of capitalism and imperialism? So that they can manipulate the working class and the masses and that things come out their way in elections. It is a symptom of the political situation of capitalism that is in deep crisis that things are not going their way. They’re not that thrilled about Donald Trump but that doesn’t change Trump’s character.

This was a big blow to the big bourgeoisie, to the extent that it’s crumbling in many ways. This was a blow to their establishment for what they’ve been trying to do ever since the end of the first and the second imperialist world wars, that is, to strengthen these institutions, whether it’s NATO or the United Nations or the World Trade Organization or NAFTA or the European Union, in order to  compete but also to have these institutions and these agreements help them wage their war to exploit the workers at a greater magnitude. We will see the fallout. It’s a contradiction. That is one point.

But it is a mistake to downplay the racism. We don’t have to live in Manchester or London or any other place — speaking as a Black communist in New York City — to understand racism and understand what a lot of white workers and a lot of white middle-class people can be pulled into.

Now what’s happening is that globalization is pauperizing even those formerly relatively more privileged workers, here and there. They’re getting frantic, and this should drive them towards revolutionary socialism and against capitalism and to embrace their Black and Brown sisters and brothers.

We have not given up on the white workers, but we’re not naive either. We know, especially if there’s the absence of a strong revolutionary alternative, racists and fascists will pull them in and tell them that the way to bring it back to the way it was — when you were a little more privileged — is to turn the clock back, meaning close the borders and push out all those Black and Brown workers that you see driving cabs and ringing cash registers, etc. This is what’s going on there.

We’re not writing white workers off, but we are not going to abandon the oppressed workers, who frankly — and there are exceptions to this but historically this is generally true — are the vanguard of the struggle for revolutionary change. We hold them up. We hold them up unabashedly, unapologetically.

Challenges for the movement

Our Party more than any other party is against ridiculous, opportunist, self-serving polemics. We have nothing whatsoever to gain from it. We are completely open to discussing everything with comrades or potential comrades anytime anywhere. If there’s something that they can shed light on that we don’t know about, okay.  But we refuse to be naive about racism.

We would advise them: don’t get dug into a bad position; don’t become captive because for some reason you decided to downplay and minimize the role of racism.  Based on that, we can all go forward.

Actually, this is such a big event coming at a time when the capitalist system is so fragile. This is one of the contradictions, too. This is what has them worried.  It’s really a continuation of an earlier point. The capitalist system is so fragile that anything, any political upset, any economic upset, whether it’s in the financial markets, whether it’s the collapse of a bank, it can be the snowball, so to speak, that starts the whole thing crumbling. That’s good.  But that doesn’t negate the danger that this poses.

Why is it such a tremendous danger now? We don’t want to sound like moralists. We are scientists. We are communists. We are dialectical materialists. That’s how we view this development.

What has globalized high-tech capitalism done? Ultimately, it has created two roads for the working class. Either we will allow capitalism in its desperate epoch of decay and death to force workers into more intense competition with each other for disappearing, low-paying jobs on a vicious and violent scale. That’s one direction. Or workers will begin fighting not just based on nationality or geography but more and more on the basis of seeing each other as a global class, as the capitalists do.

We would argue with anyone, including our British comrades, those who have a strong position, those who agree with us, and those who are in between, that this is the question. This is a central question that is posed by this election. What road for the working class? Break it up and as the capitalists would prefer we do, fight each other, close the borders, blame the immigrants, not the capitalists.

Or do we have a strategy that can lead to uniting the workers more and more on a global basis? Can someone show me the argument that shows that this is what the vote for Brexit did? The Party is not perfect but we don’t see it.

But just finishing the point, it’s a huge development. It mirrors political developments in this country of the working class movement, which is confused, to a large extent demoralized — talking about the vanguard elements — and that this has been going on for a long time, too long as we all know, based on setbacks like the collapse of the Soviet Union and all sorts of other things. This is a challenge.

These are the big questions on the table. No matter what disagreements we have now and historically with other groups, Workers World Party is prepared to sit at that table.

This article is based on closing remarks given by Workers World Party First Secretary Larry Holmes at a June 30 meeting in New York City.  Go to youtu.be/6-r_fxzMF00 to hear opening and closing remarks.