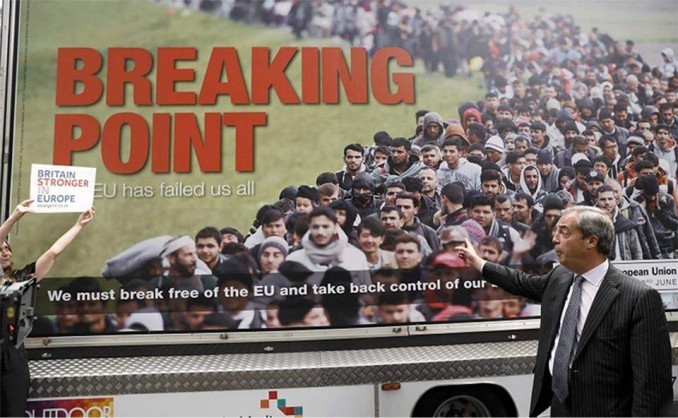 The Brexit referendum in Britain is the result of a reactionary, racist campaign by the right wing of the British ruling class, which pushed through the Leave victory and took Britain out of the 28-member European Union.

The working class and the middle class of Britain were confronted with a referendum, called for by Conservative Prime Minister David Cameron, in which they were given an onerous choice: remain in an imperialist economic bloc that has imposed austerity and anti-working-class policies on hundreds of millions, or choose the Leave option led by a racist, demagogic campaign to leave the EU on the basis of anti-immigrant rhetoric.

The initiator of the Leave political position was Nigel Farage, head of the racist, anti-immigrant United Kingdom Independence Party. The Leave forces turned the campaign into a referendum on immigration.

UKIP has become the third-largest party in Britain, getting 4 million votes in the last election. It has done this by stirring fears about immigrants, especially since the refugee crisis with Syrians and others fleeing war in the Middle East.

UKIP leader Farage publicly stated in March 2015, “There is an especial problem with some of the people who’ve come here and are of the Muslim religion and don’t want to become part of us. People do see a fifth column living within our country, who hate us and want to kill us.” (The Guardian, March 12, 2015)

Farage and UKIP also target Eastern European workers, such as Poles and Romanians, who are exploited as cheap labor in Britain. He warned of a “Romanian crime wave” in 2014. He proposes to institutionalize job discrimination by legalizing “British jobs for British workers.”

The campaign for Leave was filled with slogans and graffiti denouncing Poles and Muslims and calling to “make Britain great.” It spread the word, falsely, that Turkey is to become a member of the EU and then Britain will be flooded with Muslims.

One of the adherents of this camp assassinated Jo Cox, a Labour Member of Parliament known for supporting the rights of immigrants. She was killed the day she was scheduled to address Parliament with a pro-immigration speech.

Boris Johnson, of the Conservative Party and the former mayor of London, is head of the Leave campaign. Around the time of Cox’s assassination, the campaign put up a billboard/poster with a picture of thousands of Syrian refugees and the caption “The Breaking Point.” The photo was actually taken at the Slovenian border. The poster was denounced as false all over Britain by the Remain forces and had to be taken down.

The vote to Remain among whites was 46 percent. Among the oppressed the vote was as follows: Asians 67 percent, Muslims 70 percent, Chinese 70 percent, Hindus 70 percent, Blacks 73 percent. This speaks volumes about the racist character of the Leave vote. (Independent, June 25)

The largest Muslim organization, the Muslim Association of Britain, voted to Remain because, among other things, a vote to Leave would “increase the levels of hate crimes against British Muslims.” (Sunday Express, June 26)

Sayeeda Warsi, a former minister of the ruling Conservative Party, quit and switched to the Remain camp because of “spreading lies, hate and xenophobia.”  She added, “I don’t want the Leave campaign to be running this country.” (Express Tribune, June 27)

The Remain forces in the Conservative Party, led by Cameron, based their arguments exclusively upon the threat to the economy. Of course, this was important for the workers because leaving is a threat to the economy and jobs. But Cameron and his forces never mentioned the danger of Islamophobia, the attacks on Poles and Romanians, nor did he admit that racism was a fundamental issue in the campaign.

Jeremy Corbyn, head of the Labour Party, did come out against hate and Islamophobia and visited a mosque to show solidarity with the Muslim community. This was in spite of the fact that Corbyn has a history of progressive opposition to the EU.

From the anecdotes and statistics above it would seem clear that it was better to vote Remain while giving an anti-imperialist, anti-EU explanation that showed solidarity with the oppressed than to remain silent and abstain, leaving your position unknown. Also, whatever anti-imperialist arguments are made, it is clear that the Leave movement is a right-wing movement with a flagrantly racist agenda.

Showing solidarity with the oppressed is particularly urgent in light of the widespread refugee crisis and the crisis of immigrant workers — from the Middle East to the southern borders of the United States. Working-class opposition to Leave would be a good answer to Donald Trump, who wants to build a wall to keep Mexicans out and stop Muslims from coming to the U.S. Trump flew to his golf course in Scotland and announced that he thought the Leave vote was a good thing, despite the fact that Scotland voted to remain.

What happened in Britain is happening throughout the imperialist world. The long economic crisis — the inability of capitalism to come back from the shock it received in 2008-09 — is undermining employment, wages and working conditions everywhere. Austerity is a universal policy on Wall Street and in Frankfurt, Paris, London, Rome and Rotterdam.

To be sure, the Leave vote struck a blow at the EU. But that blow is hardly to the advantage of the working class, even if it brings havoc to imperialist commerce and finance capital. The British vote to Leave the EU is now being hailed by the National Front in France, by the Alternative for Germany, by the rightist Democratic Party of Sweden, by the right wing in the Netherlands, Austria and Hungary and by Donald Trump.

All these ultra-right, near-fascist and racist forces see the Leave vote as an opening and are bound to become more aggressive. It will not be to the advantage of the workers and the oppressed if the EU disintegrates into blocs of capitalist right-wing governments.

They don’t want the imperialists from the continent, who have had to make certain concessions to the working class over the years, to be telling them that they have to give four weeks’ vacation, or paid maternity leave, or comply with environmental regulations set in Berlin and Paris.

These are the forces that have triumphed in the Brexit referendum. They are fanatics who in their rabid chauvinism have injured their own export position with regard to the largest capitalist market in the world, with 500 million potential customers. They have jeopardized their position as the financial hub of Europe. They have courted an economic crisis that will have dire consequences for their profits and for the workers.

The EU had $741 billion worth of investments in Britain as of 2014. All these investments are now stranded outside the EU, damaging U.S. and British financial interests. The U.S. has 2,750 companies in Britain, with about 1.2 million workers and $558 billion invested there. These include the biggest banks — Morgan Stanley, Citibank, JPMorgan/Chase, Goldman Sachs, among others — who may have to apply to the EU now for licenses, etc. (Revolutionary Communist Group, May 26) Of course, all financial and commercial arrangements are subject to negotiations, but the immediate effect is a sharp blow.

The way to strike a blow from the left at the EU is to open up a working-class campaign against European capital — to resist the rule of the banks and the multinational corporations across international borders. The French workers are engaged in a fierce battle against the Hollande regime. It would be very timely for the labor movement and the radical movement in all of Europe to open up their own struggles of solidarity — and not just symbolic struggles.

This is easy to say but difficult to do on short notice. But if the workers’ movement of Europe could begin to turn itself around from being reactive and defensive and think in terms of fighting — not just the EU, but the capitalist system — on a continentwide basis, that would be a great step forward.

A struggle against the EU could be a struggle against the austerity being imposed on Greece. Such a struggle would have been timely when the Syriza government came to office in 2015 and became the first government in Europe to openly oppose austerity. It was, of course, a social democratic regime that could not carry such a struggle through by itself against German finance capital and all its cohorts, and it finally capitulated.

A class for itself

Karl Marx said that the working class must become a class “for itself.” That means it must be conscious of its class position in society and the position of all other classes, especially the ruling class. Above all, the working class must be conscious of special oppression. It must see how the attempt to divide on the basis of immigration status as well as race, color, gender and sexual orientation is a lethal instrument used against solidarity and meant to obscure the real enemies: the rich, the exploiters, the possessing classes.

Marx also said that the working class has no homeland. (This does not apply to the nationally oppressed.) What is common to all workers is that they are exploited by the bosses, that they are forced to sell their labor power on a daily basis. This is true of British workers, Greek workers, Irish workers, U.S. workers, South African workers or Venezuelan workers. Our class must resist seeking advantage over each other on a national basis.

When that day comes, the days of the capitalist class will be numbered.