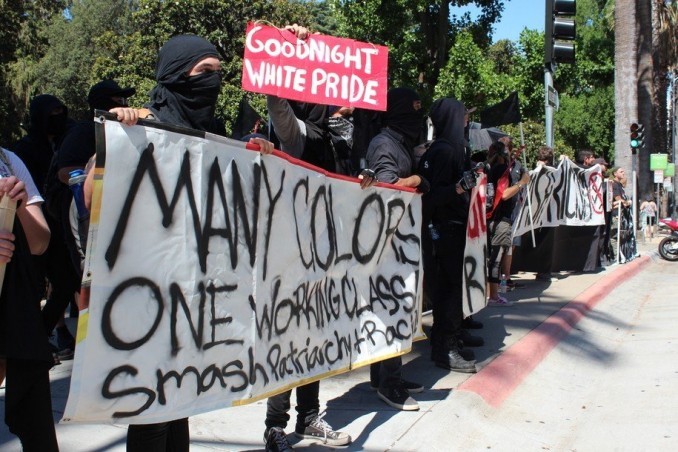 Sacramento, Calif. — Hundreds of anti-fascists from Sacramento, the Bay Area and across California converged here on June 26 and stopped an openly fascist rally from taking place on the steps of the state Capitol building.

A call to action from the anti-fascist group Antifa Sacramento said it was “organizing a direct action to confront these bigots, deny them a platform to promote hate and to make sure they know they are not welcome on our streets or in our communities.”

Members of openly fascist groups, including the so-called Traditionalist Workers Party, had obtained a permit to hold a rally at the Capitol. According to Antifa Sacramento, “The founder of TWP is Matthew Heimbach who is closely affiliated with several white power and neo-Nazi gangs throughout the United States, including the Sacto Skins, Golden State Skinheads, National Socialist Movement, California Skinheads (CAS), Blood & Honor and the Ku Klux Klan.”

The struggle to stop the fascists played out over a number of hours, with the anti-fascists showing up before 9 a.m. to hold the area and prevent the fascists from having any opportunity to hold their noon rally. State and local police were there in full riot gear, clearly to protect the fascists and enable them to hold their rally. The crowd saw through this and chanted, “Cops and Klan go hand in hand.”

When about 20 fascists showed up, the crowd gave chase and a number of melees ensued. Seven counterprotesters were hospitalized as the fascists managed to stab at least four people and cause blunt-force-trauma injuries to three others. Several of the injured were African American, and at least one was a transgender person. It’s not clear how the Nazis managed to target these particular people, as the counterprotesters were largely white. But there is no doubt these victims were chosen based on the racist, homophobic ideology of their attackers. The Nazis took some injuries as well.