On May 31, the National Labor Relations Board — no trusted friend to labor — decisively curtailed bosses’ justification for hiring “permanent replacements” for workers “forced to strike for economic reasons.” In the important 2-1 decision between the Piedmont Nursing Home in Oakland, Calif., and SEIU/United Health Care Workers West, the board ruled that bosses must prove they do not have other, “unlawful” motives for permanently replacing striking workers. Over the past 35 years since President Reagan fired all PATCO air traffic controllers in 1981, the threat of replacement has been the stick that the bosses hold over the workers. No wonder the number of strikes, theoretically legal in the U.S., has dropped sharply. (dclabor, May 31) Some companies have even threatened to hire scabs before a strike begins, which is what happened at Piedmont in 2011.

This ruling could not come at a better time. While bosses are pressing workers for deep concessions, more and more unions are taking strike votes and forcing the bosses back to the negotiating table, as happened in the successful Verizon strike. Though capitalist mouthpieces like the U.S. Chamber of Commerce and the Wall Street Journal have not yet responded to the Piedmont decision, that doesn’t mean the ruling class will accept it. The crisis of capitalism at a dead end grows and deepens. Stay tuned. 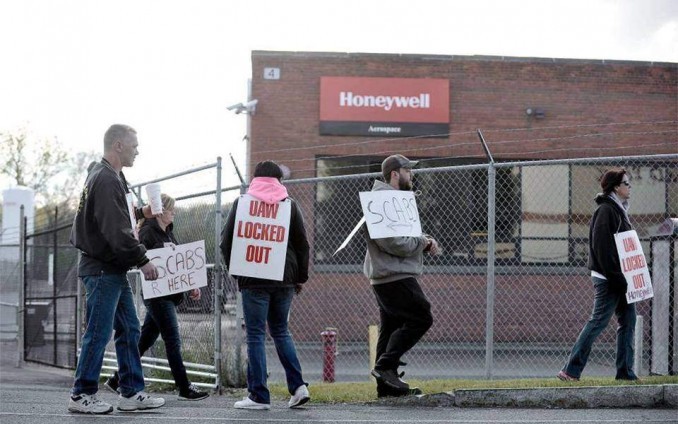 Case in point: The nearly 400 aerospace parts workers represented by the United Auto Workers at two Honeywell Aerospace plants — Local 9 in South Bend, Ind., and Local 1408 in Green Island, N.Y. — must have known something was up when the company had “replacement workers,” supplied by a notorious union-busting firm, observe the workers doing their jobs in March. They found out on April 20, when Honeywell offered contract terms that would double health care premiums for a family of four to $114 weekly, plus a per-person $350 deductible. The UAW estimates that some workers would then be taking home less than $15 an hour! In addition, the contract would unilaterally increase health care costs each year of the contract, while the security contract clause would be weakened, allowing the company to contract more work to nonunion employees. No wonder the membership of both locals voted down the union-busting contract as their five-year contract expired on May 3. On May 9, Honeywell locked out the workers in both plants. The unions and Honeywell are currently in talks with a federal mediator.

Over the last five years, Honeywell has locked out workers across the country in four separate instances while increasing its profits by 152 percent. Mike Elk, writing on paydayreport.com, states, “The workers expect the lockout to go on for several months as it appears that the company is digging in to fight them tooth and nail.” Honeywell even appealed granting unemployment benefits to the locked-out Indiana workers, in violation of a state law. (May 27)

The question remains: Will the recent NLRB ruling uphold union workers’ right to a job if Honeywell tries to hire scabs as “permanent replacements”?

After more than 400 aerospace parts workers at Triumph Composite Systems in Spokane, Wash., walked off the job at midnight on May 11 and set up a picket line, the company shut down the second and the third shifts, declaring the members of Machinists Union District Lodge 751 locked out. The union is fighting to get rid of Triumph’s unequal two-tier pay system, which eliminated pensions and offers significantly lower wages for newer hires doing the same work as higher-paid co-workers. Overall, the union is fighting so all workers have fair wages, retirement security and reasonably priced health care coverage, and for their jobs to stay in Spokane, rather than being moved to Mexico as the bosses threaten.

To mark the first month on the picket line, District 751 called a solidarity rally on June 10. Thanks to broad support from area unions and the Spokane community, the rally “lifted spirits for everyone involved and reminded us that an injury to one is an injury to all,” noted IAM 751 President Jon Holden. Meanwhile, at the request of federal mediators, the District 751 negotiation committee is returning to the bargaining table on June 14-15, even though Triumph has not changed its position on the wage structure or pension benefits. Negotiators vowed to continue the fight, adding that the union’s struggle is gaining support across the IAM and the labor movement in both the U.S. and Canada. (iam751.org, June 13)