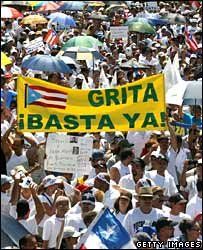 Just as capitalism is at a dead end, the colonial status of Puerto Rico, the so-called Commonwealth, is in the same position, with no way out.

June 9, 2016, will go down in history as the day of the death of the Free Associated State (ELA).

Following a 6-2 vote, Judge Elena Kagan wrote for the majority that “the final source of Puerto Rico’s supervisory power is the federal government, because when we trace the path of that authority, we arrive at the gates of the U.S. Capitol, thus the ELA and the United States do not have independent sovereignties.” Plainly, it is the U.S. Congress that gives the orders in Puerto Rico; in other words, PR’s colonial status is publicly confirmed.

Justices Stephen Breyer and Sonia Sotomayor, issuing the dissenting votes, recognized some validity in the ELA as a state based primarily on its role in the United Nations. The U.S. had removed Puerto Rico from the list of its territories in the early 1950s, so it was not held accountable for its possessions, and to make it appear that Puerto Rico was a nation with a “certain” type of sovereignty — trying to purify Washington’s international image in order to deepen its anti-communist Cold War.

Minutes later on June 9, and a few steps from the Supreme Court, the House of Representatives approved the PROMESA project (Puerto Rico Oversight, Management, and Economic Stability Act), which must now be endorsed by the Senate.

The day before, President Barack Obama, who is also betting on the so-called “Promise,” had met with Puerto Rican legislators Nydia Velázquez, José Serrano, Luis Gutierrez and Resident Commissioner Pedro Pierluisi to let them know there was no “Plan B” regarding the proposed Fiscal Control Board by the Republicans. That is, the board would inevitably gain both Republican and Democratic endorsement.

What the independence movement has always maintained has now been publically and officially confirmed: The Free Associated State is neither a “state” nor is it “free,” and it is not even “associated.” And to prove it, plunging the dagger into the depths of the Puerto Rican heart, Congress approved just hours later the dictatorial junta.

A prior article, “Imperialist Control Board to be imposed on Puerto Rico,” explained just what this junta is, but Puerto Rican patriot Rafael Cancel Miranda’s words describe it even more succinctly: “The Fiscal Control Board [JCF] is blatant slavery.”

We wrote in that article: “Among its points the following stand out. The FCB would be composed of seven members appointed by the U.S. president and chosen by the leaders of the House and the Senate, plus one nonvoting, ex-officio member appointed by the governor of Puerto Rico.

“Their powers — we have to remember that they are directed to pay the bondholders — would be overarching and autonomous, without being accountable to the Puerto Rican people or governed by its laws.

“The FCB must approve and certify all measures, regulations, budgets, loans, restructuring, in effect, all actions by the government of Puerto Rico and any of its instruments.

“[The junta will] determine and enforce the budget, over and above any budget approved by the island government. [It] will have the power to investigate and/or sanction anyone. [It] will institute automatic hiring freezes and require approval of contracts in excess of $100,000. …

“All debt related cases will be heard in federal court. … Any plan of debt restructuring must be consistent with its financial plan, for the ‘best interest of creditors.’ [The JCF] will reduce the minimum wage of workers under 25 years old from $7.25 to $4.25.”

What are the consequences of these developments?

Since the U.S. Congress imposed the ELA, it has furiously maintained the big lie that the government of PR has autonomy and that there is a “pact” between the governments of the U.S. and PR as if they were equals.

This big lie was actively supported by the empire and its local island representatives covering all areas in order to create and maintain a culture of subordination where the Puerto Rican people could only conceive of themselves as being bound to and “protected” by their U.S. masters.

Since the U.S. invasion of the island in 1898, Puerto Rico’s independence fighters have been persecuted, maligned, repressed and even murdered. The ideal of independence and sovereignty has been made to appear the equivalent of a great misfortune. In Puerto Rican households — and this writer includes herself in this sad story of families — there was no mercy for those who proclaim that ideal, unless he or she was lucky enough to be in a family that held those ideals, too. This history of the independence movement is long, and includes forced exiles.

Now, after the recent decisions, a new stage of struggle in Borikén has opened. The colonial option is no longer possible. Many people mention that now there are only two options: “statehood” or “independence.” But the reality is that statehood is really no option, and according to Rafael Cancel Miranda, this would mean the total subjugation of the colony.

But how can Puerto Ricans take the road of independence when so much effort has been put into colonializing the Boricuan mind? At this point we must remember the words of historic independence leader Don Pedro Albizu Campos: “What’s on the table is the ultimate definition: We are either Yankees or Puerto Ricans.”

There is today in Puerto Rico a revival of the progressive and the independence movement, including organization of various forms of struggle and civil disobedience against the junta, incorporating demonstrations, forums and work in the Decolonization Committee of the United Nations that will take up the matter this summer, and others.

From the Diaspora, where we are more than 5 million Puerto Ricans, I add the following reflections:

The struggle cannot be limited to a reaction against the junta; it must necessarily be a struggle for independence. For this we will need a broad educational campaign like that during the People’s Strike (against the privatization of the telephone company) in 1998. We need to go to every corner where there is a Boricua to explain the need for and the real possibility of independence.

Although the United Nations is important, remember that it has served, through the imposition of the Security Council, as an instrument of imperialist war and not peace.

The Puerto Rican struggle is taking place in a time of capitalist decay and right now, when the right wing wants to retake areas liberated by struggling peoples in Latin America, PR is part of those peoples and nations struggling worldwide, including the people of the United States. We must make the struggle for independence a common meeting ground for all struggles on an international level.

It is not a time for reform and halfway measures. We must go on the offensive. Remember the words of Che, “Don’t give imperialism an inch.” We should not ask or beg the U.S. Congress or renegotiate a debt that the people did not make and that is illegitimate.

What we should do is demand reparations for damages that the U.S. has caused the Puerto Rican people, the list of which is too long to reproduce here. And it is far more than the $70 billion debt they all talk about.

Above all, we must expose the criminal role of U.S. imperialism in Puerto Rico in all possible forums.

No to the imperialist debt and fiscal control! Independence now!

Joubert-Ceci is a retired physician born and raised in Puerto Rico who has resided in the U.S. since the mid-80s. She was part of the team of doctors who examined Lolita Lebrón, Rafael Cancel Miranda and Irving Flores y Oscar Collazo upon their return to Puerto Rico after their sentences were commuted in 1979. A warm, lasting relationship was then established between Joubert and Lebrón, who used to call her “mi doctorcita.”