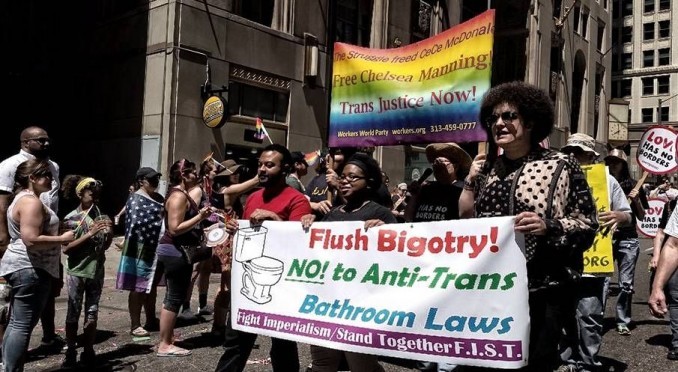 The Motor City Pride Fest took place in downtown Detroit on June 11-12. The annual event is Michigan’s largest LGBTQ Pride gathering, featuring booths, tables, food, entertainment and the Sunday Pride parade, which kicked off at noon on the 12th.

Many of those gathering on the parade route had not yet heard of the mass shootings at the Pulse nightclub in Orlando, Fla. News of the anti-LGBTQ character of the massacre continued to come in throughout the day.

Thousands participated in the parade, with many of the contingents sponsored by corporations such as the Ford Motor Co. and Bank of America. Some unions were represented, including UNITE HERE and the American Federation of Teachers. Other groups and organizations in the LGBTQ community, including community allies, took part.

Those lining the parade route cheered as the contingent from the Moratorium Now! Coalition, Workers World Party and FIST (Fight Imperialism, Stand Together) marched past, militantly chanting, “No justice! No peace! No bathroom police!” and other slogans demanding the abolishment of “bathroom laws” targeting transgender people from North Carolina to Michigan.

There was steady traffic at the booth shared by Moratorium Now!, WWP and FIST, according to activists with these organizations, with many people expressing an interest in socialism. More than 100 people signed letters to the Michigan Department of Corrections to demand an end to the rape and sexual abuse of LGBTQ prisoners at the Cotton Correctional Facility in Jackson, Mich.

On Sunday evening, hundreds attended a vigil in Ferndale, Mich., to mourn those who died in Orlando.