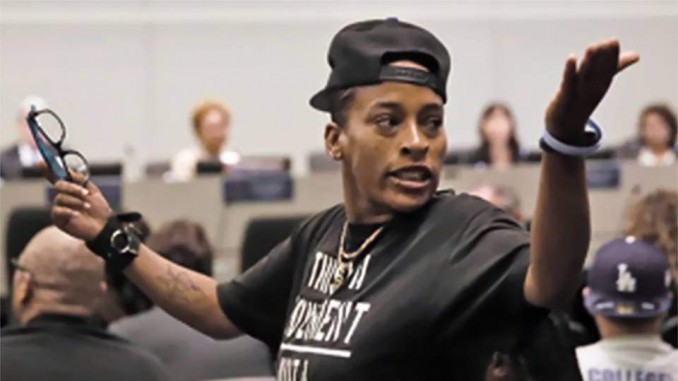 Bulletin: On June 7, Superior Court Judge Elaine Lu sentenced Jasmine Richards to 90 days in jail, despite a letter sent to the court from Juror #6, a white male, pleading for leniency. It included the following: “The true injustice and political misstep was the decision to prosecute to the furthest extent of the law…. I ask you please honor this request to deliver the minimum possible sentence for Ms. Richards.”

The spirit of California’s anti-lynching law has been turned on its head in a case targeting a young anti-racist organizer. Outrage is spreading over last week’s conviction of Jasmine Richards, also known as Jasmine Abdullah, the founder of the Pasadena chapter of Black Lives Matter. The charge is so-called “felony lynching,” which is the attempt to take a person out of police custody by force.

Richards has been kept in custody and faces a possible sentence of one year in state prison.

Richards was referred to as “the first political prisoner of Black Lives Matter” by New York Daily News columnist Shaun King in his June 2 column. BLM called for supporters to attend court when Richards will be sentenced on June 7 at 8:30 a.m. at the Pasadena Courthouse, 300 E. Walnut St.

Richards was arrested in August 2015 by Pasadena police on the “lynching” charge and two lesser charges. Her arrest came a few days after a demonstration calling for justice for Kendrec McDade, an African-American teenager shot to death by two Pasadena cops who claimed they thought he had a weapon. While McDade was in fact unarmed, both cops were cleared of wrongdoing.

Richards had made the McDade case an organizing priority. She was singled out by police at one of the BLM’s rallies protesting the killing of McDade. The cops claim that on Aug. 29, as Richards led a march past a restaurant, protesters removed someone from their custody whom they were arresting on a matter unrelated to the protest. No one was arrested at that time. It was only on Sept. 2 they arrested Richards and charged her with “felony lynching.”

Richards was arrested for supposedly violating a law that — like anti-lynching statutes in many other states — was enacted after decades of campaigning by the likes of Ida B. Wells, many African-American women in the Anti-Lynching Crusaders grouping of the NAACP, and many other progressives who fought for a federal anti-lynching law. No records were kept before 1882, but at least 3,500 African Americans were murdered from 1882 to 1968, according to records compiled by the Tuskegee Institute. Lynchings were likely to have been at least as frequent earlier, especially after Reconstruction ended.

Racist mobs murdered Black people with impunity, hanging them, burning them alive and shooting them. Many attempts at a federal anti-lynching law were defeated, but pressure and publicity finally began to force many states, counties and cities to enact some form of anti-lynching law. Even after many of the laws were in place, lynchings occurred with alarming frequency. Yet in all the years since anti-lynching laws have existed, only one white person has been convicted of first-degree murder.

The prosecution of Richards was dishonest and should have fallen apart. The anti-lynching law is supposed to be applied when a “riot” occurs or when a group removes someone from police custody by physical force. During the years when so many lynchings happened, there were numerous deadly riots of white mobs attacking African Americans. Just as often, cops willingly turned over African Americans to murderous mobs.

Richards was represented by longtime civil rights attorney Nana Gyamfi, who pointed out that the person the cops claimed was removed from their custody was never even handcuffed, and there was no “riot” at all.

The so-called justice system belongs to those who have much to fear from a strong anti-racist movement, and this conviction is a reminder of that.

Jasmine Richards, a courageous woman, a skilled and determined young organizer, is the first African American to ever be convicted of so-called “felony lynching.” Black Lives Matter organizers are calling on supporters to pack the courtroom and are pushing for an outcome that will mean no more jail time.

Every progressive should check out BLM online to figure out how they can help in this important case. We need to unite to turn back attempts by the cops and courts to criminalize anti-racist activists. Free Jasmine Richards! Black Lives Matter!