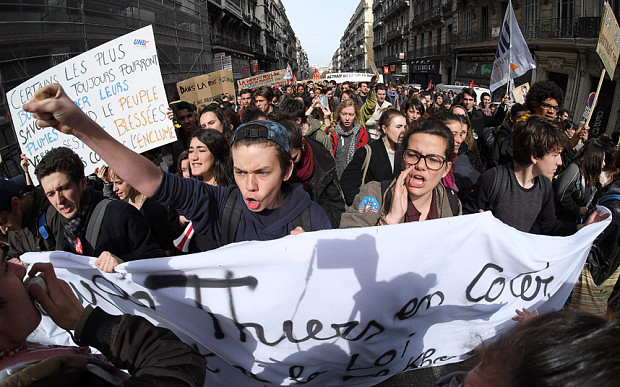 Hundreds of thousands of French workers, youth and students have come out into the streets of France nine times since the middle of March to protest a “labor reform law,” which is so unpopular with the workers that the government had to push it through Parliament’s National Assembly without a vote.

A single national day of protest on June 14 has been called by the General Confederation of Labor (CGT) and the coalition of labor unions it leads. On that day, the French Senate will take up the bill. Nuits Debout (“Up All Night”), a group of mostly youth and students outside the labor movement, has also endorsed this action.

Workers worldwide, including in the United States, inspired by the determination of the French workers, have called solidarity actions for June 14.

Besides the protests, a number of French workers went on strike in May, and some are still out. Railroad workers have been off the job since the middle of May. Even though Prime Minister Manuel Valls and Guillaume Pepy, the head of the SNCF, the corporation in charge of the railroads, tried to use the recent floods afflicting Paris to shame the SNCF workers into returning, the unions stayed strong and are still on strike.

FranceTV.info on June 3 said that most of the street cleaners and sanitation workers in Paris remain on strike. There are continuing reports of blockades at sorting centers outside the Paris-metropolitan area. Air traffic controllers and Air France pilots are “creating grave problems for the French economy,” stated French President François Hollande — that is, problems for the French ruling class.

Refineries are still shut and tankers remain unloaded, so many  French gas stations are running dry. Workers at most nuclear power plants, which supply 80 percent of the country’s electricity, are also on strike, forcing the electricity distribution company to import power at a very high cost.

France’s misnamed Socialist Party, which runs the government, has not only been directing French imperialist interests, but has abandoned any pretense of “being for the workers.” It is competing with the Republicans (LR) and the National Front (FN) for the title of the most effective proponent of austerity for the working class.

Even though austerity programs have been common in developed North American and European economies, the public’s response to them has usually been limited to the ballot box, which has provided effective resistance. Greece has provided the strongest example of how the workers have been unable to solve their problems by relying on the ballot.

The Party of the Left, under Jean-Luc Melenchon, and the French Communist party, which just finished its 37th congress, are orienting to France’s 2017 presidential elections. But the workers are in the streets and on picket lines in an all-out attempt to defeat the so-called Socialist Party’s attempt to impose austerity through “labor reform.”

International solidarity with the months-long struggle of the French workers has been building. Several sections of the World Federation of Trade Unions have released statements in solidarity with the French workers. A statement issued May 23 said: “The WFTU expresses its indignation against the forced evacuation of oil storage facilities and its full solidarity with all workers in France, who are fighting against the ‘labor’ law of the Social-Democratic government of François Hollande.” (wftucentral.org)

United Steel Workers Local 8751, which represents the Boston school bus drivers, released a statement April 28: “We send our warmest internationalist greetings to the rising working class of France. We hail the upsurge of public and private sector unions, of unemployed, pensioners, students and immigrants, and of everyone under siege by the capitalist exploiters.” A majority of members of this local are originally from Haiti.

An ad hoc coalition in the United States is using social media to organize coordinated protests at French consulates on June 14, the date of the next national protest in Paris. Some initiators of this campaign, members of the Free Mumia Abu-Jamal Coalition, were in France on May 1 to celebrate with the CGT the 10th anniversary of the naming of a street, “Rue Mumia,” in St. Denis, a suburb of Paris.

When the Free Mumia Coalition members marched with the CGT in the May Day protest in Paris, their contingent was attacked by the cops with tear gas and stun grenades.

The U.S. coalition statement starts: “We, the undersigned, express our support for the ongoing mobilization of France’s workers in a coalition led by the General Confederation of Labor (CGT), and of the Nuit Debout movement consisting primarily of youth and students, against austerity attacks contained in that country’s so-called Labor Reform Law.

“This law, which was pushed through by the government and corporate vultures, will only serve to drive down the standard of living for current and future generations. The multinational French working class is using many forms of strikes, occupations and street protest, all of which illustrate who has the real power in society.”

The statement concludes: “We call on United States and other countries’ unions and other workers’ organizations, community groups and youth groups to exchange information with the French CGT and student leaders via satellite, radio, and written interviews with reliable translators. We further urge everyone to support the June 14 general strike in France via resolutions, educational meetings, and rallies at the nearest French consulate.” (June 6 email)

In New York City, supporters of the French workers will gather near the French Consulate at 934 5th Ave. on June 14 from 4 to 6 p.m. to show solidarity. For more information: wp.me/p2T59r-1p8