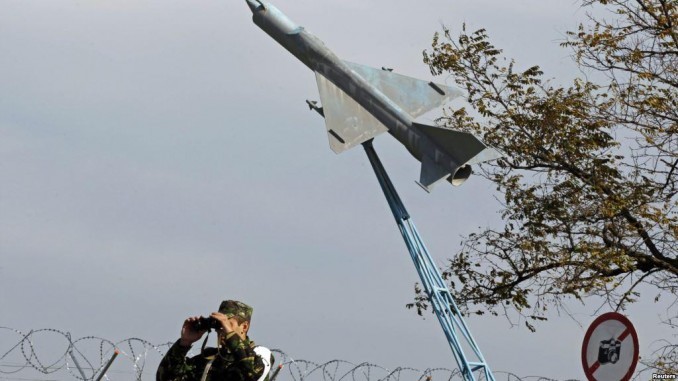 A military policeman looks through binoculars before the official groundbreaking ceremony of the site for the U.S. Aegis Ashore missile-defense facility, located in a former airbase at Deveselu, Romania.

At a ribbon cutting ceremony at the airbase of Deveselu in Romania, NATO Secretary General Jens Stoltenberg inaugurated the “Aegis Ashore” land-based installation of the U.S. Aegis missile system.

Stoltenberg thanked the United States, because this installation greatly increases its ability to “defend European allies against ballistic missiles outside the Euro-Atlantic area.” He announced the start of work to establish another “Aegis Ashore” in Poland, similar to the one in operation in Romania. This one will also be equipped with Lockheed Martin’s SM-3 interceptor missiles and MK 41 vertical launchers.

The two land-based installations are added to four Aegis ships (also equipped with SM-3 missiles and vertical launchers) which — sent out by the U.S. Navy from the Spanish base of Rota — cross the Mediterranean, Black Sea and Baltic Sea, while linked to a powerful radar system in Turkey and a command center in Germany.

NATO’s secretary general, on the one hand, says that “our missile defense program is a long-term investment against a long-term threat.” On the other hand, he ensures us that “this site in Romania, just as the one in Poland, is not directed against Russia.”

The function of the so-called “Scud” anti-missiles is actually offensive. If the U.S. were able to implement a reliable system capable of intercepting ballistic missiles, it could keep Russia under the threat of a nuclear first strike, relying on the ability of the “Scuds” (shields) to neutralize the effects of retaliation.

In reality, this is not possible at the present stage, because Russia and also China can take various countermeasures, which makes it impossible to intercept all nuclear warheads.

For what then is the Aegis system, which the U.S. is enhancing, being deployed in Europe? Look to Lockheed Martin itself for the explanation. Illustrating the technical features of the MK 41 vertical launch system — the one installed on Aegis missile ships and now even at the land base of Deveselu — the company stresses that it is capable of launching “missiles for every mission: anti-air, anti-ship, anti-submarine and to attack ground targets.” Each launch tube is adaptable to any missile, both to interceptors and to those for a nuclear attack.

Thus, no one can know which missiles are really deployed in vertical launchers at Deveselu or those on board vessels sailing in the Russian territorial waters. Unable to inspect them, Moscow must assume missiles are present that enable a nuclear attack.

Europe thus returns to a climate of Cold War, to the benefit of the U.S., which can thus increase its influence on its European allies.

In the meeting with the leaders of Sweden, Denmark, Finland, Iceland and Norway on May 13 in Washington, President Barack Obama denounced “the growing presence and aggressive military posture of Russia in the Baltic-North Sea region” as he reaffirmed the U.S. commitment to “Europe’s collective defense.”

At the same meeting, Obama highlighted the European consensus to maintain sanctions against Russia, praising in particular Denmark, Finland and Sweden, who, “as members of the EU, strongly support the TTIP [the Transatlantic Trade and Investment Partnership], a treaty that I reaffirm that I want to conclude before the end of year.” We see that Lockheed’s vertical launchers can also contain the TTIP missile.

This article was published in Il Manifesto on May 15. Translation by WW managing editor John Catalinotto