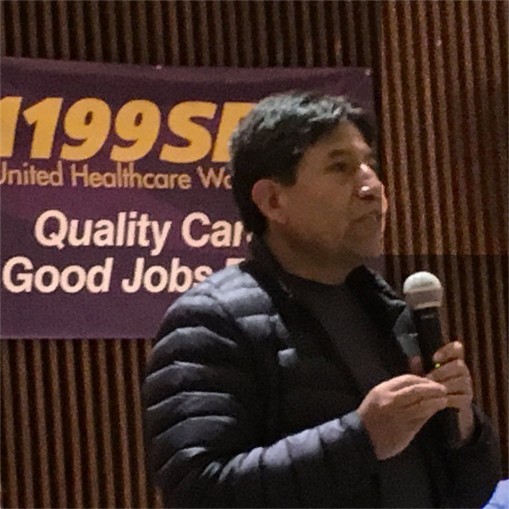 The solidarity movement in New York City was privileged to hear David Choquehuanca, the foreign minister of Bolivia, on May 12. He spoke specifically about Bolivia’s “Live Well” Campaign.

The event, described as a “Conversation with the Foreign Minister,” was held at the SEIU Local 1199 Hall in Manhattan. It was organized by the Alberto Lovera Bolivarian Circle and endorsed by a number of groups, including the International Action Center.

As the event ended and participants gathered to leave, there seemed to be unanimous agreement that Comrade Choquehuanca’s words were so powerful they left the crowd speechless. All felt his message was riveting and deserved attention and study.

Choquehuanca began by stating that the world today is in deep crisis and chaos. Throughout the evening he used the comparison of the two flags of Bolivia as symbols of two different things, but together they are symbols of unity, integration, family and solidarity — all concepts the troubled world must strive for.

An Aymara Indian, Choquehuanca has been an adviser to President Evo Morales, who is also Aymara, for many years. When Evo was elected president of Bolivia in December 2005, history was made.

Morales, a declared socialist, was the first Indigenous president of Bolivia. Progressive and revolutionary changes were part of Evo’s platform, which today includes raises of the minimum wage as well as increased pensions for the elderly.

But most important was the pride Bolivia’s Indigenous people felt in having one of their own as president. A clear symbol that an Indigenous person was now president was making the pan-Indigenous flag of Bolivia, the wiphala, also the national flag of the country.

Two flags are now flown in Bolivia, which prove the struggle of Native peoples has moved to center stage. It is a source of pride for Native people not only in Bolivia but around the world.

Since then, Bolivia’s social and political movement has been in the forefront of revolutionary struggle against poverty and exploitation. Most notably, Bolivia has been on the front lines of the climate change issue, demanding that those who are most responsible for polluting the planet take full responsibility.

Brother Choquehuanca, a spokesperson for the “Live Well” campaign, used the solidarity event to challenge the movement philosophically and ideology.

He said that the problems the world faces, including poverty, food and the energy crisis, have led to world indignation. He pointed out how Native peoples throughout the continent and in the global South may be a source of knowledge and experience in order to return to harmony.

Choquehuanca urged activists and freedom fighters to struggle to “live well” — not only as a society but as individuals. He stressed that being healthy physically and psychologically is so vital to the survival of humanity.

In Bolivia people have begun to recapture their culture and their self-esteem. “We have to return to our culture to live well.”

Choquehuanca stated that the rainbow is sacred for Indigenous people and represents unity, no borders; it belongs not just to one people, but everyone. Whether you are from Palestine, Venezuela or Syria, we need to “dialogue and work together,” he said.

Choquehuanca ended by stating that “rainbow guerrillas,” which is what Evo is, are important in order to reject capitalism and construct socialism in the world.