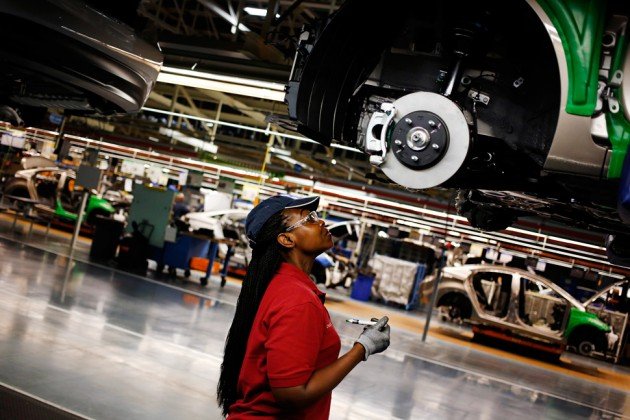 The question of what has happened to jobs in the United States is of course of the utmost concern to millions of workers here. It has been proven in study after study that the percentage of decent-paying jobs has been steadily declining for a long time. And when — not if — the financial markets go through another crisis, the pressure on jobs and wages is sure to grow even more acute.

This fact is so broadly acknowledged that high-profile candidates in this year’s presidential election have focused on it, knowing what they have to say will appeal to many voters. The Trump and Sanders campaigns are of course very different in their approach to this question — Trump stirring up chauvinism and hatred of “foreigners” whom he blames for the loss of jobs, Sanders calling for making it harder for corporations to move their manufacturing and assembly operations offshore.

Both, however, ignore the real reason behind the decline in jobs. A recent report verifies that manufacturing jobs are not just being moved to lower-wage countries, they are actually “disappearing.” And it’s not only in the developed imperialist countries.

In an April 26 New York Times article titled “The Mirage of a Return to Manufacturing Greatness,” Eduardo Porter writes that mechanization of agriculture has eliminated millions of farm workers’ jobs here. He adds, “In America’s factories, jobs are inevitably disappearing, too. But despite the political rhetoric, the problem is not mainly globalization. Manufacturing jobs are on the decline in factories around the world.

“‘The observation is uncontroversial,’ said Joseph Stiglitz, the Nobel-winning economist at Columbia University. ‘Global employment in manufacturing is going down because productivity increases are exceeding increases in demand for manufactured products by a significant amount.’ …

“No matter how high the tariffs Mr. Trump wants to raise to encircle the American economy, he will not be able to produce a manufacturing renaissance at home. Neither would changing tax rules to limit corporate flight from the United States, as Mrs. Clinton proposes. …

“Over the course of the 20th century, farm employment in the United States dropped to 2 percent of the work force from 41 percent, even as output soared. Since 1950, manufacturing’s share has shrunk to 8.5 percent of nonfarm jobs, from 24 percent. It still has a ways to go.

“The shrinking of manufacturing employment is global. In other words, strategies to restore manufacturing jobs in one country will amount to destroying them in another, in a worldwide zero-sum game.

“The loss of such jobs has created plenty of problems in the United States. For the countless workers living in less developed reaches of the world, though, it adds up to a potential disaster.”

The elephant in the room that none of the establishment political parties address is that capitalism has entered a stage when technology has become so advanced that human labor is being reduced to a minimum in many areas of the economy, from agriculture to mining to the manufacture and assembly of millions of different commodities — and even to providing services.

Just a few decades ago, the changes in the economy were hailed by bourgeois pundits as supposedly ushering in a new prosperity, in which blue-collar workers would be retrained to provide service jobs that machines couldn’t handle. The promise was that everyone would become “middle class” — that is, relatively prosperous and able to find work in less dangerous, dirty and tedious jobs.

How quickly things change! Today, the lament is that this supposed “middle class” — in reality, the workers who earn a wage adequate to raise a family — is disappearing.

What has changed is not at all difficult to understand if we apply Marxism to the task. In fact, a number of books have been written on the subject, beginning back in 1986 with the publication of “High Tech, Low Pay” by Workers World founding chairperson Sam Marcy and continuing with “Low-Wage Capitalism” in 2008 and “Capitalism at a Dead End” in 2012, both by WW contributing editor Fred Goldstein. All three books apply a Marxist, class-struggle approach to understanding what is happening and how to fight in the interests of the working class. (See workers.org.)

Written at a time when the euphoria and promises of a better life for all through computer-driven technological change still permeated bourgeois economics, Marcy’s book showed that the opposite was happening in the United States — that the introduction of high technology in many industries was already, even in the 1980s, pulling down wages and de-skilling much of the workforce.

Goldstein’s books deal with what is now so apparent — the globalization of the production and distribution of commodities. That has brought hundreds of millions of workers into competition in a worldwide labor market just as the number of available jobs is shrinking.

What drives this new stage of capitalism is what has always driven capitalist innovation: the competition for profits. With the new technologies available, the biggest capitalist monopolies that have the means to introduce labor-saving devices on a massive scale — robots, computer-driven assembly lines, GPS tracking devices, etc. — can undercut their competitors by shedding labor.

In Marxist terms, this means a greater investment in constant capital, i.e., plants, equipment, raw products — and a smaller investment in variable capital, i.e., wages. Wages are “variable” depending on the class struggle, or how much the bosses can squeeze out of the workers. But wages cannot fall below the actual cost of reproducing the workers themselves — or the workers will either die or rebel. And, as Marxism shows, it is from human labor that the capitalists extract their profits.

The rise of modern capitalism has seen a huge shift in the composition of capital, that is, the percentage of constant or dead capital (equipment, materials, plants, etc.) versus variable, or living, capital (wages). More than a century ago, the amount of capital needed to set up a factory or other business was not so great in relation to the amount spent on workers’ wages. In other words, it didn’t take a lot of capital to go into business, and once the company was up and running it earned more than enough to pay  wages.

Today, however, it takes a hell of a lot of money to start up most businesses. Let’s look at one such business for a minute, for it tells us a lot about how capitalism functions today.

Just a decade ago, a teenage undocumented immigrant from Mexico named Jordi Muñoz made it to San Diego, Calif. Muñoz is a computer genius, a self-styled nerd who was able, practically on his own with very little formal schooling, to invent a workable drone. He picked up much of his knowledge by going online and discussing with the “open source” community how to program various things.

Muñoz didn’t have any money, but his technical expertise was so impressive that he got financial backing to start producing drones and set up a company called 3D Robotics. Eventually, rich people invested more than $100 million in his company, and today it is manufacturing nonmilitary drones in the U.S. and Mexico. Muñoz, of course, must feel very happy that his incredible talent has helped produce jobs for his fellow Mexicans.

But here’s the kicker to this “success story.” This company, now valued at more than $3 billion, has created jobs for about 60 people in Mexico and 90 in the U.S.

Sixty Mexican jobs! Compare that to the many millions of Mexicans in farm families who have been uprooted because they couldn’t compete with low-cost, mechanized U.S. agriculture, which has flooded their country since the NAFTA trade agreement went into effect in 1994.

Next: Why exploiting fewer workers leads to a declining rate of profit. There’s only one way out, but it’s not popular on Wall Street.