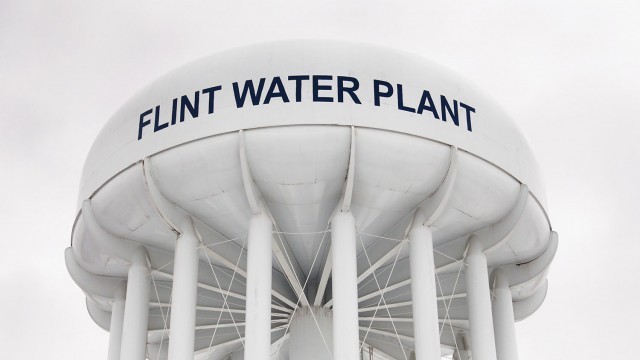 Michigan Attorney General Bill Schuette announced on April 20 that criminal charges had been brought against three individuals in relation to the Flint water crisis. Two are mid-level functionaries of the Michigan Department of Environmental Quality. The third is former Flint Utilities administrator Mike Glasgow.

Flint residents are puzzled by the charging of Glasgow, who actually tried to discourage the state from approving the toxic decision to draw water from the polluted Flint River. He warned the MDEQ in the summer of 2015 that some Flint homes had high lead levels in their water. Yet he faces one felony and one misdemeanor count for tampering with evidence and willful neglect of duty.

Without hinting at any names, Schuette indicated that additional individuals would be charged. One might hope that the investigation into the lead poisoning of Flint would start at the top and work its way down. Yet Gov. Rick Snyder, who is now the subject of a recall petition, has not even been interviewed. Will any of his appointees — from the top MDEQ officials who repeatedly claimed the water was safe to drink, to the three successive emergency managers under whom Flint residents were delivered poison water — face justice?

Schuette, a Tea Party Republican, spent more funds and time trying to keep same-sex marriage illegal in Michigan than he has devoted thus far to assessing guilt in the crimes against Flint.

Snyder’s latest blunder is a publicity stunt gone bad. He pledged that he and his wife would drink Flint water at home and at work for a month. This was filtered water from Detroit, not the untreated, unfiltered water that residents were told for 18 months was safe. Within a few days of declaring his penance, the governor announced plans to travel abroad — with no Flint water in his luggage.

Meanwhile, the people of Flint continue to face obstacles, delays and denials when it comes to getting the massive state and federal aid needed to repair the water infrastructure and confront the health crisis caused by lead and other toxins. Even the governor’s hand-picked Flint task force says the delivery of funds needs to be accelerated.

Keep Veolia out of Flint!

Veolia, the infamous French transnational company engaged in everything from union-busting to protecting polluters to expropriating public water, was paid $40,000 a year ago by the city of Flint to conduct a water quality study. This exorbitant fee was approved by the Snyder-appointed emergency manager. What the city got from Veolia was an 11-page report that said the water was safe to drink.

On April 21, a demonstration was held by the Flint Democracy Defense League; Water You Fighting For; Flint Rising; the Flint AFL-CIO; the American Federation of State, County and Municipal Employees Council 25; and the Plumbers union outside the city’s water treatment plant, where a “pre-proposal meeting” was being held to consider bids from the private water industry to take over Flint water. “Keep Veolia out” and “No privatization” were among the demands.

A news release stated: “Representatives from Veolia may attend the pre-proposal meeting, despite the fact that the corporation is currently being sued for professional negligence. Veolia failed to sound the alarm for lead contamination during its evaluation of the city’s water system, leaving residents exposed to it for months.”

Flint has joined the growing worldwide movement to shut down Veolia’s attacks on unions, public transportation, water resources and the environment.

Another lie — and a new alliance for justice

The same governmental bodies that said the smelly, brown-colored, foul-tasting water was safe to drink are now saying it is safe to shower and bathe in. Just as before, they are ignoring Flint residents’ complaints of breathing trouble, skin rashes and hair falling out after showering. The water quality, they say, meets government standards. The catch is that no state or federal standards exist for wash water. Yet experts know that some toxins can be inhaled in steam or mist and absorbed through the skin.

In the face of continued government inaction, the environmental group Water Defense has stepped in to defend Flint residents. The organization, founded by actor Mark Ruffalo, has sent scientist Scott Smith to test shower water for toxins. Water Defense is committed to scientifically ascertaining what chemicals are making the simple act of bathing so intolerable. Smith believes that any number of byproducts created when disinfectants added to water interact with organic matter could be the cause.

The goal is for Flint to become a pilot for a national standard for water quality that goes beyond drinking water. Flint has another ally: the United Alliance of Plumbers, Pipefitters, Sprinklerfitters and Service Technicians (UA). Harold Harrington, a master plumber and Flint resident, represented UA on April 22 at a joint press conference with Scott Smith, Melissa Mays of Water You Fighting For and Flint City Council member Eric Mays.

For months, hundreds of union plumbers have been volunteering their time, helping Flint residents install water filters and retrofitting their faucets when the filters would not fit. Now, in partnership with Water Defense, all 343,000 UA members across the country will be trained by the union in “the best available water testing technology which enables us to better protect the communities we serve” and “detect problems before they become irreversible,” said UA General Secretary Mark McManus.

Thus, while state and federal governments drag their feet in sending needed assistance to Flint, the solidarity of labor, community and environmental movements is bringing justice.