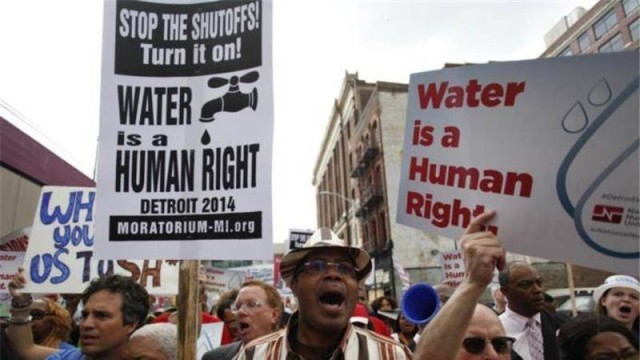 While the business media call it “revitalization,” the actual program of dislocation and underdevelopment aimed at long-time residents of Detroit is slated to embark on a new round of massive water shutoffs.

Many scheduled to be terminated may not be aware of the imminent crisis they are facing. An April 15 report from Michigan Public Radio indicated that the Detroit Water and Sewerage Department is no longer placing notices on the doors of homes in arrears on their bills.

The water department says that customers should look for termination notices on their bills, either sent out in the mail or posted online. This represents a departure from years past when the DWSD would send “collectors” to households to inform them that their water would be shut off in five days unless arrangements to pay were made. Spokesman for DWSD Bryan Peckinpaugh said the department stopped using door tags as a budgetary matter.

A tale of two classes

While the newspapers are filled with stories of economic revival in Detroit, joblessness, poverty and homelessness remain.

In a revealing story on April 1, the Detroit News, considered a more conservative publication than the Free Press, pointed to the contrast between the treatment of largely working-class and poor households that routinely lose their water services and the thousands of businesses that remain behind in their bills but are not shut off.

Journalist Joel Kurth wrote: “Detroit last year shut water service to 23,300 homes — the equivalent of every household in the city of Pontiac — but left the taps running at thousands of businesses that owe millions of dollars, city documents show. Businesses and government-owned properties owe nearly twice as much as residences, $41 million compared with $26 million for homes, but only 680 were shut off in 2015, according to records obtained by The Detroit News through the Freedom of Information Act.”

Over 10 percent of the city’s 200,000 residential accounts were shut off in 2015, whereas approximately 0.3 percent of the city’s 25,000 nonresidential accounts suffered the same fate. Since 2014, when the termination of services gained national and international attention due to protests outside the DWSD headquarters and the blocking of Homrich wrecking company facilities on the eastside, over 50,000 shutoffs have been carried out.

“City records claim the state owes more than $1 million — $648,000 for the Detroit Reentry Center prison and $473,000 for Belle Isle, which the state Department of Natural Resources has managed since 2014,” wrote Kurth. “Both are more than 60 days overdue and eligible for shutoffs, records show.”

The real targets of water shutoffs are the majority African-American, proletarian and impoverished residents of the city. Cutting off their water is tantamount to an “illegal lockout,” since it becomes almost impossible to live in a home or apartment without this essential service.

This has forced tens of thousands to leave Detroit, the largest majority African-American municipality in the U.S. In the last census period, 2000 to 2010, Detroit lost nearly 25 percent of its residents.

Detroit homes with minor children are subject to intervention by Child Protective Services if there’s no water, under the guise that the household is dangerous and unfit to live in.

During the largest municipal bankruptcy in U.S. history, Detroit was forced by mass action two years ago to declare a moratorium on water shutoffs for several months.

However, payment plans set up since then have failed to keep tens of thousands of households from shutoff status. Yet another plan was introduced in March through the Great Lakes Regional Water Authority, which ostensibly provides assistance to those in low-income households.

This plan allocates only $4 million to assist those unable to pay their bills, many of which are questionable and under dispute. In fact, the plan falls far short of the tens of millions in arrears. One factor rarely noted in this water crisis is the interest rate swaps on bonds associated with the DWSD which have drained at least $537 million from the system since 2012.

The problem of rising water rates and shutoffs is national in scope. Carrie Sloan, senior research analyst at the Refund America Project, places the blame where it should be — on Wall Street.

“Detroit water customers have seen their rates spike by nearly 120 percent in the last decade; almost half of their payments now go toward paying down the debt on the swap termination fees,” Sloan emphasized. “In a city where nearly 40 percent of residents live below the poverty line, it’s not surprising that many have fallen behind on their skyrocketing bills.” (The Nation, March 11)

Sloan also pointed out, “In 2008, when Wall Street crashed the economy, and the massive risks associated with these deals [toxic interest rate swaps] came to light, cities across the country found themselves owing banks millions of dollars.”

The billions needed to rebuild the declining infrastructure of the cities are being expropriated by some of the leading financial institutions, such as Chase Bank, UBS and Morgan Stanley.

These factors must take center stage in the struggle for the right of working people, the nationally oppressed and the poor to remain in the cities.