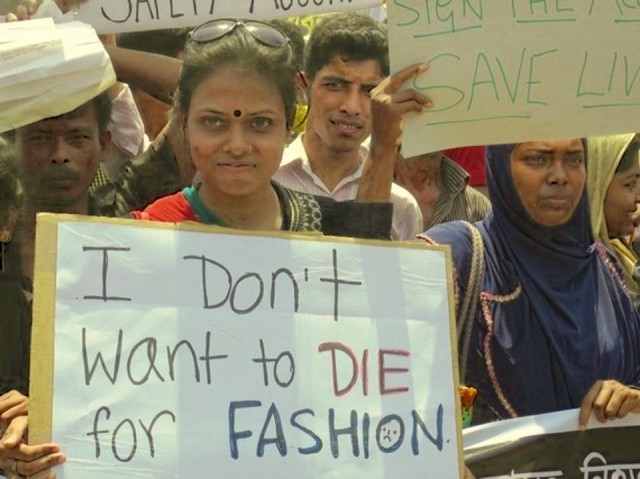 April 24 is a day of infamy for the global garment industry. On that day in 2013, the Rana Plaza complex in Dhaka, Bangladesh, housing five clothing factories, came crashing down.  At least 1,138 workers were killed and over 2,000 injured.

This year, thousands of textile workers and victims’ families protested at the site of the disaster on its anniversary.  They, together with union organizers, called on Bangladesh’s government to close all dangerous factories and put on trial all those responsible for the catastrophe.

Union leader Abul Hossain stressed: “Three years have passed and still we don’t see any justice.  No one has been held to account for one of history’s worst man-made disasters.” (NPR, April 24)

Alarmed workers had warned of massive cracks in the building’s façade but were threatened with losing wages and their jobs if they didn’t return to work.  Bangladeshi courts took two years to charge the building’s owner and 40 others with murder — but 16 are out on bail and 24 have absconded. No further steps towards justice are in sight.

Left off the hook altogether are the global retailers who make a fortune from selling garments produced in Bangladesh while paying low production costs. The country’s 4 million textile workers, mostly women, get starvation wages of $68 a month. Worldwide sales enhance the coffers of the biggest clothing brands.

This exploitation is inherent in capitalist globalization.  Corporations search the globe looking for areas where they can maximize profits by paying the lowest wages. In this race to the bottom, factory owners offer the cheapest production costs, deny workers’ rights, ignore their safety and repress unionization, all to meet transnational companies’ demands.

The Rana Plaza tragedy focused world attention on the exploitative, dangerous conditions under which Bangladeshi garment workers toil.  It revealed the cruelty of capitalist globalization: Profits rule, and the lives of the workers, who create all the wealth, are expendable.

International outrage brought about demands for safety measures in the plants and compensation for victims and families. Inspections have found over 100,000 hazards and many unsafe plants, but owners are stalling on making repairs or even installing fire exits.

Financial compensation has been woefully inadequate for workers so disabled they cannot work again and for families of deceased workers. Paltry contributions from global companies don’t even make a dent in imperialist superprofits.

Moreover, despite making modest payouts and agreeing to a few safety measures in order to appear “ethical,” the global brands have not fundamentally changed how they function. They keep exploiting these workers and raking in megaprofits without missing a beat.

The European Union, the United States, Canada and the Bangladeshi government all claim they want to improve labor rights and factory safety, but have not agreed to any mandates. They uphold capitalist globalization, but just want to make it appear fairer.

Garment workers say factory conditions are still “dangerous, unsanitary and exploitative.”  Wages are delayed and so low they can’t cover daily meals.  Workdays are often 14 to 16 hours long, with workers coerced into toiling until 3 a.m. Six-day workweeks are usual.  Verbal, sexual and physical abuse is rampant.  Fighters for workers’ rights and unionization are harassed, beaten and fired.

Western brands and local bosses expect Bangladesh’s government to keep the workers in line, without union interference. Abuse of organizers goes on unpunished.  The murderers of union leader Aminal Islam are still at large, four years after his death.

But government officials, plant owners and global brands cannot stop the class struggle, nor can they stop workers from winning allies worldwide.  Bangladeshi garment workers keep fighting back.  They need activists in the U.S. and Europe to keep the pressure on global retailers — and they need international solidarity from all workers and progressive movements.

Isn’t it time for an international outcry against this “profits before people” system? Isn’t it time to hit hard at capitalist superexploitation of the workers and disregard for their lives?  Isn’t it time to work hard to get rid of capitalism?  Aren’t the lives of 1,138 workers enough of a reason?