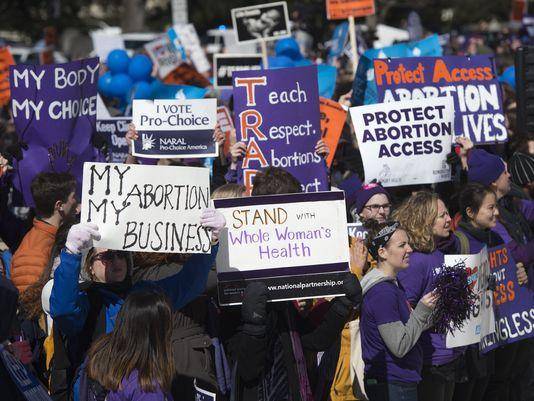 While several thousand pro-choice activists held a spirited, multinational, multigenerational rally outside the Supreme Court in Washington, D.C., on March 2, the first major abortion rights case in nearly 25 years was heard by the court.

The case, Whole Woman’s Health v. Hellerstedt, challenges two provisions in the 2013 Texas law HB2 that the state alleges are needed to protect women’s health. One is that abortion clinics must be ambulatory surgical centers (ASC), which meet stringent architectural standards, equipment regulations and procedural requirements. The other is that doctors performing abortions must have admitting privileges at hospitals up to 30 miles from where they work.

The main argument in the case is whether or not these provisions pose an “undue burden” on women’s access to abortion. The legal term “undue burden,” originating in the 19th century, is widely used in U.S. constitutional law. It was first applied in 1992 to women’s right to choose abortion in Planned Parenthood v. Casey. Justice Sandra Day O’Connor introduced the term to ensure that “the regulation does not ‘unduly burden‘ the fundamental right.”

Stephanie Toti, representing the clinics on behalf of the Center for Reproductive Rights, told the court that the Texas rules “are unnecessary health regulations that create substantial obstacles to abortion access.” She stated that partial implementation of the law had closed about half of the state’s more than 40 clinics and full implementation would reduce it to 10 or fewer in a state with over 5 million women of reproductive age. (Washington Post, March 2)

When Justice Samuel Alito noted there was little specific evidence about why the clinics had closed, Justice Elena Kagan pounced, calling it “an almost perfect controlled experiment. … It’s like you put the law into effect, 12 clinics closed. You take the law out of effect, they reopen.”

According to the Post, U.S. Solicitor General Donald B. Verrilli Jr., representing the Obama administration, stated that when most clinics in a state are closed that puts “extreme stress” on the remaining clinics and “exponentially increases the obstacles” on women seeking abortions. Verrilli added that the average number of abortions performed in Texas each year is 65,000 to 70,000, but ASC clinics are only able to perform 14,000.

Both Kagan and Justice Sandra Sotomayor noted that ASC are not required for liposuction and colonoscopies, procedures that carry much higher risks. Surgical abortions, among the safest procedures, have a complication rate of less than one-tenth of 1 percent. (New York Times, Feb. 28) They also have a very low death rate — just 0.6 percent per 100,000 procedures, according to a 2012 study. (RH Reality Check, March 3)

Justice Stephen G. Breyer questioned the admitting privileges requirement. He asked for evidence that a woman was turned away from a hospital because her doctor did not have credentials. After Texas Solicitor General Scott A. Keller admitted there was no such record, Breyer asserted: “What is the benefit to the woman of a procedure that is going to cure a problem of which there is not one single instance in the nation?” (Mother Jones, March 2)

When Justice Ruth Bader Ginsburg asked Keller how many women live more than 100 miles from the nearest clinic, he said 25 percent, not including women in the El Paso area who have access to a New Mexico clinic a mile over the Texas border. Ginsburg leaned in: “Send them off to New Mexico, where they don’t get either — no admitting privileges, no ASC. And that’s perfectly all right? Well, if that’s all right for the women in the El Paso area, why isn’t it right for the rest of the women in Texas?” Keller did not answer the question.

The case presented by the state of Texas was supported by briefs from anti-choice physicians and groups like Americans United for Life, the right-wing think tank that crafted the two provisions. The American College of Obstetricians and Gynecologists and the American Medical Association supported the clinics: “Laws that regulate abortion should be evidence-based and designed to improve women’s health. The challenged provisions in HB2 are neither.” (Post)

Outside the court, more than 2,000 pro-choice protesters drowned out about 200 anti-abortion adherents. Amy Hagstrom Miller, CEO of Whole Woman’s Heath, the lead plaintiff in the case, spoke: “We’re fighting a harsh, cruel law that does nothing to promote women’s health. Today we stood up for the woman from Lubbock who will drive over 250 miles one way to end her pregnancy. We stood up for the mom from Laredo who will look through her cabinets hoping to find something that will end her own pregnancy because she can’t afford the travel, the child care or the multiple days off work that have become part of getting an abortion in Texas.”

The Texas law has been a model for legislation in seven other states — Alabama, Kansas, Oklahoma, Louisiana, Mississippi, Tennessee and Wisconsin. If the court finds in favor of Texas, laws in those states could shut down dozens of women’s health clinics in the Midwest and South. And other states would be sure to follow.

However, the outcome of the case is not an anti-abortion slam dunk, due to the sudden death of Justice Antonin Scalia, who was vehemently opposed to abortion. All media reports focus on the role of Justice Anthony M. Kennedy, who often sides with the right-wing justices, but upheld Roe v. Wade in the 1992 Casey decision.

Four different scenarios are possible. First, the case could be sent back to the trial court to engage in additional fact finding to help the justices sort through the issues, which Kennedy suggested early in the hearing. Second, the court could vote to delay resolution of the case until a ninth justice is appointed.

Third, if the court vote is deadlocked at 4-4, the Fifth Circuit ruling affirming the Texas law stands — so clinics that aren’t ASC would have to close and admitting privileges would be needed. But the tie would not set a precedent, so the case could be reopened with nine justices on the bench. Fourth, if Kennedy votes with the progressive justices for a 5-3 decision, the Texas law is declared unconstitutional and all such laws are overturned.

What is certain is that this Supreme Court decision will exert a far-reachnig effect on the lives, families and futures of 61 million women in the United States of child-bearing age (15-44).

That such enormous power rests with just one unelected justice, appointed for life, exposes the totally undemocratic character of the Supreme Court. It must be abolished, along with the entire capitalist system, so that all women can freely make one of the most private, personal decisions of their lives.

The undemocratic Supreme Court will be the subject of a future article. Davis, a longtime reproductive justice activist, authored the pro-choice novel “Love Means Second Chances.” Kathy Durkin contributed to this article.