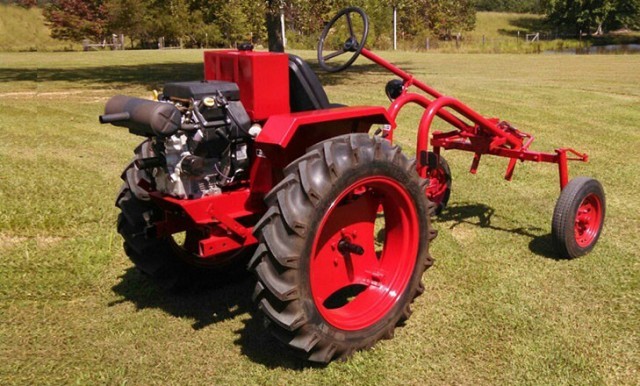 How could it be that, while hundreds of U.S. corporations are lined up at the starting gates, chomping at the bit to invest, export and unleash a flood of products into Cuba, a small company producing tractors in Paint Rock, Ala., has not only jumped to the front of the line but has sealed the first deal approved by Cuba and the U.S. Treasury Department? The key was simple: Present a product that Cuba needs and develop a trusting relationship.

The Cleber LLC company will now become the first U.S. manufacturer to open shop in Cuba since 1959, assembling small tractors at the new world-class port of Mariel outside Havana. The tractor is a modern, inexpensive version of a 1948 Allis-Chalmers model designed for 100-acre farms.

The model stopped being manufactured in 1955, as agribusiness was wiping out most small farms in the U.S. In Cuba, over 70 percent of the agricultural land is now leased by small private farmers and cooperatives on plots around that size. The tractor is designed to be easily repaired in the field and can also be converted into a backhoe, a forklift or an excavator. It will eventually be battery powered through solar panels. The name of the tractor being introduced to Cuba is “Oggun,” after the deity of iron in the ­Afro-Cuban religion of Santería.

The first thing that one of Cleber’s founders, Saul Berenthal, did was go to Cuba and spend considerable time not just talking to Cuban government officials but also meeting with contacts at the economics department of the University of Havana to get a sense of the ­Cuban view of the new period and what they need. Berenthal also studied the Cuban Foreign Investment Law of 2014. This law, which was discussed at all levels of Cuban society before it was implemented by the National Assembly, was considered a necessary adjustment to allow more foreign investment and how that investment was going to be processed, monitored and authorized. While opening some areas, the law also explicitly states that no foreign investment can be made in the areas of public health, education sectors or in any institution of the armed forces.

It is not as though Cleber is producing the Oggun without calculating a profitable return. But the difference here is that they are not applying Wall Street’s arrogant idea of what should be happening in Cuba right now — and that is the reason Cuba allowed their project to move forward.

The view of the bankers and corporate investors can be seen and heard in all corporate media outlets: Cuba should be opening up its markets. When Obama goes to Cuba in a few weeks, his main message will be to urge the Cubans to move faster in making all aspects of the Cuban economy accessible to U.S. businesses. But Cuba has set up its safeguards and they will control the pace of this new window of development.

It may be hard for the capitalists to understand that just because they have lots of products to sell does not automatically mean Cuba is interested. The country that has stood up to a hostile empire for over 55 years will make decisions as to who they do business with by a process that includes investment projects examined first by the Ministry of Foreign Trade, which relies on the Business Evaluation Commission, and then the ultimate decisions will be made by the Council of State.

The decision to accept or reject an investment proposal will be based on an evaluation not of how profitable it is, but on how much that proposal will contribute to the improvement of the standard of living of the Cuban people and the betterment of the social indexes of ­Cuban society which, despite the blockade, are some of the highest in the Western Hemisphere. In other words, ethical investments for the collective good versus investment dictated by profit.

Since the rapprochement between the two countries began on Dec. 17, 2014, the main thrust of the U.S. remains regime change, but through different, less confrontational methods. Their fantasy is that once the flow of capital begins to penetrate Cuba, there will be no stopping it.

There is no doubt that Cuba is now facing its biggest challenge, perhaps since the triumph of the revolution itself, but no one should underestimate Cuba and its commitment to its socialist model.

In the ongoing negotiations with the U.S., Cuba has insisted that it be treated with mutual respect and that its sovereignty is not on the table. Those who want to do business with Cuba should remember that, and the simple words of Saul Berenthal, the maker of the little red tractors from Alabama: “In the Cuban business culture, you always have to present the project, not only in economic terms, but what are the social benefits.”