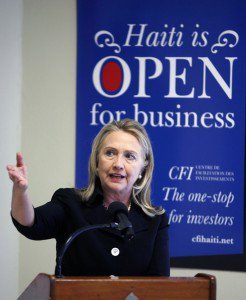 Seething mass protests throughout Haiti in late January and early February drove President Michel Martelly from office on Feb. 7. Martelly had been selected to run for president through the personal intervention of then Secretary of State Hillary Clinton in 2010.

Clinton had visited Port-au-Prince to personally overturn the decision of the Haitian electoral commission to select a different candidate — Jude Célestin — for a spot in the runoff.

In the context of the 100 years of direct U.S. intervention in Haiti, which most Haitians see as an occupation, for Washington to select a candidate is business as usual. But it throws light on the negative influence Bill Clinton and Hillary Clinton have had on Haiti.

Back in 1915, U.S. Marines moved the gold in the Haitian treasury to First National City Bank of New York, now Citibank, and soon after dissolved the Haitian Parliament. In 1919, they imposed a U.S.-written constitution on Haiti. They ran up the U.S. flag as the Marines fought a vicious war against an insurgency led by Charlemagne Peralte. The Marines didn’t leave until 1934, when Washington was short of money and the Marines had trained a military force — La Garde d’Haïti — to replace direct U.S. rule.

More recently, U.S. imperialism has supported a United Nations “peacekeeping” military force called Minustah to occupy Haiti. Because it dumped human waste from one of its bases into Haiti’s largest river, Minustah is responsible for bringing a devastating cholera epidemic to Haiti, which caused over 8,000 deaths and 800,000 illnesses. The presence of Minustah keeps the U.S.’s domination of Haiti intact.

For Secretary of State Clinton, choosing Martelly was an essential step in “Opening Haiti for Business,” one of her slogans. Martelly, a nightclub owner and performer with solid ties to the repressive, ruling-class grouping known as the Macoutes, would be much more open to deals than Célestin. Célestin’s forces were oriented toward trying to push the U.N. and the multitudinous nongovernmental organizations in Haiti into building up the country’s infrastructure rather than simply providing cheap labor to sweatshops.

Beginning in 2008, the State Department closely monitored Haitian efforts to raise the country’s legal minimum wage from $1.75 a day to $5.00 a day. When Hillary Clinton was appointed secretary of state in 2009, she maintained pressure on Haiti’s government to keep wages low for workers in the assembly plants and those sewing garments for U.S.-based clothing companies like Levi’s, Hanes and Fruit of the Loom. These low wages also enticed Sae-A Trading, a major South Korean sweatshop operator, to set up a new plant in Caracol in northeast Haiti, near the Dominican border.

Bill Clinton also played a prominent role in Haiti while Hillary Clinton was secretary of state. Appointed as the U.N.’s special envoy to Haiti in May of 2009 — before the January 2010 earthquake — he urged investors to make money in Haiti when he and Secretary-General Ban Ki-moon visited that year and also in a conference he called in New York.

After the earthquake, whose destruction of Haiti touched the hearts of the working people of the world and produced a nearly unprecedented flood of donations, Bill Clinton used his position to become co-chair of the Interim Haiti Recovery Commission. This role gave him a strong influence in how the $6 billion that flowed through this commission was disbursed. This made him responsible for the lack of real aid getting to the Haitian people.

At a protest on Jan. 12 in front of Bill Clinton’s office in Harlem on the sixth anniversary of the earthquake, the Committee to Mobilize against Dictatorship in Haiti said: “Bill Clinton, as head of the IHRC, Interim Haiti Recovery Commission, was responsible for the $6 billion that came into his hands. He had unlimited control of this money. Six years after the earthquake, not much has changed, and as a matter of fact, Haiti is in worse condition than it was in 2010. Only Bill Clinton can tell the world what happened with this money.”