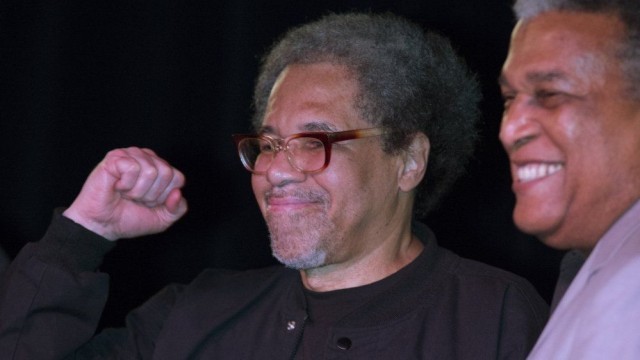 Feb. 22 — Shouts of jubilation, tears of joy and big hugs were the order of the day on Feb. 19 as Albert Woodfox, the last imprisoned member of the Angola 3, walked out of the West Feliciana Parish Jail in southern Louisiana.

On hand to give this unbreakable political prisoner a warm welcome were his brother, Michael Mabel, and other supporters. Woodfox raised a clenched fist and smiled. It was his 69th birthday, and what a present his release was!

Around the world, from Louisiana to London, from Brooklyn to the Bay Area, from Texas to Tanzania, social media buzzed, phone calls were made and emails were sent.  In essence, they all said, “Albert is free! After nearly 44 years in solitary, Albert is really finally free!”

Woodfox, Herman Wallace and Robert King were at Louisiana’s Angola Penitentiary, a former slave plantation, in the early 1970s, organizing against the horrific conditions there and trying to build racial unity. They had joined the Black Panther Party and formed a prison chapter.

After a prison guard was killed in an uprising in 1972, Woodfox and Wallace were charged with his death. Along with King, they were thrown into solitary confinement and became known as the Angola 3. Over the decades, they were forced to live in isolation and were denied basic rights.

Herman Wallace was released from prison in 2013 just a few days before dying from cancer. His huge funeral in New Orleans drew hundreds of family, friends and supporters from his neighborhood but also many other parts of the U.S. and some from Europe.

A showing of the recent film “The Black Panthers: Vanguard of the Revolution” had been planned at the Ashe Cultural Arts Center in New Orleans to honor Woodfox on his birthday. A panel discussion with former Panthers and Angola 3 supporters was to follow, and the organizers were going to mail Woodfox the pictures. Instead, he and his brother walked into the hall.

“You’d have thought that Beyonce had entered,” said Parnell Herbert, an activist, a playwright and a childhood friend of Woodfox. “People were cheering and were absolutely thrilled to see Albert alive, free and in person!”

On the stage was Malik Rahim and other members of the original Black Panther Party in New Orleans, along with Herbert, who had written and produced a play about the Angola 3 while living in Houston after Hurricane Katrina.

In the audience was Robert King, who was at the prison gates when Woodfox walked out. King had been released from Angola in 2001 when his conviction was finally thrown out. After living in solitary for 29 years, King has spent the last 15 years speaking around the world to supporters of the Angola 3 and educating people about the horrors of solitary confinement. His guiding promise when released was: “I may be free from Angola, but Angola will never be free from me!”

In an emotional reunion at the Ashe Cultural Center, King took the stage to the beat of African drums and gave Woodfox a big bear hug.

The next morning Woodfox put roses on the grave of his mother, who had died in the early 1990s. He had been denied permission to attend the funeral. He said he wanted to tell her goodbye.

In an interview with the New Orleans Advocate, Woodfox said one of his first impressions of the world outside prison was having a wide, front-seat view of the landscape as his brother drove him away from jail. “It felt strange because I was sitting in the front of his car rather than the back of a van,” Woodfox said.

Held even after judge ordered his release

Family and supporters had expected Woodfox to be freed last summer, after Judge James J. Brady of the U.S. District Court for the Middle District of Louisiana ordered him released and forbade a retrial. But the state of Louisiana immediately appealed to the U.S. Court of Appeals for the 5th Circuit that stayed the release order.

“Although I was looking forward to proving my innocence at a new trial, concerns about my health and my age have caused me to resolve this case now and obtain my release,” Woodfox said in a statement after he was freed. He pled no contest to a couple of lesser charges instead of subjecting himself to another trial, and was released on the basis that he had already served more years than those charges called for.

Woodfox spent nearly 44 years alone in a windowless 6-by-9-foot cell. He was allowed out for only an hour a day. He wasn’t allowed to have a prison job and ate all his meals in the cell, which was separated from a hallway by metal bars. 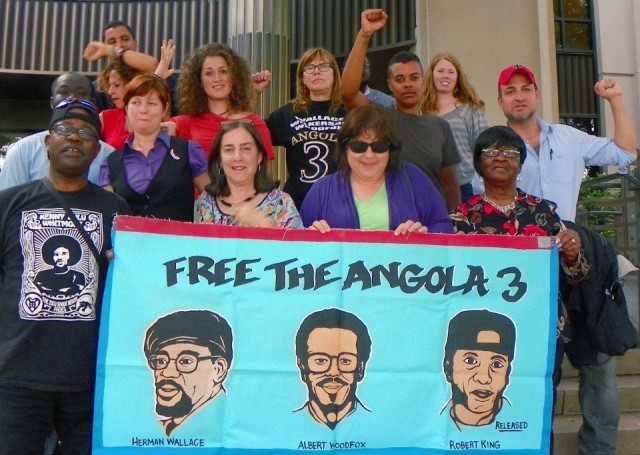 Amnesty International had launched a worldwide campaign to free the Angola 3 and end their solitary confinement. In a report released in 2011, Amnesty asked that Louisiana release the two men who remained in jail, as there was no physical evidence that they had killed anyone and their confinement was a violation of not only the U.S. Constitution but international law.

Although plans for his life outside prison are still being formed, one thing Woodfox intends to do is fight to end solitary confinement. He, Wallace and King in 2000 filed a federal civil rights suit against the state of Louisiana for its use of solitary. The trial is now set for June. Woodfox is likely to be the person held longest in solitary confinement in U.S. history.

Parnell Herbert told Workers World he plans to spend two months of weekends in April and May producing his play on the Angola 3 so that “Albert can see just one of the many ways people worked together and educated people about who the Angola 3 were and what torture they were living under.”

As of Feb. 22, Woodfox has been out of prison three days. Activists are making plans for many reunions and events. They want supporters to know that “Albert will never be alone and will be surrounded by people who love him and plan to take care of his pressing health needs. And everyone will get the opportunity to meet him and support him on this new road of his life.”

Rubac is a longtime spokesperson for the Texas Death Penalty Abolition Movement in Houston.