Baltimore — On Feb. 19, protesters with People’s Power Assemblies demonstrated here outside the Margaret Brent Elementary School in solidarity with Flint, Mich. They also spoke out against the ongoing lead problem in Baltimore. Since 2007, all water fountains in Baltimore public schools have been shut off. Students are offered bottled water, but that’s not enough. In many neighborhoods people still drink tap water in their homes. Even carbon filters used in pitchers only remove 52 percent of the lead, according to one study. 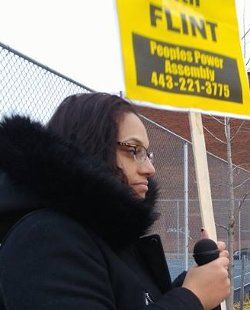 Ariane McBride, Baltimore parent of five children, said, “It’s absolutely ridiculous that the city has done nothing to fix this. You think about all the mental and emotional problems lead poisoning causes. It really damns these kids for life. It’s not just new pipes we need. We need social services, counselors.”

Martha Grevatt, who was part of the Detroit Workers World delegation to the Flint rally the same day, spoke via telephone to the Baltimore crowd. Describing conditions in Flint and the demands being made by the people, she noted that at least 11 people have died as a result of the crisis, including two teenagers on Feb. 14. The people there demand the arrest and prosecution of those responsible, including former emergency manager of Flint Darnell Earley (Democrat), as well as Gov. Rick Snyder (Republican).

Elder C.D. Witherspoon, president of the Baltimore Chapter of the Southern Christian Leadership Conference, gave a riveting condemnation of Gov. Snyder and other officials involved in both crises: “It’s funny how [Snyder] calls this his ‘Katrina.’ [People] were very, very aware of the state of those levies in New Orleans. But they were even more aware of lead in Flint. There was never any question of being able to evade this. This was not an act of nature! This was an act of genocide!” 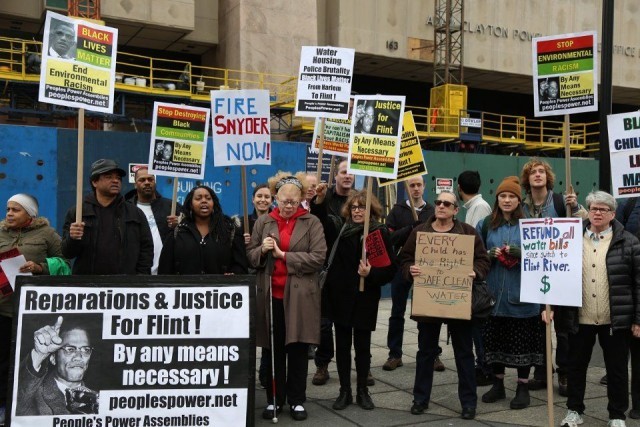 Activists in New York with the People’s Power Assembly, ‪Black Lives Matter‬ and environmental justice groups commemorated the 51st anniversary of the assassination of Malcolm X with a rally and march to demand justice for the people of Flint and to oppose environmental racism. ‪The march went from the Harlem State Office Building to Harlem Hospital.

“Wake up and fight back! There’s no greater message on this anniversary of the assassination of the most shining, brilliant, brave prince of the Black Liberation Struggle to take to the people,” PPA activist Larry Holmes said. “We say jobs are a right. A decent wage is a right. Clean water is a right, too. That is a part of the struggle against racism.”

Brenda Ryan contributed to this article.