By Vivian Weinstein and the Workers World Milwaukee bureau 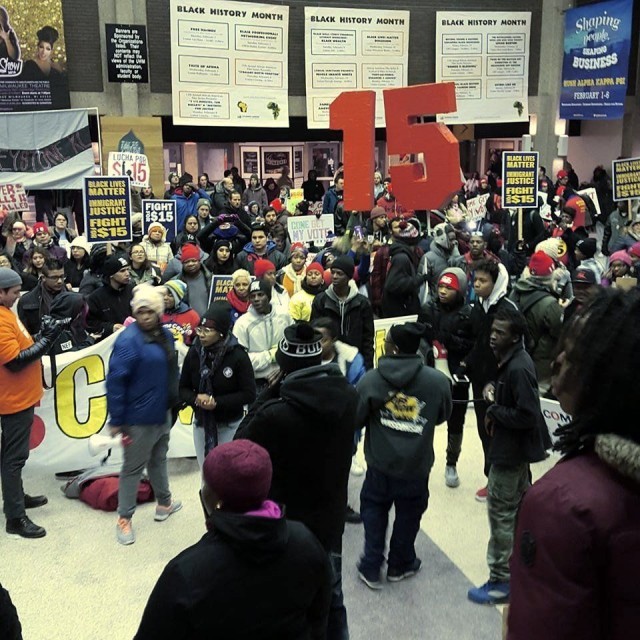 Hundreds took to the streets Feb. 11 in Milwaukee to confront the Democratic Party debate between Bernie Sanders and Hillary Clinton held at the University of Wisconsin Milwaukee’s Zelazo Center.

Despite dozens of police and other repressive state agents’ harassment, protesters with signs and banners from the Fight For $15 movement marched to demand a living wage. Activists from Youth Empowered in the Struggle demanded an end to raids and deportations of migrants and that the U.S. get out of Latin America and the Caribbean. Students for a Democratic Society and other campus organizations demanded a future without crushing debt, expressed support for campus workers and called for resources to benefit students of color; lesbian, gay, bisexual, transgender, queer and women students in general; and workers.

Retirees and other workers, including many Teamsters and members of the Wisconsin Committee to Protect Pensions, demanded a secure retirement and an end to the theft of their hard-earned retirement funds. Black Lives Matter activists demanded an end to police terror and justice for Dontre Hamilton, who was killed by a Milwaukee police officer in 2014, and all those killed and brutalized by the police.

Other organizations such as the Latin American Solidarity Committee, the Milwaukee Antiwar Committee, the Milwaukee Palestine Solidarity Coalition, the Wisconsin Bail Out the People Movement and Workers World Party demanded an end to imperialist wars and money for the people, not the Pentagon and the banks. Anti-war activists reminded protesters that the UW-Milwaukee library is named after the late Israeli prime minister, Golda Meir, who led the apartheid settler state to steal Palestinian land and butcher its original occupants.

At one point during the evening, Fight For $15 workers occupied the media room for the debate, housed at UW-Milwaukee, to righteously and loudly demand social and economic justice. 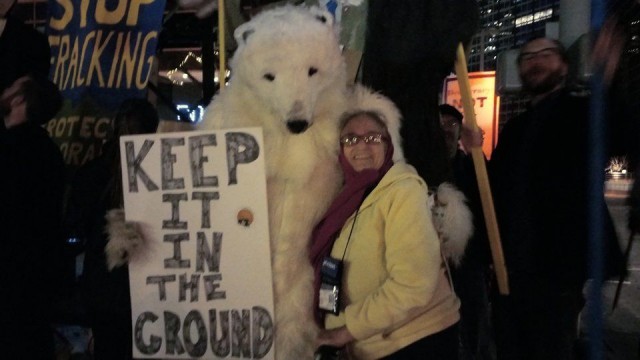 Two days later, on Feb. 13, hundreds protested at a Democratic fundraiser in Denver attended by presidential candidates Hillary Clinton and Bernie Sanders. The demonstrators demanded an end to fracking and for development of renewable energy.

The young protesters understand the connections, which not a single candidate has addressed, between trade deals, environmental imperialism and the disproportionate misery of the poor, who do not produce the carbon that the imperialists do. The candidates must be forced to face these issues. Wars and the U.S. military are enormous users of oil, hence they are producers of carbon. U.S. wars are bad for the Earth, and the cost impoverishes our cities and towns.