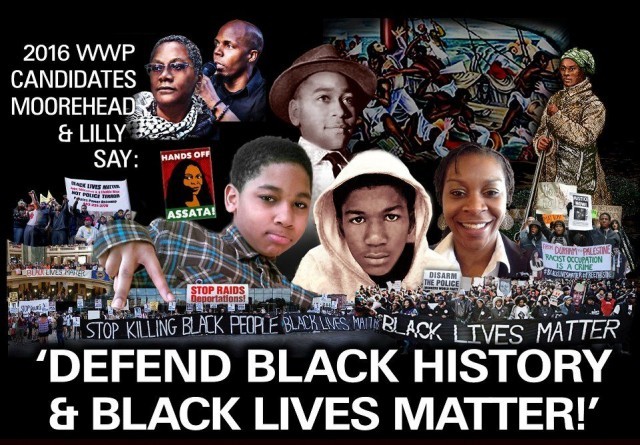 The capitalist system — whose main feature is to make profits for the billionaire ruling class at the expense of the rest of humanity — should and must be ABOLISHED, root and branch. Why? Because this system that feeds off the super-exploitation of the labor of the workers and oppressed peoples on a global scale is resulting in unimaginable poverty, suffering and hardships.

One of the greatest weapons the ruling class uses to protect its wealth is institutionalized racism, intended to keep the multinational working class divided and weak so it can’t fight in its own class interests.

How else could the ruling class get away with the horrors inflicted on Flint, Mich., which have made national and international news? The 100,000 people of Flint, including 9,000 children under the age of 6, have been poisoned for at least two years with lead-laden water carried through a corrosive system from the Flint River, which was polluted in the first place due to General Motors’ corporate greed and governmental neglect. As a result of the state’s indifference, children are suffering from lead poisoning, which causes irreparable disabilities and can lead to a slow, painful death.

Black people make up more than 50 percent of Flint’s population. Some 41 percent now live below the poverty line, caused by the devastating loss of jobs in the auto industry. Every demand for water justice by Flint’s people must be met immediately.

For the past four years, the Black Lives Matter movement has helped shine a bright light on police violence and state repression. The capitalist state, especially the police and mass incarceration, is carrying out a genocidal war of brutality and killings against Black, Brown and Indigenous youth in grossly disproportionate numbers. The current stage of the capitalist economic crisis of overproduction provides nothing more than low-wage jobs and no future for youth of color or less privileged white youth.

The BLM movement has broadened its view of the struggle to fight racist repression by showing solidarity with the embattled people of Flint, especially the Black community. The Black Lives Matter National Network posted a solidarity statement with Flint, which has a 14-point program. It includes a moratorium on all water shutoffs; a refund of all water bills since the switch to the Flint water system; creation of a holistic medical care facility for Flint residents that will offer chelation therapy as treatment for lead poisoning; and creation of a Flint Citizen Civilian Corps to train local workers to repair the infrastructure. In introducing these demands, the BLMNN states: “The water crisis in Flint is one of many ways state agencies and elected officials have sanctioned violence against Black people.” (See full statement at workers.org.)

These demands and more should be framed as calls for reparations for the people of Flint, much like the call for “40 acres and a mule” that formerly enslaved people demanded following the end of chattel slavery. The demand for reparations is a political right, an indispensable step on the path to self-determination for people of color oppressed by colonialism, neocolonialism and present-day imperialism. This right can come in different forms, paid for by public or private funds.

Both Malcolm X and the Rev. Dr. Martin Luther King Jr. demanded reparations for Black people to compensate for their labor and resources, stolen by corporations like GM.

In fact, it should be GM that pays reparations to Flint’s people. For decades it dumped acid chemicals into the Flint River that eventually caused lead in the city’s water pipes to leach into the drinking water. (Truthout, Jan. 26) GM owes reparations for its genocidal poisoning of the Flint community and infrastructure, and GM should pay for completely replacing the lead pipes, estimated to cost $1.5 billion. It should be GM that pays reparations for the devastating loss of hundreds of thousands of jobs that forced half of the Flint population to leave over 30 years.

Demanding reparations for the people of Flint should be a main issue in the 2016 U.S. presidential elections. But that is pie in the sky. The Republican and Democratic candidates are either hostile or indifferent to empowering the people of Flint because these candidates do the bidding of corporations like GM.

The people’s organizations already in motion to provide clean water for Flint, from around the country and locally, could play an instrumental role in organizing for reparations.

Workers World Party sees this effort as a vital part of the broader struggle to abolish capitalism, which will commit any crime to boost the profits of the few. It must be replaced with socialism, where the economy belongs to the people and can be planned to satisfy all basic human needs, including clean water.