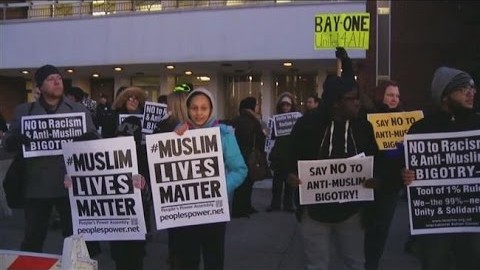 Bayonne, N.J. — More than 200 people came out here on Jan. 19 to stand in solidarity with the Muslim community in the face of a right-wing, racist attack on their application to build an Islamic community center on the site of an old warehouse.

A racist group, announcing they were supporters of Donald Trump and Pamela Geller, had said they would hold a protest at the Bayonne Zoning Board meeting to oppose an Islamic community center. The board had called the special session to take up the Muslim community’s zoning application for the center. The group’s letterhead and many neighborhood signs have attempted, through use of 9/11 and Twin Tower images, to frighten Bayonne residents.

The media in New Jersey had reported this opposition as if it represented the whole community.

But the strong, unified response to this threatening, anti-Muslim rally clearly exposed them as a narrow, bigoted grouping without community support.

The rally showing support for the Islamic community center, although organized in only three days, was far larger, very multinational and drew community support from Bayonne and other parts of Hudson County, including Jersey City, which borders Bayonne.

The Jersey City Peace Movement and the International Action Center set up a Facebook event page, “Stand with our Muslim Neighbors,” and began making calls to area community activists two days before the rally. Veterans For Peace Chapter 21, N.J. Peace Action, Action 21 and Food Not Bombs immediately responded with their own round of calls and emails. Gene Forrest, a Bayonne high school teacher and lifelong resident of Bayonne, also started reaching out in Bayonne with a Facebook page message to “Show Our Solidarity.”

Some 50 signs with the slogan “No to racism and anti-Muslim bigotry” were quickly distributed. Four television stations and many other reporters showed up. Initially, they clustered almost exclusively around the small group of racists on one side of a barricade, all but ignoring the far larger anti-racist group on the other side — until the activists demanded coverage.

Both sides packed into the zoning board hearing. The zoning application for the Islamic center was the only agenda item. The session lasted almost four hours and gave endless time for the opponents of the Islamic community center to treat the hearing like an Inquisition.

The zoning board, a body that is all men and white except for one Latino business owner, hardly represents Bayonne. They made no effort to rule out of order the insulting harangues of opponents of the proposed center. Then, they declared that still another hearing would be needed in two months to have time for further questions.

The next hearing is slated for Monday, March 14, at 6 p.m. Supporters of the Muslim community’s right to build their center pledged their continued solidarity.

Flounders is a 25-year resident of Jersey City, N.J.