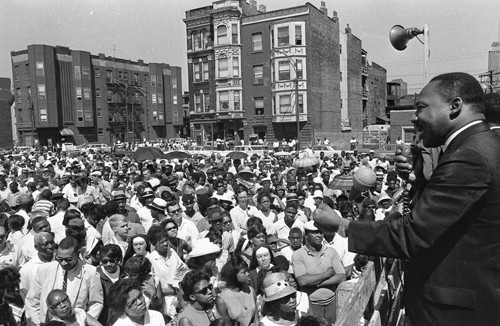 January 7 was the 50th anniversary of the Chicago Freedom Movement, launched by Dr. Martin Luther King Jr. in 1966 to end slum housing in Chicago. This campaign, also known as the Open Housing Movement, led to the passage of the Fair Housing Act of 1968. It opened up a fight not only for housing rights but also for jobs and against police brutality in the North.

To mark this anniversary, on Jan. 16 the Peoples Power Assembly in Baltimore will be gathering outside the downtown office of Housing Commissioner Paul Graziano. That’s at 417 E. Fayette St., across from City Hall. The protesters will demand justice for all public housing residents, the repair of all public housing and the commissioner’s firing. They will also demand the rehiring of housing authority worker Lucky Crosby, who helped blow the whistle on the sex-for-repairs scandal.

The PPA has launched a campaign to win rights for housing project residents and to end slum housing. The group has visited hundreds of homes in housing projects and collected an equal number of signatures on petitions demanding repairs, going door-to-door in Gilmor Homes, McCullough Homes, Latrobe and O’Donnell Heights.

Recently, the federal government has awarded close to $10 million in a class action suit to women who were victims of being forced to trade sex for repairs of their homes.