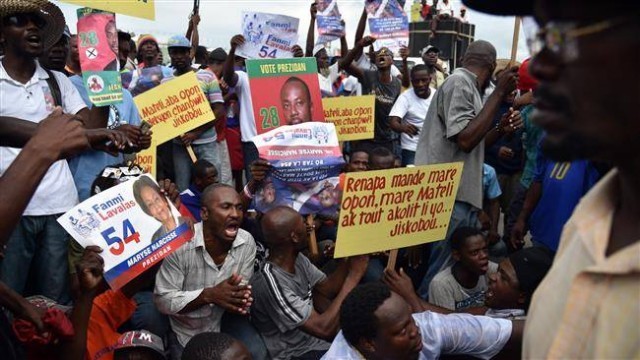 Jan. 3 — Thousands of Haitians protesting in the streets against the patently fraudulent presidential elections held Oct. 25 led the Provisional Electoral Commission to suspend the second round of voting set for Dec. 27.

The Haitian media received a call from de-facto Prime Minister Evans Paul on Dec. 24 that a new “independent” verification commission would be announced at 6 p.m.  After they examined the history of members of this commission, it was clear that they all had strong ties to the present regime led by Michel Martelly. (sentinel.ht, Dec. 28)

But before this third report “verifying” the conduct of the Oct. 25 election was issued, U.S. Ambassador Peter Mulrean weighed in on the results.  In interviews with La Nouvelliste, the largest daily paper in Haiti, and Radio Télé Kiskeya, a radio station with a large following, he blatantly asserted that the U.S. Embassy had observers throughout Haiti who “did not see any fraud.” This was also the conclusion of the Organization of American States and European Union observers.  Mulrean said the outcome should be respected.

The State Department’s coordinator for Haiti, Kenneth Merten, in an interview with the Voice of America picked up by La Nouvelliste, said he was confident that the commission would set the run-off between Jovenel Moïse (LAPEH) and Jude Célestin (PHTK), who came in first and second respectively in the first vote.

Given that Washington, the imperialist power controlling Haiti, spoke so firmly, the verification commission verified what it was told to verify. President Michel Martelly announced the new date in his Independence Day speech on Jan. 1, the day Haitians celebrate their long war that won freedom from French colonialism and ended slavery in 1804.

The 1990 election in Haiti that put Bertrand Aristide in office was the first election that brought the Haitian people into political life beyond simply standing in line and voting. Currently, thousands of protesters come out in the streets throughout the country, responding to calls from a radio show and word of mouth.  Setting the date of the election doesn’t settle how the Haitian people will respond to a president imposed by Washington.