“Sandra Bland, Say Her Name!” rang out in downtown Houston on Dec. 17 as hundreds of African-American activists and their supporters rallied, marched, drummed and chanted. Two hours later they packed the courtroom for a status hearing on the federal civil rights lawsuit filed by Sandra Bland’s family.

Bland was found dead in a Waller County jail cell last July 13, three days after being arrested for failing to signal a lane change. Led by the National Black United Front, the protesters demanded answers and decried that a Waller County grand jury had only met twice since Bland’s death six months ago. 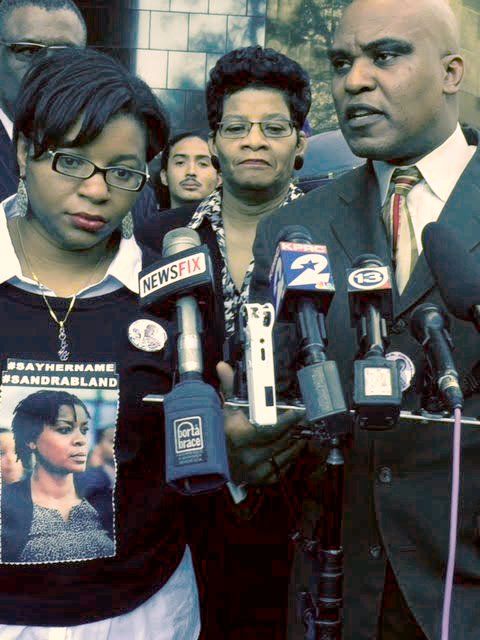 “We demand answers, not a cover-up,” said Kofi Taharka, the national chair of NBUF. Other activists were with the New Black Panther Party, Out of the Flames of Ferguson, the Texas Death Penalty Abolition Movement, the National of Islam, Justice or Else, as well as many youth with the Black Lives Matter movement.

Bland’s death just 60 miles from Houston added fuel to the anger and outrage burning in Black communities in Texas and around the country where police murders of unarmed Blacks and Latinos/as happen so often that activists struggle to fight all the injustices.

According to the Mapping Police Violence website, over 321 African Americans have been killed by police in 2015, and one-third of them were unarmed.

Texas and county officials have declared Bland’s death a suicide by hanging. Bland family lawyers say that as of now the cause of death is undetermined. No evidence has been revealed to them, including the plastic bag that Bland allegedly used to hang herself. And if any fingerprints were taken off the bag, they have not been made public.

Houston activists were joined by people from around the state for the first hearing in the Bland family’s civil rights suit. Unlike the usually massive courtrooms in the federal courthouse, a small room was the venue for this hearing, so only around 80 people could cram inside to hear the hour-long proceedings. Another 100 people stood outside in the hallway, straining to hear. Security was oppressively tight, and many people left rather than be subjected to it.

U.S. District Judge David Hittner presided over the hearing and set jury selection for the trial for Jan. 23, 2017. He ruled that all discovery in the case must be completed by Sept. 30, 2016.

Hannah Adair Bonner is the curator of The Shout: a spoken-word, poetry-focused, “artivism” movement seeking to nurture a community of multi-ethnic, multigenerational, justice-seeking, solidarity-building people. She serves on the staff of St. John’s Downtown in Houston and has been working on the case daily since Bland’s death.

In her blog at soulunbound.com, Bonner chronicled the hearing, saying in part: “‘Let me know if I need to pry it loose,’ Judge David Hittner said at the status hearing for the Civil Trial brought by the family of Sandra Bland. ‘Pry it loose.’ It must have been the third time at least that he used that particular combination of words in his remarks that day.”

Bonner continued: “As the proceedings ended, it was clear that at least for today, whatever the defense for the State and County had behind their back, they were not going to show it any time soon.

“Judge David Hittner made it clear, however, that he did plan to pry those fingers loose. So dates were set for the coming year for Summary Judgement, for the Ranger report, for expert witnesses, for the end of motions, for the end of discovery, and for the end of introducing new parties.”

After the hearing ended, Bland’s mother, two sisters and the attorneys spoke to well over 100 supporters, who had begun another demonstration outside. Attorney Cannon Lambert Sr. said the legal team was grateful that the judge wants to have full disclosure.

Reed-Veal told the crowd that it was still so difficult for the family to even speak about Bland, but “I want you to know that Sandra Bland was more than a hashtag and we will continue fighting for justice for her.”

As the anger of people around the U.S. builds over one police killing after another, one thing is noticeably missing: a federal record of just how many people die in police custody each year.

What we do know in Texas is that a young, educated, articulate Black woman with an understanding of the racism in Waller County died in its jail. Bland graduated from Prairie View A & M University, a historically Black university in Waller County, and had come back to begin a new job at the university. She had a lot to live for. Now she is dead, and her family and the community at large are determined to find out the truth.