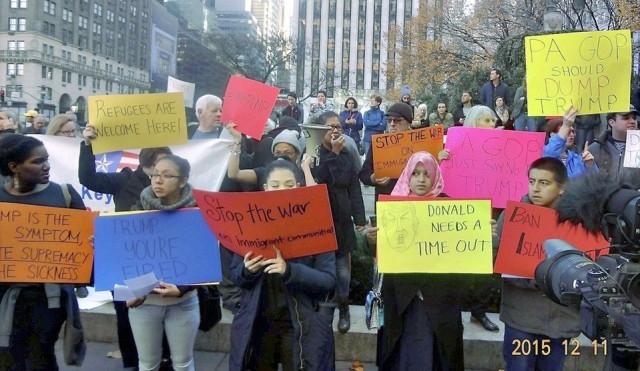 New York — On a warm Dec. 11 here at the pricy Plaza Hotel, which looms over the southeast corner of Central Park, Donald Trump was set to be the keynote speaker for the Pennsylvania Republican Party’s annual Commonwealth Club fundraiser luncheon. The event became more interesting as demonstrators disrupted from inside the Plaza while others, gathered outside the hotel, condemned Trump’s anti-Muslim statements.

The hotel is only a few blocks from Trump’s own “Plaza,” a mixed use skyscraper across Fifth Avenue on 56th Street, where a large coalition of organizations has called for an anti-Trump protest on Sunday, Dec. 20 at 2 p.m.

Trump’s rallies have become gathering points for racist and pro-fascist bigots around the country, making such disruptions necessary for those wanting to build solidarity among workers and all people facing oppression. Since a well-organized group interrupted Trump’s rant 10 times in North Carolina on Dec. 4, these disruptions have become increasingly common at his events.