Dec. 5 — An African-American political prisoner in Michigan may be isolated in the far north Marquette Branch Prison in the state’s Upper Peninsula, but support for this embattled activist is growing daily.

The Rev. Edward Pinkney is starting his second year behind bars after an outrageous corruption of the legal system took place in a Benton Harbor, Mich., courtroom. He was sentenced to two-and-a-half to 10 years in prison because five dates on a mayoral recall petition in 2014 allegedly appeared to have been altered. No evidence was presented to the all-white jury linking Rev. Pinkney to those charges. In fact, the prosecutor told the jury, “You don’t need evidence to convict Pinkney.” Pinkney’s leadership position in the Black community and progressive movement in Benton Harbor was all they needed to find him guilty of five felony counts of forgery. 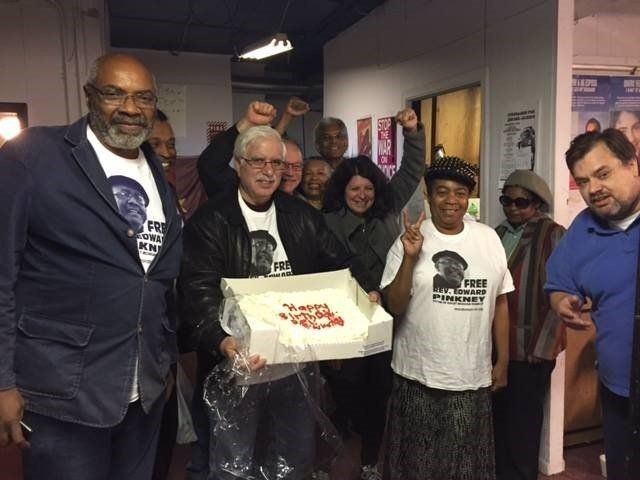 Rev. Pinkney, even though he has violated no prison rules, has been denied telephone use for the next six months because of bogus charges by the racist Marquette guards. On Nov. 20, he was seized by guards after a visit from a supporter who had flown to Marquette from Detroit. The reason given was that his visitor had taken notes during their discussion, as the visitor and others had done many times in the past, and walked out of the area with the notes. The 67-year-old Pinkney was thrown into solitary confinement in the super maximum Level 5 section of the mainly Level 1 prison. He was held there for five days after which he was returned to Level 1.

Rev. Pinkney has informed his supporters that the bogus charge of “smuggling” was so ridiculous that even the biased prison system had to dismiss it. Many believe the real motive for curtailing Rev. Pinkney’s visits and contact with the outside was the widespread coverage of a press conference about his case shown on TV-6 (an NBC affiliate) and TV-10 (ABC) in Marquette, which infuriated prison officials.

Pinkney had written his supporters: “I was transferred to Marquette Prison, shackled, mistreated and intimidated. I was forced to strip on five different occasions. I am forced into overcrowding, inadequate exercise, lack of clean clothing, and inadequate medical care. I believe that [they] have put a hit on me, inside the prison system. I believe they are trying to force me to die in prison. If I do not survive this, you will know the reason why.”

Media around the United States have started to take note of this miscarriage of justice. Radio stations in California and Wisconsin have interviewed leaders of the “Free Rev. Pinkney” movement.

Support has been building for the Emergency Conference to Save Rev. Pinkney in Detroit on Dec. 12. Among the scheduled speakers are Dorothy Pinkney, Rev. Pinkney’s spouse, and two of the lawyers working on his appeal. Participants are coming from across Michigan as well as other regions of the country. Workers World Party’s vice presidential candidate, Lamont Lilly, will be attending the conference.

Pinkney supporters turned out on Detroit’s “Noel Night” on Dec. 5, when main streets around the University District and Art Institute were closed and thousands of people thronged to visit booths and join in holiday caroling. Standing in front of the Detroit Institute of Arts, activists unfurled a Free Rev. Pinkney banner and held up signs, spoke over a powerful sound system and distributed hundreds of informational leaflets to passersby, who showed a great deal of interest in the case.

Social media outreach has drawn support from France, where activists contacted organizers of the Emergency Conference to ask how they can help. An international campaign has already been launched to get supporters to 1) send a holiday greeting card to Rev. Edward Pinkney #294671, Marquette Branch Prison NE-93, 1960 U.S. Hwy. 41 South, Marquette, MI 49855; 2) call Gov. Rick Snyder at 517-373-3400 and Legislative Corrections Ombudsman Keith Barber at 517-373-8573 to demand they investigate the inhumane treatment of Rev. Pinkney; and 3) contribute to Rev. Pinkney’s legal defense at bhbanco.org using the PayPal button or mailing a check to BANCO, c/o Dorothy Pinkney, 1940 Union St., Benton Harbor, MI 49022.

The Conference to Save Rev. Edward Pinkney will be held in Detroit on Saturday, Dec. 12, 12 noon to 5 p.m., at St. Matthew-St. Joseph Episcopal Church, 8850 Woodward Ave. (at King Street).