A gathering of African leaders and European Union member-states in Malta has proposed a financial package of nearly $4 billion, ostensibly to halt migration from Africa to Europe. European governments say they are willing to send funds to Africa to decrease migration. Such a program would, in effect, turn African presidents and prime ministers into Europe’s gatekeepers. 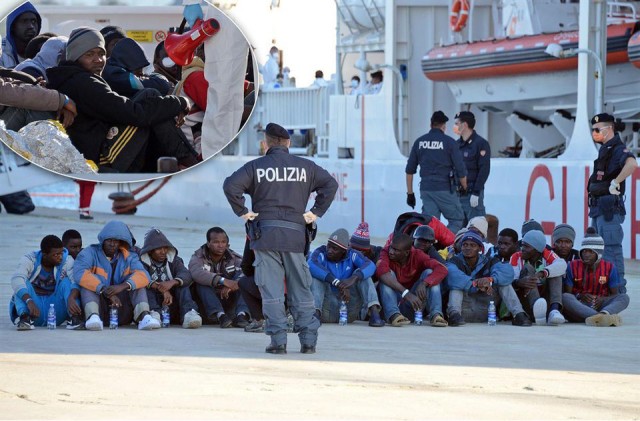 Today, the level of dislocation internationally is worse than during any other period since World War II. In Syria alone, some 11 million people have been displaced, with 4 million outside the country. People from Africa and Asia are flooding out of their regions seeking refuge from imperialist war and capitalism’s burgeoning world crisis.

Rather than address the causes of dislocation and migration, European imperialist states and their allies are seeking to contain the crisis inside the borders of the oppressed nations — the same nations the imperialists destroyed through centuries of enslavement, colonization, neocolonization, superexploitation and militarism.

Hundreds of thousands of migrants have recently crossed the Mediterranean Sea into southern, central and eastern Europe, creating a humanitarian crisis and exposing the EU governments’ racism. Despite the EU’s offer of billions to stem migration, African leaders, even those closely tied politically and economically to the imperialist states, have looked upon these proposals with skepticism and outright rejection.

Moreover, the EU countries have not raised the funds for this proposed project. Their commitment is lukewarm, apparently reflecting doubts about its efficacy. Pledges of assistance have done little to halt migration when European states’ foreign policies have largely been shaped by Washington’s “war on terrorism.”

Growth in migration from Africa to Europe has accelerated this year, dividing the EU politically. Hundreds of thousands of migrants are being trafficked across North Africa to the Mediterranean Sea, where countless numbers have drowned.

Migrants have run into barriers and brutality in eastern Europe, where several governments seek to ban people originating in Africa, the Middle East and Asia from entering their countries. Images of desperate migrants being hosed with water cannons evoke sympathy for their plight as well as outrage.

“Cross-border co-operation is disintegrating as barbed wire goes up and borders slam shut across Europe. … Even Germany is toughening border regulations … in stark contrast to the warm welcome given to hundreds or thousands earlier this autumn.” (BBC, Nov. 13)

Divisions in the EU prompted Council President Donald Tusk to warn that Schengen — the EU agreement allowing passport-free border passage across much of Europe — is in danger of collapse. This accord has been championed internationally as a major contributor to the continent’s integration.

The EU fails to address the underlying issues of imperialist war and the global economic crisis, relying instead on military and police solutions. This new scheme to fund African states to essentially imprison their own people will also collapse.

The Nov. 13 attacks in Paris that resulted in 129 deaths in operations claimed by the Islamic State have prompted a security crackdown in France and other EU states. On Nov. 16, Socialist Party President François Hollande called for revision of the French Constitution to allow greater powers for intelligence and law-enforcement agencies.

Hollande immediately escalated France’s bombing of Syria. This response will further dislocate people inside and outside the embattled state, while the doors of migration will be further closed from Europe to the U.S., where some politicians have announced Syrian nationals will be denied admission.

Washington has led world imperialism’s assault, which has laid waste to huge swaths of territory throughout North and East Africa, extending into the Arabian Peninsula and central and southern Asia. The U.S./NATO occupation of Afghanistan was carried out under the guise of fighting “Islamic extremism and terrorism.”

This war was a direct outcome of the Carter administration’s efforts in 1979 to undermine Afghanistan’s Soviet-allied socialist government. With the fall of the Soviet Union and other European socialist states, imperialism’s emphasis shifted to the attempted realization of a “unipolar world,” where Washington and its western European allies would dominate military and economic power globally.

Consequently, the “war on terror” is a misnomer. The advent of many of the “extremist groups” is a direct product of imperialist foreign policy.

Castro asked: “Would it not be preferable to struggle to produce food and industrial products; build hospitals and schools for billions of human beings who desperately need them; promote art and culture; struggle against epidemics; or finally eliminate illnesses which affect the vital systems of human beings?”

Castro concluded: “If today it is possible to prolong life, health and the productive time of persons, [and] to plan the population’s development in accordance with growing productivity, culture and development of human values, what are they waiting for to do so? Just ideas will triumph, or disaster will triumph.”