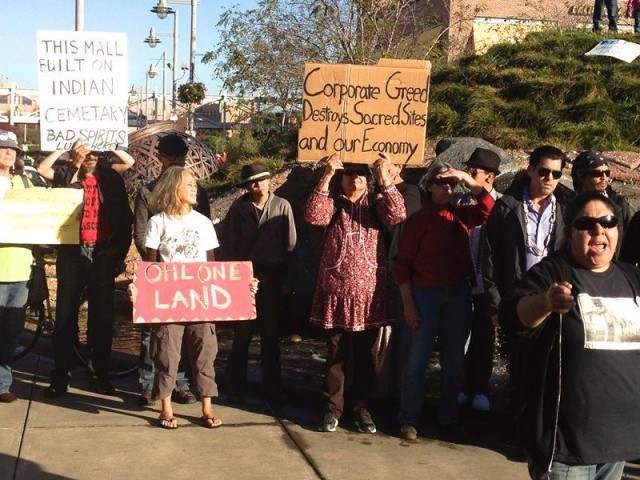 In 1999, the city of Emeryville, Calif., built the mall that now sits on the corner of Shellmound Street and Ohlone Way. This space was once a Ohlone Indigenous village site and was one of the largest shellmounds in the Bay Area. The sacred shellmound once stood over 60 feet high and 350 feet in diameter. It was considered the largest funerary complex of the Ohlone people.

Sixteen years later on Nov. 28, over 100 protesters gathered, temporarily blocking a main intersection to the mall.

Protest organizer Corrina Gould commented, “When the mall was built, we petitioned the City Council and asked them not to destroy our sacred sites, but the developers and the businesses ignored our voices. Although the mall was built, our resistance is alive and it has never died. Hence, every year, on the day after Thanksgiving, the biggest shopping day of the year, we’ve organized an educational protest to remind everyone that Ohlone peoples are alive in the Bay Area and we aim to educate the public on why and how the desecration of Ohlone sacred sites hurts Ohlones and everyone living here in the Bay Area. We also ask people to not shop at this mall.”