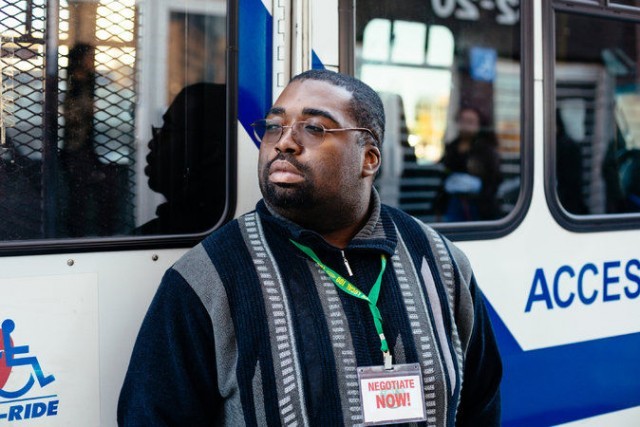 NYC Access-A-Ride workers push for $15 and a union

The mostly Black and Brown women workers at Access-A-Ride, the Metropolitan Transportation Authority’s transit service in New York City for people with disabilities, are demanding $15 an hour and a union as well as an end to a hostile work environment. They voted to join the Transport Workers Union Local 100 a year ago. The workers, employed by contractor Global Contact Services, earn from $9 to $11 an hour. Their wages are totally unfair, they say, since they provide a service for a state-run agency, and all state employees will soon be making $15 an hour.

Unfair firings contribute to the toxic work environment. The National Labor Relations Board recently consolidated several cases showing that 228 workers were fired for supporting the union between February and October. The NLRB is hearing two other types of cases: that GCS pays low wages because workers are predominantly women of color, and that a third of the workers have been sexually harassed by GCS supervisors.

TWU President John Samuelsen is in talks with GCS with the goal of averting a strike, which disability activists say would be “disastrous for those who rely on the service.” (New York Times, Nov. 28) Stay tuned.

As many as 200 aerospace workers protested at the Washington state Capitol in Olympia on Nov. 20 to demand that legislators take steps to close the Boeing Company’s massive tax loophole and tie tax incentives to job creation in the state.

In 2013, legislators extended $8.7 billion in tax incentives to aerospace companies, the largest corporate tax break in the U.S. Despite this, Boeing has since outsourced some 3,700 Washington jobs to such low-wage states as Missouri and Oklahoma (a “right to work” for less state), where the mega company can get additional tax breaks by increasing employment. Denouncing that as “double dipping,” machinist Adrian Camez said, “[Boeing is] taking our tax incentive, and taking their tax incentives, and taking our jobs to those other states.” (heraldnet.org, Nov. 21)

Since their contract expired on Aug. 1, about 40,000 Verizon workers from Maine to Virginia, represented by the Communication Workers and the International Brotherhood of Electrical Workers, have been fighting for a new contract. The workers have been holding pickets, rallies and marches in both local areas and regional mobilizations. The latest ones were held on Nov. 19 — CWA protested at 35 locations — and on so-called Black Friday, Nov. 27.

But Verizon, which reports revenue of about $1.5 billion a month, has refused to budge on contract terms. While Verizon’s CEO makes over 200 times as much as the average Verizon employee, the greedy company is offering no raises, a jump in health care costs and scaled-down pensions, at the same time it seeks to eliminate job security, accident disability and cost of living adjustments. Its ultimate goal is union busting — obvious from its demand to increase contracting jobs to nonunion workers.

“We do not have a willing negotiating partner,” CWA Local 1103 President Kevin Sheil told members in Poughkeepsie, N.Y. “The company’s practicing the art of race-to-the-bottom bargaining.” (cwa-union.org, Nov. 25) To sign a petition to Verizon, click on “For Allies” at the top right of standuptoverizon.com.

Four “Amazon Prime Now” delivery drivers filed a class action lawsuit in California against the online retail giant on Oct. 27. They charge that Amazon engages in widespread wage theft by misclassifying them as $11-an-hour contractors, denying them benefits, withholding $5 tips and forcing drivers to pay for gas and use their own vehicles for deliveries. After subtracting expenses, net wages fall below minimum wage.

The drivers, who wear Amazon Prime Now uniforms and report to Amazon’s warehouse, are represented by attorney Beth Ross. She won a similar class action suit this summer on behalf of FedEx delivery drivers in California, resulting in a $228 million payout to some 2,300 drivers. “The facts in this case are much stronger than in the FedEx case, and we won,” said Ross. (RHRealityCheck.org, Nov. 11)