Drivers of the Boston School Bus Union, Steelworkers Local 8751, are continuing their fierce fight against union-busting, corporate giant Veolia/Transdev. In 2013, Veolia, a French-based company, took over management of Boston school transportation. Operating as its merger partner Transdev, global Veolia then launched a vicious campaign against the union, its members and the communities it serves.

In the two years since, the union has been led by newly formed Team Solidarity, which brings rank-and-file activism into the bus yards every day. The union has forced Veolia back to the bargaining table with militant tactics. 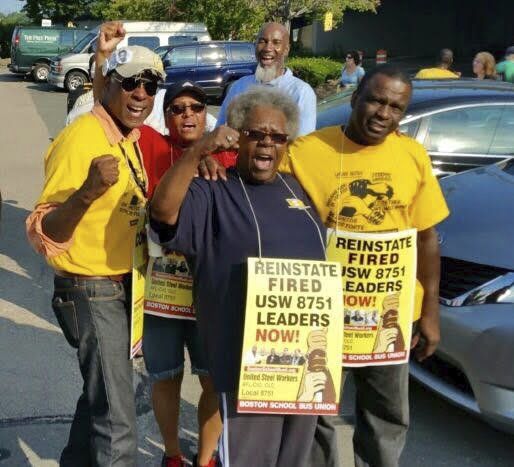 A hundred people joined the 18-member Team Negotiating Committee at the hotel in September where bargaining is going on. Rank-and-file workers and supporters filled the parking lot, blared union songs and created a shouting gauntlet through which Veolia and Boston Public School bosses had to pass. Then the ranks packed the Negotiating Committee room.

Union President Andre François and other USW 8751 negotiators expressed the leadership’s determination to beat back all Veolia/City concessions, win reinstatement of the four illegally fired leaders, as well as secure economic justice for the 900-plus members and their families. They vowed to bring the fighting power of the rank and file to the negotiating table and to the bus yards.

USW 8751 is a militant, politically active union that’s fought shoulder-to-shoulder with the Boston community in many battles throughout the years. This was the union that got children safely to school through racist mobs in the 1974 desegregation struggle. The current Veolia attack on USW 8751 is an aggressive austerity attack on a majority people-of-color union and on public education — those riding the buses are primarily young people of color.

Driver Georgia Scott, who was born in Selma, Ala., told WW in August: “This is the same struggle as 1965 in Selma. Schools were limited [there] — all black, all white. The education system did not work for people of color. … Veolia cutting back on the buses, that will limit our children, their safety and their choices of education.”

The Boston School Bus Union drivers are also the parents and grandparents of the students riding their buses. They live in the communities where they drive the buses and want the best for the children.

Previous USW 8751 contracts established strong standards for bus safety, routes allowing drivers to get children to school on time and limits on ride duration for children with special needs. Veolia/Transdev has tried to cut these kinds of safeguards out of the new contract since the company will make greater profit by forcing children off buses onto the Boston Mass Transit (MBTA) and by pushing drivers to “save time” by going out in unsafe ­buses.

Georgia Scott, the grandmother of school-age granddaughters in Boston and Local 8751’s treasurer, comments: “A camera is not going to protect the child. It’s me. I’m the one who will protect the child. That’s the most important piece of our work, the monitors and the drivers. We are the safety zone for the children.”

In current negotiations, USW 8751 is in a fight with Veolia to remove unacceptable political, contractual and monetary concessions from the new contract. All but a few of those concessions have been beaten back, but those remaining are of critical importance.

Team Solidarity continues in stalwart negotiation for a fair contract that respects them and the children riding the school buses.

And while they bargain, the drivers are also wearing T-shirts with a poised cobra and a “Will Strike if Provoked” slogan.

USW 8715 asks for your support in this crucial stage of contract negotiations. For more information and to donate, you can go to youcaring.com/rehirethe4.