All across the United States from Burlington, Vt., to Cincinnati, Chicago, Minneapolis, San Diego, Seattle and Portland, Ore., and many cities in between, thousands took to the streets demanding an end to the police killings of African Americans. 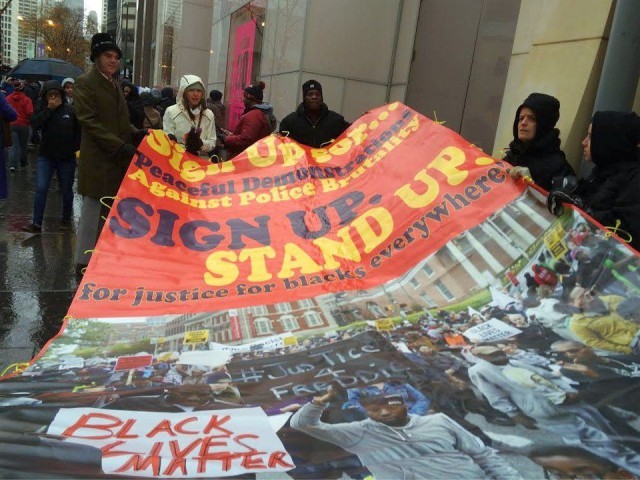 In Chicago the Magnificent Mile was the target of demonstrations in the Loop, where like in other cities and suburbs, the capitalist retailers encourage mindless consumption during the period between late November and the beginning of the new year.

Advertising agencies expend tremendous resources to encourage workers and oppressed peoples to enter the shopping fray by offering purported “deals” on electronic merchandise, much of it marketed to children and teenagers. Major U.S. firms gauge their performance during this season as a barometer of the viability of the capitalist system overall.

Despite these monumental efforts by retailers, sales were down for  so-called “Black Friday” and the holiday weekend. Corporate media outlets that advance the notion of consumer confidence as a key aspect of the strength of the U.S. economy, attributed the decline in revenue to factors such as early shopping and online purchases.

According to Reuters, “Data from analytics firm RetailNext showed overall sales for both days fell 1.5 percent on flat customer traffic, while average spending per shopper dropped 1.4 percent. Preliminary data from ShopperTrak showed sales at stores totaled about $12.1 billion on Thursday and Friday. The company said it is an ‘estimated decrease from last year’ but did not give the percentage decline due to an internal change in the way it calculates data. Last year, it reported sales of $12.29 billion for the same period.” (Nov. 28)

The U.S. population is rising. There is supposedly an economic recovery going on. That this translated into lower sales during the premiere time for showcasing new merchandise bodes ill for the future of capitalist retail markets. Other factors must be responsible for the fall in sales and thus in profits.

Numerous social media groups and individual pages had advocated for a refusal to shop on Black Friday, saying the day should be one of protest. The corporate media did not give this effort serious consideration when providing explanations for declining sales.

The Reuters article also reported, “The data highlights the waning importance of Black Friday, which until a few years ago kicked off the holiday shopping season, as more retailers start discounting earlier in the month and open their doors on Thanksgiving Day. … [D]espite the fall in sales over the two days, the performance must be interpreted as a good one for retail stores because sales held up amid rising competition from online shopping and were better than expected due to pent-up consumer demand and lower gas prices.”

Even capitalist publications such as Forbes report that the real measure of  viability in the economy must take into consideration the size of the labor force and the labor force participation rate (LFPR). The so-called “recovery” from  the 2008 Great Recession has been weaker than after any other recovery since World War II ended.

The size of the labor force has been almost flat over the last seven years. At the same time the labor participation rate is at its lowest in nearly 40 years. This is a more accurate measure of unemployment than the current 5 percent jobless rate reported during the first week of November.

At the time of the stock market crash in early 2000, called the bursting of the “tech boom,” the labor force participation rate had peaked at 66.8 percent. Over the last decade and a half, there has been a steady decline in this factor that began even before the Great Recession and then triggered tens of millions of layoffs and job eliminations. As of October 2015, the LFPR was 62.4 percent, the lowest rate since October 1977. “A declining rate indicates that more individuals are dropping out of the job market,” noted Forbes.

The national question and the labor market

African Americans make up a larger than proportional segment of the people no longer in the job market. Though the overall official unemployment rate is 5 percent, among African Americans it is 9.2 percent, or nearly twice the national average.

Forbes says, “If the labor force is the economic engine, consumer spending is the fuel.” Nonetheless, this capitalist mouthpiece continues to advocate the same pro-rich policies of lessening regulations and lowering taxes for the ruling class. These same measures have created an even wider gap between rich and poor as well as Black and white income and wealth levels.

These statistics indicate that recession level conditions exist in African- American communities. This provides another factor in the rising anger against institutional racism and national oppression as manifested through mass demonstrations and urban rebellions in Ferguson, Mo., and Baltimore during 2014 and early 2015.

Tensions reached enormous levels on Nov. 23 after the shooting of five Black Lives Matter protesters outside a police station in Minneapolis. In Chicago daily demonstrations since Nov. 24 have demanded the firing of the police commissioner and chief over a video of the blatant killing of a 17-year-old last year.

Demonstrations during the initial weekend of the holiday retail season were carried out in part as solidarity actions with the people of Minneapolis and Chicago. In addition, the spreading of anti-racist rallies, sit-ins and ideological struggles on university and college campuses led by African-American students contributes immensely to a social atmosphere of defiance and immediacy.

One year ago in the aftermath of the rebellions in Ferguson, Mo., and the subsequent expansion of the Black Lives Matter movement, which was founded in 2012, African Americans and their allies escalated their demonstrations by marching into shopping malls, disrupting business and blocking highways and thoroughfares to illustrate the urgency of the crisis of police abuse and killings and the refusal of the state apparatus to take remedial actions.

These manifestations will continue and expand because the federal government and the capitalist ruling class have no plans for the African-American people and other oppressed nations inside the U.S. beyond increased militarized repression and mass incarceration. A fundamental transformation of the political and economic system is the only hope for addressing these concerns and providing sustainable solutions.