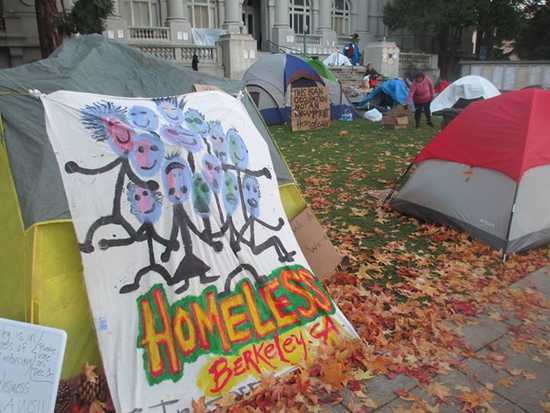 Berkeley, Calif., Nov. 29 — A tent city of more than 60 homeless people has taken over the grounds of Old City Hall in Berkeley, Calif., providing 24-hour shelter from the winter cold and rain and in response to proposed new laws that would criminalize such occupations.

“This is an intentional community, created by homeless people,” says organizer Mike Lee. He adds that the tent city, established on Nov. 16, “is a lot more effective and dignified than anything the city has tried to do. It is a model of self-reliance, self-sufficiency and self-determination.”

“Why can’t Berkeley designate a spot where the homeless can set up tents and live through the winter?” asks Mike Zint, an organizer with “First They Came for the Homeless.” “City officials nationwide are refusing people the ability to care for themselves in the commons. Unsafe, unclean shelters are what’s offered. The truth is, a tent costs $30 and provides shelter, storage, privacy and a certain level of security — and allows healing and peace of mind, so some of the homeless can recover from the abuses they are victims of.

“In two weeks we’ve created a village,” Zint continues. “If the police leave us alone, we will stabilize. At that point all the rules for a responsibly run tent city will be understood and respected. All members must be considered. Animals are a very important thing to the homeless and are part of our community. We have a Navy Corpsman as a medic, security for nighttime, a cook and some very good street artists. It’s true we have a couple of problem people. We will try to work with them. If they won’t follow the community standards — no drugs or alcohol, no aggressive behavior — they will not be allowed to stay.”

On Day 7, the city staged a half-marathon, installing portable toilets for the occasion. The race ended across the street from the homeless occupation. Right away, the city removed all the Porta-potties — leaving only one available all-night public bathroom in the vicinity for the 40 occupiers then at Old City Hall and another 30 or so sleeping in doorways around the park.

The city’s new repressive laws would make it a violation to place personal belongings “covering more than two square feet” on the sidewalk during the day and would force a homeless person with a shopping cart to move it to a different block once every hour in daytime. There’s a whole list of other restrictions they’d have to abide by, with fines or jail time for violations. The homeless tent city occupation at Old City Hall is a direct challenge to these threats from the state.

“You could guess that the powers that be would not allow the homeless to organize themselves, to go from being individually helpless to raising their voices collectively,” said blogger J.P. Massar, writing in the Daily Kos. “And so it was that on Nov. 24 the police came around handing out trespass notices, demanding that those without a place to call their own remove themselves to go … somewhere else. But no one has moved. Buoyed by community support, a sense of righteous anger and the First Amendment, they are staying.”

Massar described some cardboard boxes on a corner in downtown Berkeley. “This is someone’s home. Every night she builds this structure, and every morning takes it down. … The person inside it is a 69-year-old retired nurse. She dedicated her life to helping others. Now Berkeley wants to pass new laws that will hurt people who are barely surviving. Few city officials have understanding or compassion. If they did, Julie would not be living in a self-made cardboard box shack on the sidewalk.”

All this is against the backdrop of Berkeley’s housing crisis, with rents soaring along with evictions and displacement of lower income folk and people of color. A city study found that in 2014 the average rent for a two-bedroom apartment in a new building was $3,434 a month. As Mike Zint says, “You can have two jobs and still not be able to pay the rent.”

On Nov. 30, day 14 of the Old City Hall occupation, a local band consisting of Hammond organ, snare drum and conga players is to hold a concert at the tent city occupation, followed the next day by a march to the City Council meeting led by the Brass Liberation Orchestra to confront and push back the politicians who are hell-bent on criminalizing and disempowering the estimated 1,000 homeless people of Berkeley.