Nov. 20 — Hooded gangs today attacked a large demonstration that was protesting election fraud in the Haitian capital of Port-au-Prince. According to radio reports, a group of about 20 hooded men exited a white pickup truck — license plate 1-00692 — armed with machetes, pipes, hammers and guns, and attacked marchers in the Delmas 95 district while police looked away. One marcher was wounded in the head by a machete, reported the Associated Press. In the Delmas 40 district, a young man in the march was shot and killed by a unit reportedly affiliated with the national police of outgoing President Michel Martelly.

Haitians, determined to thwart what they see as an ongoing “electoral coup d’etat,” have been in the streets almost daily by the tens of thousands since the first round of the presidential election on Oct. 25.

On Nov. 1, a big election protest in the plebeian Bel Air district, led by a Rara musical band, was attacked and two marchers shot dead. Later that day, a third protester was ambushed and killed on the way home.

Huge demonstrations on Nov. 18 were punctuated by police firing into the crowds, wounding several. They had been celebrating the anniversary of Haiti’s defeat of Napoleon’s armies at the Battle of Vertieres in 1803, which paved the way for the island’s independence from France and the abolition of plantation slavery in Haiti.

“Only continuous mobilization through­out the country can win respect for the people’s rights and their votes. When one person tires, their neighbor must take up the fight,” said a communique from Fanmi Lavalas, the party of former President Jean-Bertrand Aristide, who was ousted by a coup in 2004. Fanmi Lavalas had been banned outright since then from running candidates until this year, and was credited with few votes in the disputed election results.

Lavalas presidential candidate Dr. Maryse Narcisse, who is in the streets every day getting teargassed with the protesters, has officially challenged the results with the National Electoral Litigation Bureau. Other major parties have unofficially protested the fraudulent elections, in which President Martelly’s handpicked candidate, a political neophyte, miraculously emerged as the front-runner. A runoff election is due in December.

Many recall the 2010 election, when Martelly was illegally catapulted into the runoff under pressure from then Secretary of State Hillary Clinton and the Organization of American States. Occupying forces of the U.S. and the United Nations have continued their in-your-face interference in the 2015 election as well.

It has been reported that some 10,000 Haitian police and 2,500 U.N. personnel from Minustah, the U.N.’s military mission in Haiti, were deployed during the Oct. 25 voting, and that both Minustah and the U.N. Office for Project Services (UNOPS) were involved in transporting ballots to be tallied in Port-au-Prince.

Now, Deputy Bien-Aimé and two of his colleagues are accusing UNOPS, headed by Sandra Honoré, with direct involvement in the Oct. 25 election fraud. Specifically, they charge UNOPS and its electoral logistics coordinator, the Canadian national, Sylvain Côté, with direct responsibility for taking boxes of ballots actually cast by the people and switching them with boxes of pre-filled-out ballots. Sylvain Coté scurried out of the country the day after the revelations surfaced.

Fifteen well-known Haitian intellectuals were so outraged by the “clear involvement of U.N. agencies in the fraud that marred the elections of October 25” that they wrote an “Open Letter to Sandra Honoré” on Nov. 16, saying, “The whole world is discovering, under pressure from the street … the truth of the biggest electoral fraud operation … for the last 30 years in Haiti.” 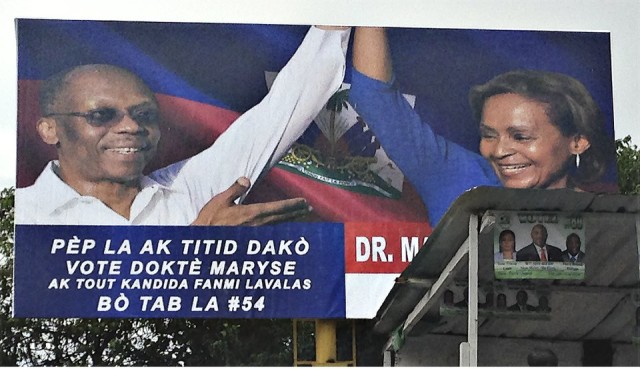 But the main resistance is coming from the street. Many are comparing today’s nonstop mass demonstrations to the uprisings that led to the 1986 collapse of the dictatorship of “Baby Doc” Duvalier. The people are turning the defense of their vote into a focus of mass struggle against the hated neo-Duvalierists in the Haitian government and their U.S., French and Canadian backers.

On Nov. 9, another general strike by transportation workers forced the government to rescind draconian price and fee hikes by effectively shutting down most of the country for half a day. Haiti is defiant and its people determined.

Welsh was a member of a Human Rights and Labor Fact-Finding Delegation to Haiti in October that reported on systematic voter suppression, violence and intimidation in the election process.