“Shut down Stewart!” shouted protesters on Nov. 21 at the gates of the Stewart Detention Center in Lumpkin, Ga. Some 1,400 joined this ninth annual rally and march of the “Expose and Close Stewart” movement, aimed to end the brutal incarceration of undocumented people there.

Mario, a speaker who was 17 years old when held there, said it was “like living in a chicken coop.”

Mary Hooks of “Southerners on New Ground” said, “The status quo profits off our suffering.” She emphasized the solidarity of Black and Brown people, including the undocumented, and the estimated 250,000 undocumented lesbian, gay, bisexual and trans* people in the U.S.

Marchers ranged from residents of the nearby Alterna community in LaGrange, Ga., to a delegation commemorating “disappeared” teacher trainees of Mexico’s Ayotzinapa Rural Teachers’ College and another from Colombia’s “Congreso de los Pueblos.”

A strong labor presence included members of the Fuerza del Valle Workers Center from Austin, Texas, and the Adelante Workers Center of Birmingham, Ala. United Auto Workers members, including those from its Women’s Committee, traveled 16 hours from Michigan to be there.

Along the red-dirt road, “Workers’ Dignity/Dignidad Obrera” of Nashville, Tenn., kept up fiery chants and nonstop drumming. Their huge banner connected the Black and Brown struggles against racism: “From the South in Solidarity with Minneapolis/ #BlackLivesMatter/Justice 4 Jamar.” BLM protesters and allies in Minneapolis occupied a police precinct after cops killed unarmed Jamar Clark.

Eleven protesters broke through the fencing closing off the jail to assert their solidarity with detainees. They were arrested and released after paying $100 fines.

Rally speakers announced hunger strikes and work stoppages going on at nine immigrant detention centers, including by South Asian detainees in the El Paso Processing Center in Texas and the LaSalle facility in Jena, La., women in the T. Don Hutto Residential Center in Texas and men in California’s Adelanto Detention Facility. More than 400,000 undocumented people are jailed in the U.S. annually.

Of the 1,750 men jailed at the Stewart Detention Center, on any given day some detainees are on hunger strikes. When a mass hunger strike began on Labor Day weekend, the Corrections Corporation of America’s “Special Operations Response Team” in riot gear used rubber bullets and pepper spray to brutally suppress it.

The Corrections Corporation of America — the U.S.’s largest private, for-profit prison company — runs Stewart, and is paid $60.50 per day per detainee. Longer detentions mean more profits, but exploited detainees are paid as little as $1 a day for their work assignments.

At a Nov. 20 #ShutDownStewart work­shop, two Georgia women whose partners and spouses had been Stewart detainees unmasked the racist policing behind their incarceration. Cops told one woman’s spouse, stopped for a broken tail light, “We’re going to send you back where you came from,” as they spit out a racist term. Persecuted for being Latino, he was jailed and later deported — for not having a driver’s license, which undocumented people cannot legally obtain in Georgia.

An undocumented mother whose children are U.S. citizens described immigration police appearing at her house, pursuing someone with her spouse’s last name. When his documents proved he was not that man, an agent said, “I don’t care,” and arrested him anyway. He was deported — and, “The children are crying for their father.”

The Georgia Peace and Justice Coalition sponsored the 200-person strong workshop, where coordinator Dianne Mathiowetz, a Workers World Party activist, explained, “Capitalism is a global system where the profit motive is driving the policies, not just so-called ignorant politicians.” The root cause of the U.S. “immigration crisis” is the capitalists’ need to control markets and exploit people’s labor through military intervention in Latin America and elsewhere, she said.

The workshop and Stewart protest were part of the “School of the Americas Watch” annual vigil at the U.S. Army’s Fort Benning, outside Columbus, Ga. Event speakers linked SOA training of other countries’ military officers with the subsequent terror unleashed in these countries, from which thousands have fled, many seeking asylum in the U.S.

A Guatemalan banner at the Stewart march made that point. Staring out from the banner were the faces of some of the 45,000 people killed by Guatemala’s repressive forces. Most military officials in that country’s dictators’ cabinets, including that of Gen. Efraín Ríos Montt, have been SOA graduates.

Protesters shouted: “Free all undocumented people! No borders in the workers’ struggle!” 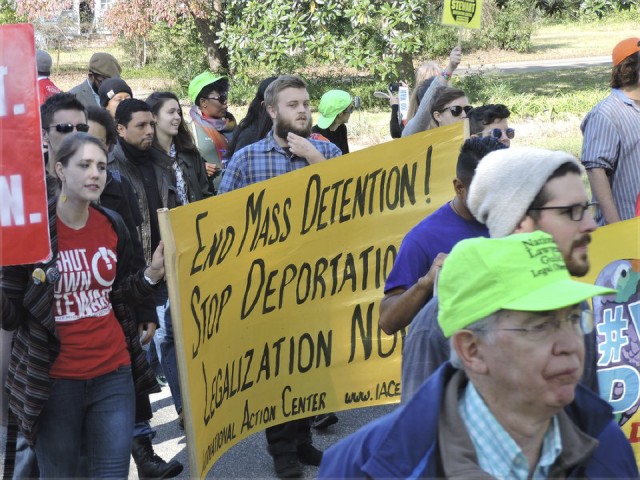 As the U.S., France and other imperialists feed the fires of war, using the Paris deaths as fuel, the School of the Americas Watch marshalled a national anti-U.S. military intervention protest of almost 1,500 people at the gates of Ft. Benning on Nov. 22.

SOA Watch is in its 25th year of actions to close the U.S. Army School of the Americas, a site for training South and Central American militaries in techniques to repress their own people.

This year’s action connected U.S. militarism, its massive expenditures and consequences, to many other issues. These included immigrant detention, mass incarceration and exploitation of prison labor, racist police terror and the Black Lives Matter movement, Israeli oppression of Palestinians, and U.S. labor struggles.

The rally’s end featured a litany of “¡No más! No more! We will end these dirty wars!” The chants alternated with information that added up to a primer on the impact of U.S. imperialism. Speakers chanted the names of those tortured, disappeared and murdered through U.S. military and CIA intervention, as the crowd responded “¡Presente!” and placed the names on the fence around the fort.

Father Roy Bourgeois, a former Catholic priest who led in founding SOA Watch, said to the rally, “The time has come in our movement to make the struggle of our migrant brothers and sisters our own.” SOA Watch will move next year to the Texas border to further stress the connection between U.S. militarism and immigrant rights.