The following is a greeting of solidarity with Native peoples on the 46th annual National Day of Mourning from Workers World Party presidential and vice presidential campaign candidates Monica Moorehead and Lamont Lilly. 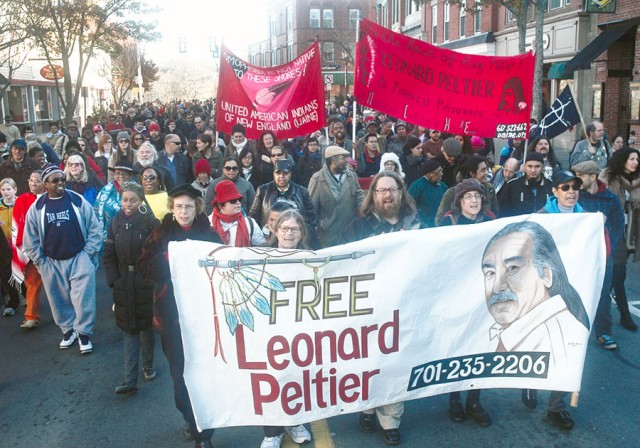 This year’s commemoration of the National Day of Mourning on Nov. 26 in Plymouth, Mass., will again honor Native political prisoner Leonard Peltier, a fighter for the rights of Indigenous and other oppressed peoples. The ailing 71-year-old hero has been unjustly imprisoned for 39 years, and is now in Florida far from his nation, the Turtle Mountain Band in North Dakota.

The so-called “Thanksgiving” holiday starkly recalls the centuries of atrocities committed against Native peoples, first by European colonizers and then by U.S. administrations. Indigenous lands stolen, cultures and languages under siege, bigotry, injustice and murderous violence aimed at this country’s original inhabitants are the real U.S. history, not the myths.

Our campaign is in solidarity with Native communities in their ongoing struggles in the U.S. and throughout the Americas for political, economic and social rights. We recognize the right to self-determination of Indigenous people everywhere and support their efforts for decolonization and sovereignty.

Racist discrimination, oppression and corporate exploitation continue. In the U.S., these communities suffer from a racist criminal justice system, along with their African-American and Latino/a sisters and brothers. Indigenous women and men are incarcerated at much higher rates than their white counterparts. While they account for 1 percent of the population, they make up nearly 2 percent of those killed by police.

The economic crisis has exacerbated Native workers’ unemployment; high jobless rates continue. Accessible jobs often have few to no benefits and low wages. Many Indigenous youth have no future; one-half drop out of high school. These young people have the highest suicide rate of any U.S. population group.

At least one-third of Native people are impoverished. Despite food stamps, one in four adults and one in three children still lack nutritious food; one in 10 households faces outright hunger. Governmental cuts of essential benefits have devastated these communities. Refusal to expand Medicaid by 20 conservative state governments denies health care to many Indigenous families.

The U.S. government, however, allots trillions of dollars to wage wars, occupy lands abroad and bail out Wall Street corporations and big banks. Our campaign demands that Congress put human needs first and ensure jobs at livable wages and vital social programs for all Indigenous, oppressed and low-income communities.

We applaud Native peoples worldwide who boldly resist capitalists’ ruthless pillaging of the earth in search of oil, gas, minerals — and super-profits. They oppose “climate injustice” — whereby poor countries and peoples are harmed by climate-made disasters caused by carbon emissions, fracking, hazardous pipelines and environmental racism. Indigenous peoples’ demands should be met for reparations from corporate polluters for ecological damage!

Our campaign congratulates heroic Native communities who stood strong and won a major victory in stopping the Keystone XL pipeline. For seven years, these activists, with their non-Native allies, put themselves on the line in this life-and-death struggle against environmental genocide. They pressured the Obama administration into vetoing this project, which would have transported Canadian tar sands oil through tribal lands to Texas refineries, escalating carbon emissions and contaminating groundwater. Yet the struggle goes on against corporate extraction of fossil fuels from the earth — and more pipelines.

We stand with the movement of Native nations and individuals and their supporters who have been protesting racist names of sports teams and mascots. Their righteous struggle has successfully turned the tide against team owners, as more people deplore this bigotry and demand the abolition of these insulting names.

The Moorehead-Lilly campaign raises high the banner of solidarity with all Indigenous peoples on this National Day of Mourning. We join with millions of people worldwide in loudly proclaiming, “Free Leonard Peltier!” We stand with all Native peoples who are fighting back against capitalism’s escalating destruction of the planet.