The South African government is facing three serious economic issues. Parliamentary workers have been on strike for higher wages since Nov. 9, preventing routine legislative work. The current drought, which is likely to cut agricultural production, has caused periodic power shortages and outages, cutting revenues to the state-owned utility. In addition, President Obama’s administration is demanding changes in Pretoria’s trade policy that endanger the country’s sovereignty. 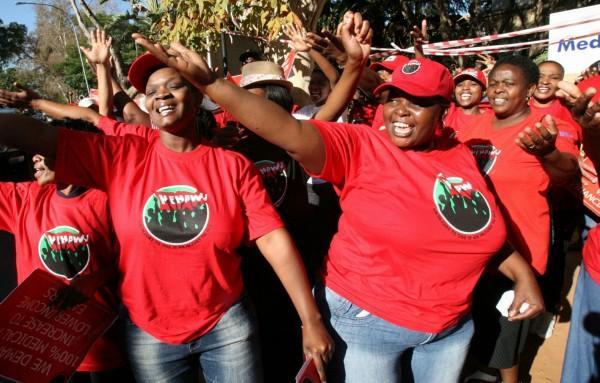 Members of the National Education, Health and Allied Workers’ Union are defying an injunction to end their strike. NEHAWU is an affiliate of the Congress of South African Trade Unions. The government claims the strike is illegal because the workers perform “essential services.”

Parliamentary workers clean, cater and oversee the efficient operations of the legislative committee meetings and control access at the visitors’ center. Since Nov. 9, workers holding strike actions inside the Parliament building in Cape Town have prevented normal legislative work and forced cancellation of some committee meetings.

On Nov. 16, NEHAWU’s leaders reported that workers’ salaries were withheld due to strike participation. Negotiations were halted, and NEHAWU said they would not resume until the workers’ pay was reinstated. COSATU and its unions have sent many messages of support, as have NEHAWU’s regional leaders and student and youth organizations.

A settlement earlier in the year involving a 9 percent pay increase did not include performance bonuses, which is a major strike issue. (News24)

At a rally on Nov. 16, NEHAWU said its demands were non-negotiable. The newly elected NEHAWU Ikapa South Regional Secretary Baxolise Mali told the crowd, “We are going to have a national shutdown … we are very clear. We are not fighting the [government] alliance, we are fighting the employer.”

On Nov. 11 police used stun grenades in clashes with the union. Law-enforcement officers wearing full body armor carried away NEHAWU members. For the second time in a month, Cape Town’s Parliament building was the scene of battles. The first involved students in October.

A parliamentary spokesperson claimed that the union’s demands are “unbudgeted for and unaffordable for Parliament given the shoestring budget it is managing.” (News24, Nov. 16)

At the G20 Summit held in Turkey, South African Finance Minister Nhlanhla Nene said the drought in the subcontinent, as Africa’s southern hemisphere enters summer, could impact agricultural production and consequently prompt a rise in prices for food and other consumer goods, reduce revenues and increase unemployment.

Problems with the state-owned Eskom utility agency have also mounted over the last several months. Periodic power shortages and outages have compelled the government to address the fall in consumer revenues from power generation.

The government response to the Eskom crisis includes the conversion of subordinated debt into equity, which Nene says has eased funding pressure. The utility agency has still not tapped into the roughly 50 billion rand (approximately $3.5 billion) of financial banking guaranteed by the government.

The Africa Growth and Opportunities Act was established during the latter period of Bill Clinton’s presidency. It is ostensibly designed to foster the export of capital to the continent while providing market access for products from both the U.S. and African nation-states.

President Barack Obama’s administration is demanding changes in Pretoria’s trade policy, which the White House says hinders U.S. access to domestic markets. The U.S. threatens to remove key agricultural sectors from the agreements with South Africa, which could cause further damage to the economy. Negotiations continue toward a Jan. 1 deadline.

A Nov. 9 statement from the South African Communist Party supports the ANC government’s position in the negotiations with the U.S. The SACP says that despite its commendable declarations, “in reality, AGOA is imperialist both in terms of its content and strategic goal disguised under the fetishist illusion of ‘free market.’ Its extraterritorial imperialist content is now being aggressively pushed by the U.S. against South Africa.”

The SACP emphasizes that “to allow the U.S. to prohibit ownership of economic assets by the state in our country is to allow it to usurp our constitutional right to democratic national sovereignty. This will be tantamount to handing over to U.S. imperialism our right to determine our own development trajectory and decide policies to achieve it.”

The party also noted that “South Africa’s independence must be safeguarded in the interest of the completion of our struggle for national liberation and social emancipation. Our democratic national independence and public property rights — the right to collective ownership of productive assets including through the state — are crucial to the success of our second, more radical phase of transformation!”

The Obama administration’s stance illustrates the real agenda behind AGOA and the overall foreign policy imperatives of the White House. South Africa has the inalienable right to determine its own economic program without the interference of Washington and Wall Street.