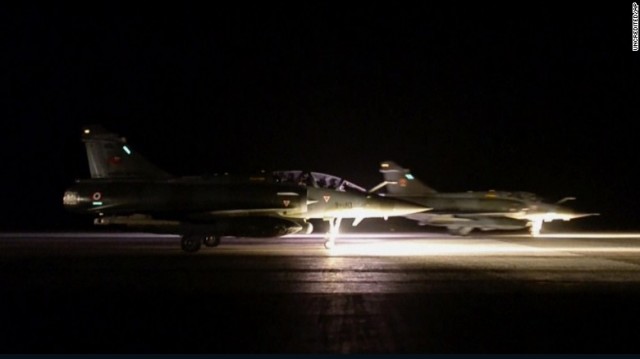 The news from France is grim. The immediate response of the French government to the terrible attacks in Paris on Nov. 13, which killed 129 people and wounded hundreds more, was to send planes to bomb Raqqa in Syria, a city of 200,000 people.

The group “Raqqa Is Being Slaughtered Silently” reported that on Nov. 15 France bombed a soccer stadium, hospital, museum and government building, in addition to what the French military claimed were ISIS targets. The group has no reason to exaggerate. They have also been reporting brutalities by ISIS.

Inside France, the government of President François Hollande has declared a state of emergency, which it wants to extend for three months and which suspends many civil liberties. Hollande is also trying to push through permanent changes to the French Constitution that would increase the state’s power of surveillance and strip convicted “terrorists” of citizenship.

In Britain and the U.S., “national security” officials and politicians are using the attacks in Paris to push their own agendas for more funds, more restrictions on immigrants and control over all digital communications.

Marine Le Pen, head of France’s neofascist National Front Party, which is violently anti-immigrant and has called for closing the borders, congratulated President Hollande on his actions in response to the attacks. This should alert any worker, any progressive, anti-racist person to the dangers that lie ahead.

Think back to the 9/11 attacks in the United States in 2001. Did the response of the U.S. government end violence — or did the government use the attacks to enormously increase its violence against countries in the Middle East?

The Bush administration quickly invaded Afghanistan and in early 2003 launched “Shock and Awe,” massively bombing Baghdad and invaded Iraq. Iraq had nothing to do with the destruction of the World Trade Center. Since then there has been non-stop bombing of many countries in the region by the U.S., France and other NATO imperialist powers and the destruction of Libya and Syria.

The more acts of war by these rich, heavily armed powers, the more deaths and terrible injuries, the more survivors without homes, families or a way to make a living. Millions have become refugees, trying to flee the wars that seem to follow them from country to country. Hundreds of thousands of men, women and their children have braved great perils to get to Europe — and now are being told the borders are closing and they are all suspected of being “terrorists.”

How will any of this promote peace in the region? How could it possibly stabilize these ravaged countries so that the millions who have been displaced by the wars can return to their homes?

The outraged response by Western governments to the Paris attacks has been infinitely greater than any regrets they have voiced over the catastrophes they have inflicted on the peoples of the region for decades.

Ratcheting up the “security state” and criminalizing immigrants can only lay the basis for more war, more suffering and more extreme acts. There was no ISIS or Nusrah Front before the imperialists began their offensive to turn back the clock and get rid of the nationalist regimes that came out of anti-colonial uprisings after World War II.

The stronger the movements against war, racism and imperialism become, here in the U.S. and in Europe, the more chance to build true solidarity among all peoples — which is the only answer to the terrible situation that now exists.

No bashing of Muslims and other immigrants!