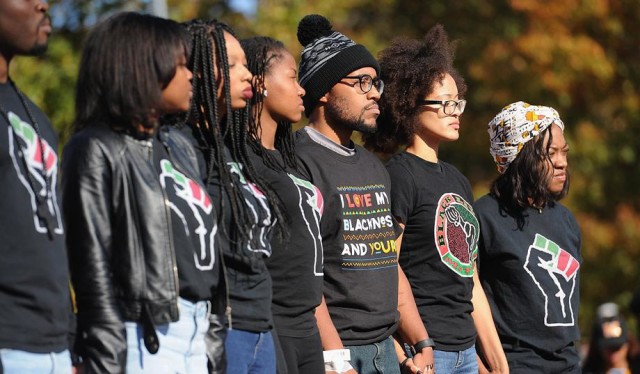 Student protests against racism and other bigotries are being lambasted across the U.S. as an assault on “free speech.”

Seeing marches led by young women of color, white male students have shouted, “I’m for freedom of speech!” On one campus, opponents of this new movement put up signs “In memoriam of the true victim of the Missouri Protests: Free Speech” along with “All Lives Matter” posters.

Those signs reveal the foundation of “free speech” criticism: racism. It’s a tool the capitalist ruling class uses as it propagandizes, organizes and legislates to keep all oppressed people — and emphatically people of color — silent and powerless.

The recent wave of protests at U.S. colleges and universities is not a struggle over “speech.” It is a struggle by students seeking to liberate their own educational process — including from devastating student loan debt that generates huge profits for lending agencies.

This is a struggle to create school environments where young people of color, women, people with disabilities, and lesbian, gay, bisexual, trans* and queer people can learn without being terrorized, threatened and slandered by administrators, faculty, campus police and other students. (Trans* is currently used with an asterisk to indicate the spectrum of different sexes and genders of people who do not conform to the either/or of male/female or masculine/feminine.)

Women are technically “protected” by U.S. law from job environments where co-workers hang crudely sexist posters or use foul anti-woman language. But students are reporting daily at their schools the most vile, racist, sexist and anti-LGBT*Q language, including death threats. Plus they are targeted and sometimes beaten by campus cops.

The struggle over who gets to speak and what they say is not an abstract discussion. The struggle is not about how students learn “to tolerate opposing points of view.”

The student protests are a struggle about who gets to live and how.

In the U.S. where corporations are legally considered “people” and spend billions to make sure their “free speech” is broadcast in every venue — from major media to the White House — oppressed people have to struggle every day not just to be heard, but to survive racist, sexist, homophobic, anti-disabled attacks.

Oppressed students struggle to find a way into a future where they are not merely human robots in corporate assembly lines. They are speaking out and fighting for a better world.

This world cannot be built using narrow legalities put in place by a bourgeois democratic revolution in the 1700s that framed “rights” as possessed only by white, propertied men. That way includes even now the notion of who can speak and who is considered “truthful.”

The students’ speech, their truth, can be heard as one more break in the old oppressive system. And their struggle also points toward socialist revolution.

Because when workers and oppressed people speak our truths, we are communicating to each other the information we need to organize and liberate ourselves.

Listen to the students. Fight for their right to speak and organize!