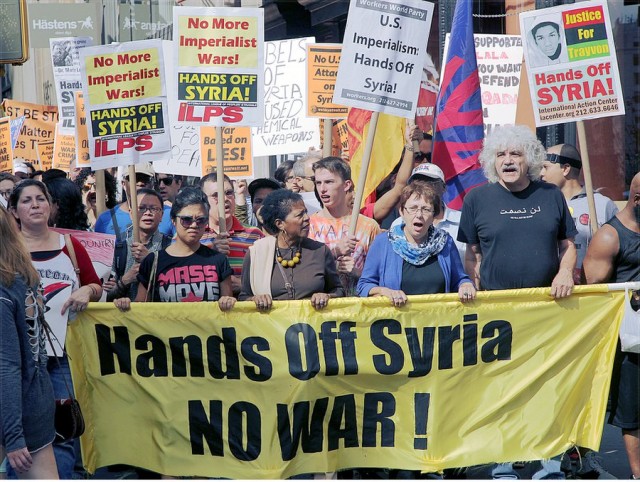 Nov. 14 — Just counting recent catastrophes, Workers World mourns the tragic loss of 30 people killed by U.S. airstrikes on a charity hospital in Afghanistan; the 224 passengers and crew lost on a Russian plane that exploded over Egypt; the 102 lives cut short by an attack on a Peace Rally in Ankara, Turkey; the 34 killed in Beirut; the many, many families blasted by U.S. drone attacks on wedding parties across West Asia and Africa, and the thousands who have died trying to cross the Mediterranean as they flee war and the loss of lives and homes.

We mourn the loss of hundreds of African-American lives to racist police in the United States.

And we mourn the killing of at least 120 mostly young people in Paris on the night of Nov. 13-14.

This latest massacre has produced the greatest threats — from the U.S., France and NATO. Even more war and destruction perpetrated by these highly militarized powers is the greatest threat to workers and peoples around the world, including those in the new civil rights movement inside the United States.

Who is ultimately responsible for what happened in Paris, what new aggression is being planned right now, and how can we counter it?

The media report that the French regime blames the Islamic State for the killings and that the I.S. has claimed responsibility. That story will dominate. But from beginning to end, it is U.S., French, British and other NATO imperialist powers and their client regimes in Israel and Saudi Arabia that are ultimately responsible for creating the unbearable conditions that led to these attacks.

The ongoing U.S.-NATO wars across Western Asia and North Africa have destroyed that region’s stable states and societies, killed millions of people and uprooted tens of millions from their homes. As they wage constant warfare, leaving the people in turmoil and misery, the imperialists have deliberately stirred up religious and national antagonisms and also driven hundreds of thousands to seek asylum in Europe.

There are three obvious threats following the Paris attack:

The first is that the rulers of France, the U.S. and other NATO powers will use the attack as a pretext to step up their already dangerous military intervention in Syria. This could open up a regional war involving Iran and Russia.

The second is that the racists will heat up Islamophobia and the hatred of all foreigners to bolster their violent campaigns against migrants, in Europe against Africans and West Asians, in the U.S. against Latin Americans.

The third, within the U.S., is that the cops challenged by the Black Lives Matter movement will use the Paris attacks to excuse their ongoing war against Black and Brown people. “Homeland security” and the Wall Street interests it serves will try to expand surveillance and repression against protest movements.

Those who want to combat these threats must use their own and social media to expose the crimes of the U.S. and French ruling classes. We must also stand in solidarity with the migrants on all continents; they are our fellow workers and oppressed peoples.

We must stand in solidarity with the movements to win rights and justice as they resist the pressure of the rich and powerful, trumpeted through their bought media, to retreat from struggle.

It is the super-rich who have demanded the wars against Syria, Libya, Afghanistan and Iraq. Don’t let them use the horrors they have created as an excuse to drag us into ever more destructive conflicts.

No to U.S., French, NATO, Saudi or Israeli intervention in Syria, Iraq, Yemen or the rest of West Asia!

Defend the rights of migrants on all continents!

Solidarity of all workers and oppressed against imperialism and reaction!