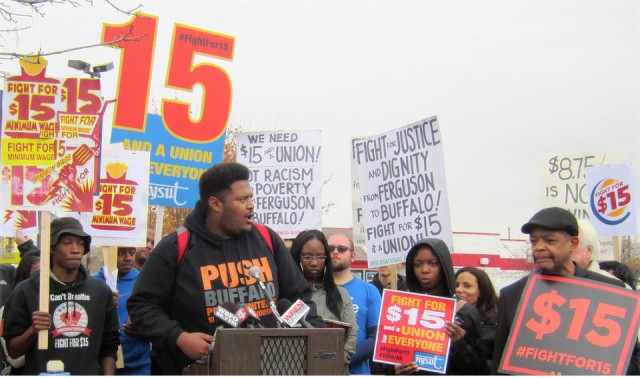 A wave of strikes and protests by low-wage workers fighting for a $15 minimum hourly wage and a union swept the U.S. on Nov. 10, making it the largest day of action ever as this movement enters its third year.

From Boston to Los Angeles; Seattle to Milwaukee; New York to Durham, N.C.; and Philadelphia to Atlanta, nearly every major city saw strikes at fast food restaurants during the work day and larger demonstrations in the evening. In total, some 500 cities counted strikes and other actions throughout the day.

Fast food, home health care, child care, airport, retail workers and those from many other sectors took to the streets to demand $15 and a union. What began in November 2012 when a group of fast food workers in New York City walked off the job has since sparked a national movement that has become a rallying cry for workers everywhere.

An encouraging development with the latest round of strikes is the growing alliance among the Black Lives Matter movement, the immigrant rights movement, and the fight for $15 and a union. In many cities, contingents were organized by Black Lives Matter and immigrant rights activists, and many speakers raised the connection between the low-wage workers’ struggle and the fight against racism and police terror.

Most of the Nov. 10 demonstrations ended with protests outside city halls and calls for the elected politicians to take action around the demands for $15 and a union.

The courageous actions by low-wage workers, who have gone on strike many times in the last several years and have helped breathe new life into the U.S. labor movement, clearly demonstrate their commitment to stay the course and see this struggle through. These workers, by broadening relationships with the Black Lives Matter movement and others, are showing the potential for the movement to expand and deepen.

A key question for this movement — an upsurge marked by militancy and the leadership of Black and Latino/a workers, along with many women and young workers — is whether it will maintain its independence in the face of the looming 2016 presidential elections. The elections tend to pull popular movements away from needed strikes and street actions into the framework set by the two major political parties, both of which represent the interests of the big capitalists and bankers.

It will be up to the workers on the front lines of this struggle and the broader movement that has mobilized to support them to maintain an independent course.

Following are reports from just a few of the many areas where actions were held.

Hundreds of low-wage workers and their supporters rallied and demonstrated through downtown Detroit. Among them were fast food, retail, home health care and auto parts workers, many of whom had participated in the nationwide strike. The Service Employees union was the principal organizer, with other unions and AFL-CIO affiliates represented. Workers held aloft a papier-mâché model of boxer Joe Louis’ fist clenching $5 and $10 bills. The fist won a mock battle with a Ronald McDonald puppet.

Members of the North Carolina Public Service Workers rallied at Kinston City Hall, calling for at least $15 per hour, union rights and recognition that “Black Workers’ Lives Matter.” A large majority of Health and Human Services employees make less than $15, even those who have worked for the state for over 20 years. “You wanna know why we are always coming to work tired?” asked Robbin Clarke-Hines, a union member at Caswell Center. “It’s because we are forced to work two jobs to make ends meet.”

The rally also demanded the internationally recognized right for public workers to collectively bargain, which is banned in this state, and called for an end to police killings.

In the rural eastern part of the state, fast food workers, adjunct professors at nearby universities, public workers and the Pitt County Coalition Against Racism picketed and rallied at Greenville City Hall. Workers from the Rocky Mount Engine Plant and other members of the Electrical Workers Local 150 rallied at Rocky Mount City Hall. The city of Greensboro recently committed to raise all municipal workers’ salaries to $15 per hour over the next few years. This is a growing trend across the state, the U.S. South and the entire country. Birmingham, Ala., passed a similar ordinance, following on the heels of Seattle; Los Angeles; Oakland, Calif.; New York; and many other areas.

The Coalition for Economic Justice organized protests at McDonald’s and at City Hall, where workers spoke about long hours, low pay and unfair working conditions. Chanting, “What do we want? $15 an hour! When do we want it? Now! And if we don’t get it? Shut it down!” workers from McDonald’s, Tim Horton’s, Taco Bell and Wendy’s joined home care, child care and other underpaid workers at the rallies, along with supporters from many unions and progressive organizations.

Several hundred workers and supporters marched at 6 a.m. from Cadman Plaza to several downtown McDonald’s. They wore sweatshirts with not only their wage demands but also the “I can’t breathe” slogan signaling condemnation of the police killing of Black Staten Islander Eric Garner. Speakers emphasized the demand for $15 and a union as well as for immigrant rights and support for the Black Lives Matter struggle. Contingents included carwash and retail workers, Make the Road, NY Communities for Change and the Peoples’ Power Assembly.

Some 200 fast food, home care, airport, nursing home and other workers rallied and marched for a $15 minimum wage and a union despite a steady rain. The majority were young and Black. They drew many cheers from onlookers as they walked in the street from City Hall to a busy McDonald’s store.

Activists from Black Lives Matter, Fight for 15 Wisconsin, immigrant rights and anti-war protesters, the Nation of Islam, unions such as Amalgamated Transit Union Local 998 and the Teachers Education Association, and others united on Nov. 10 to take the streets to confront the Republican Party “debate” in Milwaukee. “The whole damn system is guilty as hell. We need to stand on their necks,” said Nate Hamilton, the brother of Dontre Hamilton, at a City Hall rally before marching. Dontre Hamilton was shot 14 times by Milwaukee cop Christopher Manney. That morning the Hamilton family learned that no federal charges would be brought against the cop for Dontre Hamilton’s death. For hours thousands faced off against hundreds of cops, chanting “El pueblo, unido, jamás será vencido!” and “I. Believe. That we. Will win!.”  They demanded $15 and a union and an end to police terror.

Other demands included an end to the U.S.-Israeli war on Palestine and other Arab and Muslim peoples, stop the war on migrants, money for jobs, solidarity with Cuba, socialism not capitalism, and cancellation of student debt. Due to the militant struggles right outside the so-called Republican Party debate, the first question asked of the candidates was if they supported 15 and a union. They all said no, which didn’t surprise or deter the people.