Four participants in the 26th Friend­shipment Caravan shared their ­experiences traveling to Cuba in July at a New York City meeting at Riverside Church on Oct. 22. A major focus of the meeting urged action to block the current attack by the Internal Revenue Service on the Interreligious Foundation for Community Organization. The IRS said it plans to revoke IFCO’s tax exempt status, jeopardizing the oldest African-American foundation. 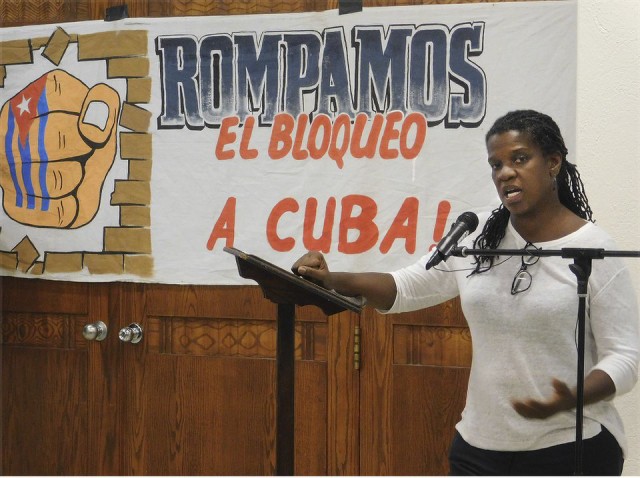 Behind the headlines about normalized U.S./Cuba diplomatic relations, Gail Walker, IFCO/Pastors for Peace executive director, asserted the attack on IFCO shows the hypocrisy of the Obama administration. It is calling on Congress to end the blockade while using the IRS as a tool to punish IFCO for its humanitarian caravans to Cuba, which the foundation has organized since 1991.

International solidarity like ­IFCO’s built the stage for the announcement last Dec. 17 by President Raul Castro and President Barack Obama on new U.S.-Cuba relations and the release of the last three Cuban security agents — known as the Cuban 5 — who were held in U.S. prisons since 1998.

Walker urged people to “go the the website and demand the attacks on IFCO be stopped!” (tinyurl.com/qg4sxo7) In addition to background information and an online petition, the IFCO/Pastors for Peace website also lists phone and fax numbers, as well as email addresses for IRS Commissioner John Koskinen and Secretary of Treasury Jacob Lew, so people can express their support for IFCO directly and demand an end to the IRS attacks.

Also at the Oct. 22 meeting, IFCO Board member Ninaj Raoul announced IFCO’s endorsement of the International Campaign to End Apartheid in the Dominican Republic.