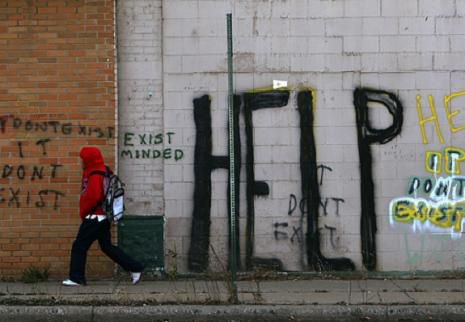 Hidden behind the smoke screen of Temporary Assistance to Needy Families (TANF) and food stamps, now called the Supplemental Nutritional Assistance Program (SNAP), four million people in the U.S. — three million of whom are children — live for months-at-a-time on a cash income of less than $2 a day.

That $2 might buy a quart of milk, but won’t buy a gallon of gas, even though the price of gasoline is plunging.  If you saved your whole income for three days, you would get 50 cents back on a round trip on New York’s subways.

SNAP and local food pantries might keep starvation at bay but can’t be used to buy necessities like toilet paper, soap, socks or underwear.  Selling your SNAP benefits — a common practice among the extremely poor — is a serious federal felony.

In their book, “$2 a day: Living on Almost Nothing in America,” Kathryn Edin and H. Luke Shaefer not only document the statistics of rising extreme poverty in the U.S., using data from the Census Bureau’s Survey of Income and Program Participation (SIPP), but also present the human suffering that lies behind the statistics.

While $2 a day is the World Bank’s metric for extreme poverty, it has a different impact in the U.S., a very wealthy country, versus an extremely poor country like Haiti.  Over 50 percent of people in Haiti live below the $2 a day limit.  Their social safety net is much more meager and their income must cover all their needs — rent, food, basic necessities.

In the U.S. there are food pantries; public housing and homeless shelters; libraries with after-school programs, books and Internet access; hospitals with emergency rooms; and free breakfast and lunch programs in schools.  Often it is possible to get a few months at a minimum wage (or sub-minimum wage) position, which brings you out of extreme poverty.

Using SIPP household figures, the authors calculate that the number of families in $2-a-day poverty doubled from 1996 to 2011, the 15 years since Bill Clinton abolished cash welfare on Aug. 22, 1996.

The Earned Income Tax Credit and TANF were supposed to replace welfare.  But the EITC is available only to people with a formal job and comes in a lump sum after filing taxes. TANF is a block grant distributed by the states, but states often discourage or hinder applications so they can use the money elsewhere.

The authors went beyond a statistical analysis. They did field research among $2-a-day families in a wide variety of urban and rural communities throughout the U.S. This approach adds a deep human depth to the book by revealing the human suffering and striving that lie behind the SIPP statistics.

Most individuals they interacted with received no cash welfare from TANF or other programs because state bureaucracies blocked their disbursement. Lacking the cash needed to pay their bills or buy non-food necessities, they were forced into the illegal, shadow economy.

They sold their children’s or grandchildren’s social security numbers or went through a variety of schemes to sell their SNAP allowances, which meant they and their families went hungry at the end of the month.

Edin described the reaction of people forced into illegality to the Atlantic magazine. (September 2015)  “People are really making a hard choice — parents are making really hard choices — and they’re doing things that they themselves don’t think are moral. But of course the ultimate morality is providing.”

Another desperate way of getting cash is to sell your blood plasma, which is debilitating but can be done legally twice a week.  Clinics accepting plasma are common in large cities.

Many of the $2-a-day poor want jobs.  The ones they get tend to be very unstable, where the hours fluctuate and it is easy to get fired.  When you depend on SNAP to eat and your weekly hours range from 5 to 30 and back, you have a dilemma. If you report the increase to 30 hours, SNAP benefits are cut. If you drop back to 5, it takes the government a long, and for you, hungry time to adjust to the lower level.

Erin and Schaefer do not propose returning to cash welfare as a solution to extreme poverty.  Instead they propose jobs — steady jobs paying at least $12 or $13 an hour.  This approximates the $15 an hour demanded by fast food workers, but the authors don’t mention unions in their book, a weakness if you’re looking for an improvement.

Having unions would have solved a number of the painful situations.  One of their correspondents was fired — after years of exceptional service — for coming up $10 short in her cash draw;  another was fired after getting tired of doing 60 to 70 hours a week and asking for relief.