Angry workers stormed Air France headquarters near Paris on Oct. 5. Top company executives were meeting to discuss the company’s plan to lay off 2,900 workers “for the implementation of productivity measures leading to a lasting return to profitability.”

The workers chased two executives out of the room and over a fence. They tore the shirt right off of Executive Vice President Xavier Broseta and shredded the shirt and jacket of Air France’s director of Human Resources, Pierre Pissonnier. Pictures of a half-naked Air France executive climbing a high fence to escape the incensed workers circled the globe on the Internet. 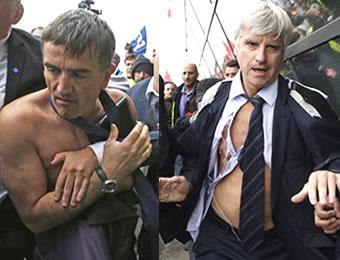 Workers beat up Air France bosses who had announced the layof of 2,900. Oct. 5.

Air France, which is partly owned by the French government, had announced plans to lay off 1,700 ground staff, 900 flight attendants and 300 cockpit crew members. Before that, management had tried to get the pilots to work longer hours for the same pay, which, of course, would have put both passengers and crew at greater risk. The pilots had refused.

In this era of capitalist austerity, direct action like this by French workers has become more common. Canadian Broadcasting commented, “Although Monday’s scuffle was unusually violent, labor relations in France are commonly testy, with unions sometimes even resorting to holding managers hostage — or “boss-napping” — to make a point.” (cbc.ca, Oct. 5)

Since the dawn of capitalist industrialization, the fierce exploitation, harsh working conditions, dangers and layoffs have sparked angry responses from exhausted workers. The word “sabotage” comes from France, where workers jammed shoes, called “sabots” in French, in gears to stop factory machines for a while so the workers could catch a breath.

What is the response of the French government to the airline workers’ plight and their stirring action? After all, French President François Hollande heads a party that still calls itself socialist. But he showed his true pro-capitalist colors, condemning the “violence” and warning it could “have consequences for the image and attractiveness” of the country to investors. Transport Secretary Alain Vidalies condemned the workers’ action, tweeting that it was “unacceptable and must be punished.”

The French people, on the other hand, feel quite differently. In a poll of 1,000 people by the Sud Ouest Dimanche (South West Sunday) newspaper, 54 percent said they “understood” the workers’ anger. Only 38 percent condemned the “violence.“ (yahoo.com, Oct. 10)

Compare this French government response to workers’ direct action to the governmental response to an incident that took place in China, where the government, the product of a great revolution, is run by the Communist Party. Since 1978, it has allowed capitalist enterprises to function in China, but the government is committed to building socialism and has developed a strong, state-owned infrastructure. Under its planned development, 500 million people have been raised up out of extreme poverty over the last three decades.

This year, Workers World wrote, in an article titled “China, rising wages and worker militancy,” about how Chinese steelworkers at a state-owned mill had responded to announced layoffs in 2009: “After a mass meeting addressed by the executive of the steel company that was going to take over their plant (and make huge job cuts), the workers rebelled and beat him to death.” (workers.org, July 21)

Before this happened, local officials had gone along with a bid to privatize the plant. But that changed when the workers rose up. The Chinese government stepped in. “The privatization was halted. No arrests, no prosecutions. Isn’t that the kind of power that workers should have everywhere?” asked Workers World.

The French workers’ action is not an isolated incident. It is part of a growing, militant, anti-austerity movement that is sweeping Europe and indeed the rest of the globe.

The more that capitalism decays, the more such struggles will be transformed into a revolutionary movement to actually overturn capitalism and install a socialist system, run by the working class and driven, not by profits for a few, but to meet the needs of all the people.