Oct. 5 — Two days after a U.S. airstrike targeted and destroyed a hospital in Kunduz, Afghanistan, 10 patients and 12 health care providers are reported killed. Doctors Without Borders (MSF), who ran the hospital, has decided to leave Kunduz. 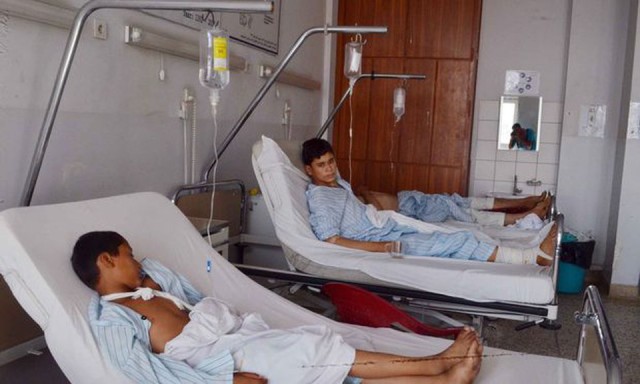 Afghan children bombed by the Pentagon.

U.S. military authorities keep changing their story of why they hit the hospital, leaving little doubt that the building was hit on purpose, probably in order to close the hospital and drive out the MSF. They also conveyed that purpose by using the term, “collateral damage,” to refer to the civilians killed in the strike. That term was first used extensively by NATO press officer Jamie Shea in the spring of 1999 as a euphemism to describe the civilian targets of NATO’s 78-day bombing campaign against Yugoslavia.

The U.S. command first claimed that a firefight was going on with Taliban fighters and the U.S. forces called in airstrikes for support. This lie was later abandoned. Afghan puppet forces claimed the Taliban used the hospital as a staging area. Doctors Without Borders denied this latter claim and called the bombing “a war crime.”

“MSF is disgusted by the recent statements coming from some Afghanistan government authorities justifying the attack on its hospital in Kunduz. These statements imply that Afghan and U.S. forces working together decided to raze to the ground a fully functioning hospital with more than 180 staff and patients inside because they claim that members of the Taliban were present.

“This amounts to an admission of a war crime. This utterly contradicts the initial attempts of the U.S. government to minimize the attack as ‘collateral damage.’” (doctorswithoutborders.org, Oct. 4)

It wouldn’t be the first U.S. war crime in Afghanistan. Since 1979, the U.S. has carried out multiple war crimes in that Central Asian country, atrocities that created the disastrous situation the Afghan people face today.

In 1979, the U.S. intervened against a progressive secular Afghan government that had overthrown the Afghan monarchy and which had friendly relations with the Soviet Union. The U.S., Pakistan, Saudi Arabia and the Gulf Emirates financed reactionary religious forces — including al-Qaida and the Taliban — that finally wore down the Soviet forces friendly to the government after nearly a decade and, in 1992, drove out the secular government.

After a few years of fighting among the various reactionary forces in Afghanistan, the Taliban, with heavy support from the Pakistani military intelligence known as the ISI, seized power in Kabul.

The U.S. used the events of Sept. 11, 2001, to justify an invasion of Afghanistan. The invasion deposed the Taliban quickly.  In the last 14 years, other NATO countries joined the U.S.-led “coalition” that is currently occupying Afghanistan. Nevertheless, none of this intervention has been able to support a stable regime in Afghanistan.

According to the Watson Institute at Brown University, there have been 92,000 deaths due to war in Afghanistan since 2001, of which 26,000 were civilians. Another hundred thousand have been wounded or injured. These are minimum numbers.

Only a few of the atrocities creating “collateral damage” — rocketing of weddings, hitting schools and homes where someone reports a Taliban presence — make it to the corporate media.

The Taliban has over the last 14 years led the resistance to the occupation. In the past year, since the U.S. announced its plans to leave Afghanistan — something that seems unlikely now — the Afghan resistance forces have made gains around the country. The latest gain was the seizure of Kunduz.

Now, the U.S. bombing of the hospital has removed Westerners from the city who could witness any atrocities that U.S. and other coalition forces may carry out in order to secure the city for the occupation.