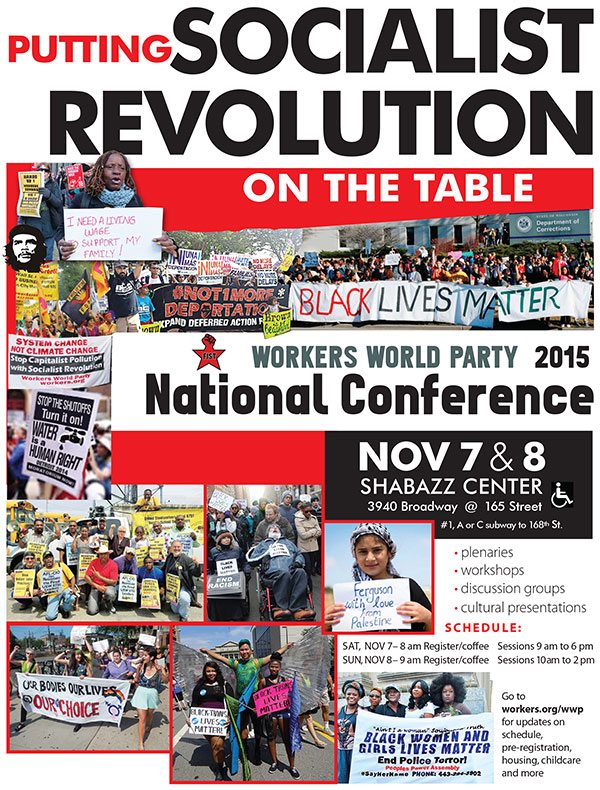 As workers and oppressed peoples are constantly being inundated with the likes of Donald Trump, Hillary Clinton, Bernie Sanders and others running for president, Workers World Party will be countering all the early election hoopla with its annual national conference Nov. 7-8 in New York City. The main theme will be “Putting SOCIALIST REVOLUTION on the table.”

This theme is intended to offer a real alternative for any worker, oppressed person or activist on what is needed to combat the institutionalized racism, poverty and war that is plaguing the globe.

The bourgeois candidates, be they Democrat or Republican, will say or do anything — most often something reactionary — to get the dollars they need to win upcoming primaries. That means they won’t utter one word about capitalism being the root cause of all the oppression and inequality in the U.S. and throughout the world.

Only an independent, anti-capitalist, multinational working-class party like Workers World Party has always spoken class truth since its 1959 founding to this very day.

From the end of World War II to 2007, the capitalist class of ruthless billionaire bankers and corporate bosses could count on the boom part of the business cycle to rescue their system from the bust crisis of overproduction. Those days are over. Ever since a tidal wave of housing foreclosures sparked the 2007-08 crisis, the capitalist system has been in a permanent state of doom and gloom. Even the bank bailouts of more than a trillion dollars couldn’t reverse it. The recent tumbling of global stock markets is one stark indicator. The enormous expansion of the productive forces has trapped capitalism in a dead end with no escape. The capitalists are seeking to solve the crisis of their system on the backs of the workers, the oppressed and the poor.

Whether it’s the alarming epidemic of police brutality, including murders of Black and Brown youth, women and trans people on a daily basis; or the unimaginable migrant crisis, where U.S.-NATO military aggression has forced millions of people — think Syria, Iraq, Afghanistan, Libya — to leave their homeland; or low-wage workers fighting for $15 an hour and a union; or working and poor women of color struggling for reproductive justice; or tens of millions of people fighting gentrification, mass incarceration, deportations, occupation, global warming and general austerity — in all cases the criminal is the genocidal capitalist system.

None of these crises can be reformed under capitalism. Even if it appears a distant goal, only socialism can resolve the crisis, and only through a revolution can the workers and oppressed win socialism. The experiences in Cuba, the Democratic People’s Republic of Korea, the former Soviet Union, the 1949 Chinese Revolution and others have shown that socialism as an economic system can only be realized by the full mobilization of the masses that uproots an oppressive system which inhumanely exploits their labor and their resources for profits.

Only socialism can liberate the workers from this exploitation and start the process of allowing them to use their labor to produce for their own needs as a class. Building a revolution for socialism in the most industrialized country — the U.S. — will be a giant leap forward to the downfall of capitalism worldwide.

The first step in this leap is to discuss these ideas in the framework of a political party. These are some of the fundamental issues that will be taken up at the 2015 Workers World Party conference. Be a part of this critical and timely dialogue. Go to workers.org/wwp for more information.