Despite the unemployment figures released Sept. 4, indicating that the rate of joblessness has gone down to 5.1 percent, the figures among African Americans remains more than twice that of whites. 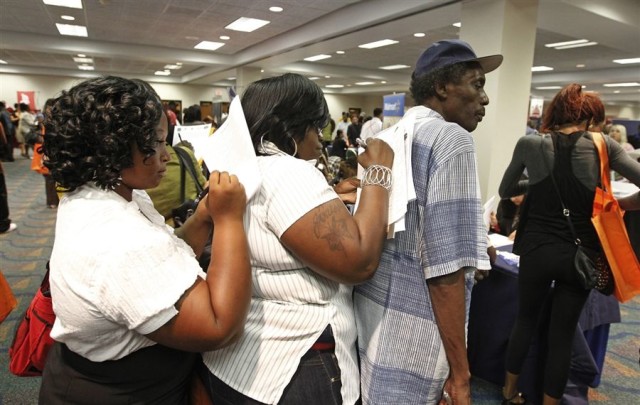 Historically, since the advent of the tabulation of jobless statistics, African Americans have maintained consistently higher figures for those looking for work who cannot find employment. This is a symptom of how national oppression overlaps class exploitation.

That African-American unemployment rates over the course of the last five decades are consistently double that of whites illustrates that institutional racism is still alive and well within the economic structures of the United States. The massive closings of industrial facilities in the last four decades, as well as outlawing affirmative action in many states, have served to restrict employment opportunities and fuel the substantially higher levels of poverty among the oppressed.

An article published in the Aug. 8 Atlanta Black Star says “that [the] percentage masks the unemployment disparities between white Americans and minorities across individual states. Right now the national unemployment rate for white Americans is about 4.6 percent, for Hispanics, it is 6.5, and for Blacks, 9.1.”

Compounding this problem is the failure of the federal government, the U.S. Congress and the corporate community to even address this glaring crisis. Instead, law enforcement agencies across the country have intensified the repressive apparatus of the state, killing African Americans in astronomical numbers and placing many more in the clutches of the prosecutorial offices, the courts and the prisons.

Latino/a unemployment continues to be disproportionately high as well, but African Americans have the highest rate in the country of the ethnic groups in the Economic Policy Institute study entitled “How the Economy Has Performed for Workers This Year.” The study, published Aug. 25, reveals that pre-recession and “post-recession” jobless rates for African Americans are basically the same.

The lower rate in 1969 coincided with the advent of urban rebellions and revolutionary mass organizing in the industrial, civic and educational arenas. The repressive apparatus of the U.S. during this period saw the wholesale attack on a wide range of organizations from the Southern Christian Leadership Conference, the Student Nonviolent Coordinating Committee, the Black Panther Party and other community and youth formations leading to political assassinations, forced exile and domestic imprisonment.

Oftentimes economists link unemployment in the African-American community with the lack of funding for schools in urban areas. Others include educational achievement with previous career experience.

Nonetheless, the upcoming generations of African-American students are finishing colleges and universities at increased rates, yet a degree is still not enough to protect African Americans from the systemic institutional racism still permeating the work force. With no governmental or judicial pressure to establish guidelines and quotas in hiring practices, it is almost impossible to prove in court the intent to discriminate.

The Center for Economic Policy Research undertook an evaluation of hiring practices in 2014, which revealed that 12.4 percent of African-American college graduates ranging in age from 22 to 27 were without jobs in comparison to 5.6 percent of college graduates overall in the same age category.

EPI Director of the Program on Race, Ethnicity and Economy Valerie Wilson was quoted in the Sept. 7 Black Enterprise magazine: “Even when you compare blacks and whites with the same backgrounds, blacks get less employment opportunities. When we say racial discrimination, we often have overt practices in our minds. But it’s taken on different forms. It’s not as blatant as it once was, but it still plays out in decisions and perceptions about blacks,” she emphasized.

The recent jobless figures from the Bureau of Labor Statistics and other sources fail to properly account for the decreasing labor participation rate, which is the lowest in four decades. Tens of millions of people have dropped out of the official labor market in large part because of the lack of jobs and the stagnation in wages.

The website of zerohedge.com on Sept. 4 notes that “the main reason why the unemployment rate tumbled to the lowest since April 2008 is because another 261,000 Americans dropped out of the labor force, as a result pushing the total number of U.S. potential workers who are not in the labor force, to a record 94 million, an increase of 1.8 million in the past year, and a whopping 14.9 million since the start of the second great depression in December 2007 while only 4 million new jobs have been created.”

Even according to the BLS, the labor participation rate is hovering around 62 percent, meaning that nearly 40 percent of the work force either is not seeking traditional jobs or is employed in the informal sectors of the economy.

In many African-American urban communities, such as Detroit, centers of employment are located miles outside of their neighborhoods. The lack of public transportation and non-ownership and access to vehicles hamper African Americans’ ability to reach areas where hiring is taking place even for low-wage employment. This absence of transportation resources, coupled with institutional discrimination, creates conditions that are potentially volatile socially.

In areas where rebellions and mass demonstrations have erupted over the last 13 months — specificly St. Louis County, Mo., and Baltimore — both have high rates of unemployment and poverty. Also the repressive nature of the municipal police and courts places further obstacles to obtaining employment due to the rate of traffic stops, citations and incarceration.

Until these issues are addressed on a national level, the situations prevailing in African-American communities across the country will remain tense. Anti-racist movements, including Black Lives Matter, must continue their efforts to halt the arbitrary harassment, physical abuse and killing of African Americans. At the same time the growing resistance to state-sanctioned violence must expand to include an economic program demanding jobs, quality education, public services and a guaranteed income.