Nearly a year and a half after the regional director of the National Labor Relations Board declared that Northwestern University football players have the right to unionize, the national board reversed that decision.

Citing the need for “stability in labor relations,” the NLRB claimed that it was denied the jurisdiction to determine whether college players should have the right to collective bargaining. This effectively denies all players the basic right of workers to settle disputes with their employer on issues such as pay, scholarships, benefits, health care and working conditions.

The NLRB argument goes like this: Northwestern University is one of 17 private colleges out of 125 Division 1 National Collegiate Athletic Association (NCAA) football teams. The original decision last March by the NLRB, which explicitly stated that students were employees, was only for private colleges. College football players for public universities in North Carolina or Wisconsin, for example, are unable to have a union contract because their states forbid public workers the right to bargain collectively.

Therefore, the federal government does not want to resolve this complex situation by giving “student-athletes” more rights that might encourage a challenge to the “right-to-work” (for less) laws of many states. Instead of taking a bold stance for workers’ rights, the board refused to claim its own authority.

The board failed to take up the primary question of whether so-called student-athletes were, in fact, workers, with the same rights as any other university employees. In the sickening ruling, the NLRB stated that Northwestern football players “bear little resemblance to graduate student assistants or student janitors and cafeteria workers whose employee status the board has considered in other cases.” (The Atlantic, Aug. 17) 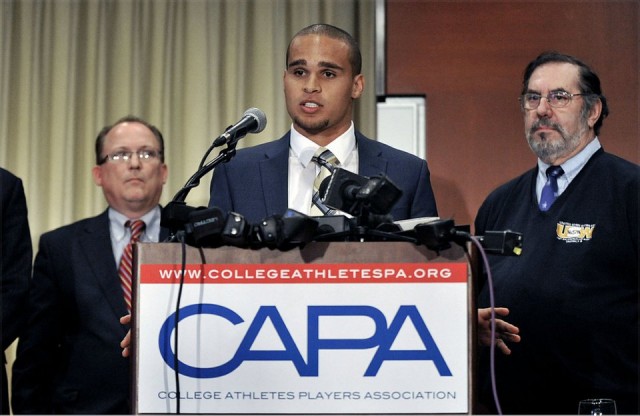 Northwestern football players, like student-athletes across the country, face 50-hour-a-week practices. They have little or no control over their academic schedules. Former Northwestern quarterback Kain Colter testified to the NLRB that he was pushed to pursue a less rigorous degree in psychology rather than studying to become a doctor because of academic scheduling conflicts with daily football practices.

The University of North Carolina, which is known for its excellent women’s and men’s basketball teams, was recently found to have enrolled thousands of student-athletes in fake classes over 18 years in order to make these students eligible to play.

The NCAA’s unwillingness to treat athletes as workers is a particularly shameful example of how higher education institutions in the United States have been focused on reproducing exploitation and oppression, rather than being institutions of social uplift. In a time of fiscal crisis, universities across the country have spent billions on new facilities, academic buildings and student centers, all of which pad the coffers of banks and developers.

The University of California system, for example, paid out over $8.9 billion for new projects in 2012, yet at the same time had to cut budgets by over $2.6 billion, requiring tuition hikes, laying off employees and hiring more temporary, low-wage adjuncts. (Washington Monthly, March 20, 2012)

Total national student debt continues to climb above $1.3 trillion, as more costs of education are shifted onto the backs of students. Now more than ever, a student-worker movement is needed to combat this growing exploitation on university campuses.

The vast majority of students and student-athletes are workers in training. That doesn’t shield them from the fate of other workers. Christian Taylor, a 19-year-old Black man and Division II college football player at Angelo State in Texas, was killed by a white cop in Arlington, Texas, earlier in August. Jonathan Ferrell, a former college football player who was working two retail jobs to survive, was killed by Charlotte, N.C., police in September 2013 while asking for help after a car accident.

Some 98 percent of college athletes never play a professional sport. Many are left with health crises caused by their work as athletes. According to Newsweek, studies have found that for every one concussion reported by college football players, they have suffered six suspected concussions and 21 hits to the head.

The National Football League Players Association, the union of NFL players, successfully sued the league for over $1 billion in damages related to concussions. Yet for the most part the crisis of health conditions for football players continues.

Why did the leadership of the NLRB unanimously deny Northwestern players the right to unionize?

As long as the exploitation of labor exists, workers will be uniting against the bosses. The struggle for college-athletes’ rights has a tremendous potential to ignite broader sections of the population into solidarity with workers’ struggles. The NLRB knows this. Hence the NLRB chose “stability” over affirming the basic human rights of these players.

The NLRB’s callous exclusion of college-athletes from the same protections and rights as other university employees exudes the class prejudice of the NLRB on all levels. The only rights this institution has ever confirmed are rights that workers have asserted through labor and political struggle. Laws only ratify the rights that are already practiced.

At a time when labor unions are struggling to survive endless attacks by the billionaire owning class, workers must never wait for the capitalist government to give us rights. We must take what is rightfully ours.